Oakland, Calif.—On Jan. 20 thousands marched, some again wearing “Pussy hats,” in the second annual Women’s March. Police decided beforehand to estimate the crowd at 50,000, though it was clear that many, many more were actually there in one of several huge marches in the Bay Area. 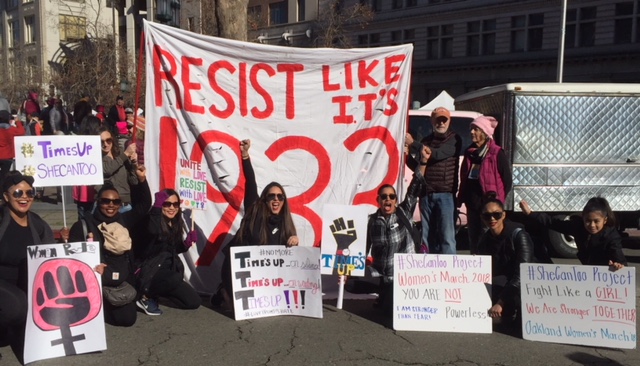 Like last year, the Women’s March was a focal point of resistance over President Donald Trump’s many-pronged hate-filled agenda. Women’s issues were a focal point; many “#MeToo” signs reflected the power of women’s voices in the massive movement that has exposed the depths of sexual harassment in everyday relations. Many signs had arrows pointing in all directions with the message “I’m with Her,” pointing to confidence in women’s own solidarity and self-activity. Others read “Laws off my body!” “Planned Parenthood never grabbed me by the pussy without asking” and “RESister.”

Protest signs tended to be hand made and aimed at the foreboding of this moment in which, as one speaker put it, “The whole future is at stake.” A huge banner proclaimed “Resist like it’s 1933.” Others called to “Support DACA/Stop Hate,” “Stop all deportations, Open borders, Citizenship Rights,” pointing to the inhumanity of Trump’s immigration policy. Several signs had pictures of the 1789 French Revolution, one reading “GOP Tax Plan = ‘Let them eat cake’ Marie-Antoinette.” Another quoted the Black feminist theoretician Audre Lorde: “I am not free while any woman is unfree even if her shackles are very different from my own.”

Many concerns including the threat to the environment, the inhuman neglect of Puerto Rico, and Black Lives Matters were represented, but there was also a sense that this movement is different; that everyone feels compelled to take a stand, or, as one sign read, “Silence is Compliance.”