Chicago—On Aug. 20, hundreds of people gathered downtown at “the bean” for Slutwalk Chicago and held a rally completely filling the plaza. The crowd of mostly women and a few dozen men decried the lack of safety for women, the lack of accountability for rapists, and the shaming of women who face harassment or rape. 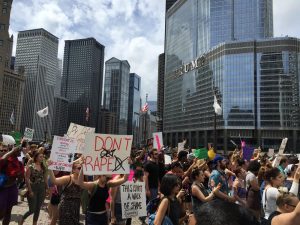 We reiterated that what a person wears or how she acts does not excuse others from being responsible for their own behavior. As the group began marching north on Michigan Avenue, we chanted slogans like “Yes means Yes, No means No, whatever we wear, wherever we go!”

TEACH BOYS NOT  TO RAPE

“Teach your sons not to rape” was another chant used on the march. It invokes the lamentable reality that parents usually only talk about rape with their daughters, and so they make girls feel as though they are responsible for preventing the actions of someone else. If and when abuse happens, they often feel the need to keep it secret to safeguard their reputation or someone else’s. I think it is important for boys to be taught about rape and inappropriate touching, not only because they might be more inhibited in their own behavior, but they would not have to be confused and ashamed to tell a safe adult about what is happening if they experience such behavior from someone else.

The march ended in front of the John Hancock building, which houses an upscale shopping center. Hundreds of people poured into the plaza before security guards appeared on the scene. When they did, they gave up any hope of moving so many people off the property. Instead, about 100 people sat down on the sidewalk and remained there for another hour, while dozens of women and one man participated in a speak-out, telling personal stories about having survived sexual abuse.

Those who spoke were asked by people next to them if they would like a hug, and hugs were given out generously. Many people were brought to tears by the speak-out, including a Trans woman who said it was the first time she felt safe among people who truly loved her and didn’t judge her, and it was the first time in a long time when she had any human contact whatsoever. If a speaker expressed hesitation or shame, she was encouraged by her audience who told her to take her time or that it isn’t her fault.

I experienced something very beautiful there on the sidewalk. It was the beginning of something like the dismantling of shame and divisions. Finding and creating safe space where we can overcome the emotions that serve to stratify us is revolutionary work.