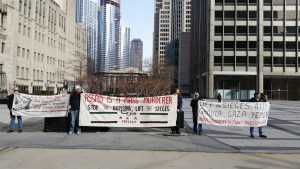 Chicago—The 400,000 people of Eastern Ghouta, Syria, have been under siege for five years, a siege that has tightened to the point where malnutrition has soared. Daily shelling and ferocious bombardment by Russian and Syrian government planes have killed hundreds of children and even more adults in February alone.

Medical facilities have been bombed and supplies cut off. UN Secretary-General Antonio Guterres departed from the UN’s diplomatic language to lament the “hell on earth” of Ghouta and plead for enforcement of a 30-day ceasefire that no one believed was real.

Less widely known is the recent wave of huge freedom demonstrations in Syria’s Idlib province—despite hunger and continuing Russian bombardment—opposing the government and jihadist groups linked to Al Qaeda. The Syrian revolution has faced many setbacks, including hundreds of thousands slaughtered by the Assad regime and its allies, but the fight for freedom rages on.

This is what motivated our recent demonstrations in Chicago in solidarity with the revolution and in opposition to the genocide. On Jan. 23 Free Syria activists joined a vigil in front of the Turkish Consulate opposing Pres. Erdogan’s slaughter in Afrin in Kurdish-controlled Rojava despite event leaders praising joint campaigns with Russia and Assad. 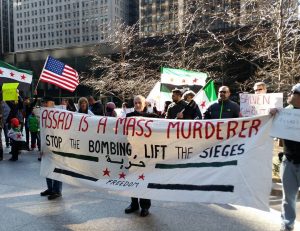 On Feb. 18 a band of protesters held signs demanding that the sieges of Ghouta, Yemen and Gaza be lifted, and aid to the people not be blockaded. Many passersby paused to read the signs, and gave thumbs up or other signs of support.

On Feb. 25 dozens of Syrian Americans and their supporters rallied again to demand an end to the bombing. The spirited chants in Arabic and English included calling for Assad’s downfall and “There is only one solution: revolution, revolution!”

← Readers’ Views, March-April 2018, Part 2
Letter from Mexico: How will Indigenous movement organize? →
This work is licensed under a Creative Commons Attribution-ShareAlike 4.0 International License