The world is still discussing Syria as if the Syrian people and their Revolution don’t exist. The people in the town of Maarat al-Numaan, in Idlib, have given the lie to that idea. For over three months now they have been demonstrating, daily, for freedom and dignity against the Nusra Front (Al-Qaeda), which attacked the Free Syrian Army; against ISIS; and against the Bashar al-Assad regime and Russian bombing. 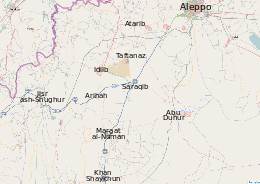 Maarrat al-Nu’man and the strategic M5 highway, the main Army supply route from Hama and Damascus to Aleppo.

This has not been easy. Nusra has fired on the demonstrators, and the regime has committed massacres by bombing the market place. But the revolutionary men and women, young and old, are determined to be heard. As one man said this week, “The Revolution took off in Daraa and Syrians carried it out in their heart, and now its renewal happens here.” And as one woman said, “Even if we have to stand here for a hundred months, we want our rights. We are here to say the word of truth.”

Significantly, the town was the birthplace of one of the greatest Arab poets, Al-Ma’arri (lived 973-1057). His poetry is comparable to the Roman poet Lucretius in its anti-supernaturalism, which prefigures the European Enlightenment in some ways. (That’s why Nusra beheaded his statue!)

The active side of the Reason and free thought Al-Ma’arri wrote of can be seen in this incredibly brave and principled freedom struggle of today’s Maaratis, a vital part of the Syrian Revolution. To be in solidarity with the people of Maarat al-Numan can begin a philosophic dialogue that crosses between cultures. What could be more important? In Al-Ma’arri’s words:

You’ve had your way a long, long time,
You kings and tyrants,
And still you work injustice hour by hour.
What ails you that do not tread a path of glory?
A man may take the field, though he love the bower.
But some hope a divine leader with prophetic voice
Will rise amid the gazing silent ranks.
An idle thought! There’s none to lead but reason,
To point the morning and the evening ways.

← Polarization in Brazil
Upheaval and crisis in Latin America →
This work is licensed under a Creative Commons Attribution-ShareAlike 4.0 International License