When billionaire hedge fund manager Paul Singer first approached Republican strategist Thomas Hofeller to ask for advice about whether he should fund a legal effort to allocate political power based only on a census of voting age citizens, Hofeller said that was impossible without a citizenship question. He then ran his own analysis on the possible political effects of using a base population of only citizens when redistricting. As he wrote in 2015, it would be “advantageous to Republicans and non-Hispanic whites.” Or as Black social commentator Jamil Smith put it recently, “One question about citizenship could help calcify white minority rule in America.”

The Constitution says that seats in the House of Representatives and electors in the Electoral College are to be geographically reallocated every 10 years according to a census of “all persons.” However, in the era of rampant ICE raids, a citizenship question would allow a workaround of that clause through an undercount of noncitizens. Phoenix resident Orlanda, who spoke to NPR without giving her last name, said: “People are very frightened about everything now… no one trusts anyone.”

Up to his death in 2018, Hofeller would never release his analysis to the public—while the legality of partisan bias in redistricting is disputed, racial bias is clearly not allowed. However, last May his daughter found hard drives containing his documents. She gave them to lawyers who argued the census case at the Supreme Court, who realized some text in the Trump Administration’s court filings was lifted from Hofeller’s writing. One paragraph matches word for word, detailing what a legal pretext for a citizenship question might be—the same Voting Rights Act argument put forward by Trump lawyers: “[D]ata on citizenship is specifically required to ensure that the Latino community achieves full representation in redistricting.” 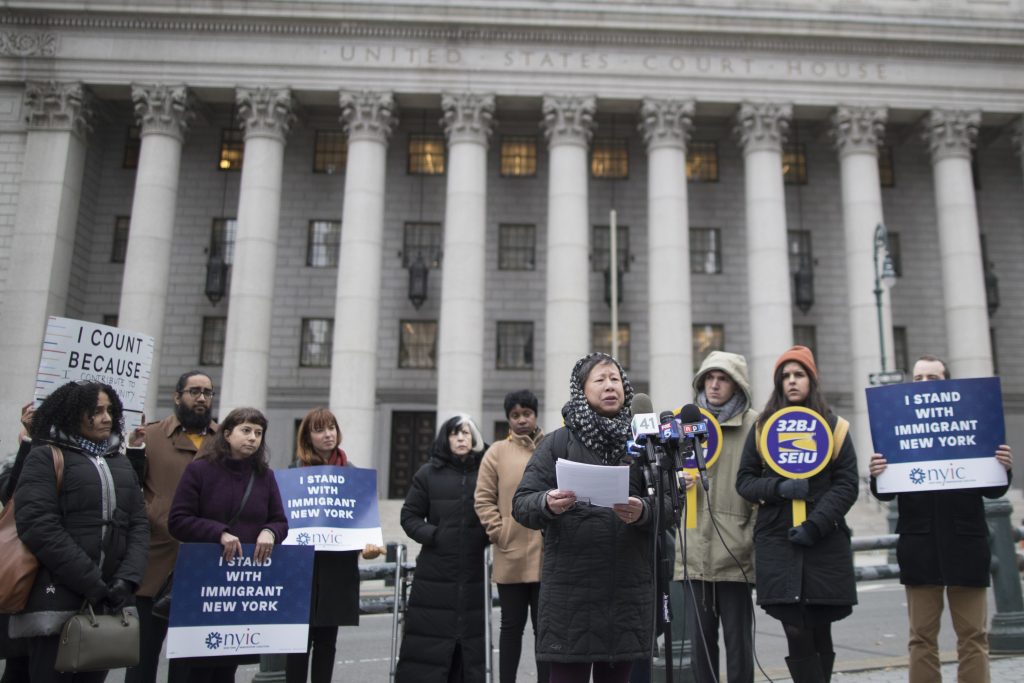 One of the many demonstrations against Trump’s plan to add a question on
citizenship to the U.S. Census. This one is in front of the U.S. Supreme Court.

On June 12, the ACLU asked for a delay of the imminent census ruling in light of the new evidence. If anyone could engage double-think and believe that a president who slurs whole demographics of people is also concerned about fair representation of racial minorities, they might be a bare majority on the Supreme Court. Five judges upheld Trump’s [Muslim] travel ban last year on the grounds that the court should not second-guess the Administration’s official statements as to motive.

On April 23, hundreds of people rallied on the front steps of the Court. They chanted, “Without status or with status, we are here!” Signs read: “It’s in the Constitution, everybody counts,” “No census without us,” and “We southeast Asians will not be invisible.” Concurrent rallies gathered in New York and Orlando, Fla., where signs read: “Caring for our children also means making sure they are counted.” Claudia Alarco Alarco told Al Jazeera immigrant families like hers are “asking for just treatment that we so rightfully deserve because of the contributions we have made in this country.”

Contributions made by immigrants include unpaid hours of labor and payroll taxation without benefits. Looking back at the Bracero Program and Chinese Exclusion Acts, payback for the extracted labor of Mexican-Americans and Chinese-Americans was often a final deportation of citizens and non-citizens alike. That general model persists in present time.

Boston activist Cassie Moreno wrote in a recent tweet: “It’s taken hundreds of years to start to rectify the legacy of who counted and who did not. We’re still fighting every day…It’s on us to stand up for everyone to have a stake, to have a voice, to be reflected.”

Only after slave rebellions and abolitionism—not to mention English textile workers’ prevention of a British entry into the Civil War on the side of the South—did the U.S. do away with the constitutional clause counting Black slaves as 3/5 of a person (all of which benefitted Southern white clout even as the labor power of Black people was stolen and any semblance of political self-determination denied). Native Americans counted as zero, but fought wars to defend their human connection to a homeland and in contemporary times pushed back against incursions of unmitigated resource extraction and forces of cultural erasure.

The continuing efforts to gain self-determination will be hindered by a skewed census. If a citizenship question proves to mean undercounting people of color, not only will that further dilute political representation, but it would spell the loss of federal dollars for infrastructure and social safety net programs, for example school lunches.

Undercounting minority neighborhoods also could result in more lopsided rollouts of the emergency response to a natural disaster. As much as Hurricane Katrina in 2005 revealed baseline callousness of politicians and police toward Black residents of New Orleans, poor census data would do still further damage.

The Census Bureau has stressed that personal data is confidential for 72 years. However, block-by-block data is not; it was used with chilling efficiency by the military in 1941 to abduct Japanese-Americans, many of them citizens, and put them in camps behind barbed wire. It’s easy to imagine that ICE will utilize block citizenship data.

Submitting a form while leaving a question blank should trigger an in-person visit, so non-citizens are not likely to do this. Not filling out a form at all translates into a situation where everyone else in the household will also go uncounted. This is why, in some of the most heavily immigrant communities, the General Accounting Office projects a potential census miss amounting to 17% of residents. A revival of humanist philosophy is needed to get us out of the dystopian spiral.