From the May-June issue of News & Letters

A cursory view of this decade in Amerika reveals a mounting tide of dissent. Moreover, the election of Donald Trump as president has escalated the dissent and intensified the sense of urgency for many people.

This is a response to what is perceived as an attack on people’s well-being, be it in the form of racial scapegoating of immigrants, giving carte blanche to police, defilement of woman, rollbacks on workplace and environmental protections and appointing a conservative to the U.S. Supreme Court.

In addition, Trump has held true to his class interest to stacking this Cabinet with business-minded people. With the blatant installation of a plutocratic regime, and with both houses of Congress Reublican-held, the interest of business will be the order going forward.

WHERE IS A BREAKTHROUGH?

The people in the U.S. are in a direr position demanding a revolutionary change. The fact that so many people have taken to street protest is an indication they are awakening to a stark reality engulfing them. An indispensable aspect of revolutionary change is a vigorous attack on the lies that are palliative in nature and cannot be allowed to continue unchallenged. For example, politicians claim of creating jobs or training programs to equip workers with skills for the jobs of tomorrow. The crucial questions to ask are: What is meant by the phrase “job creation”? What are the jobs of tomorrow? Politicians won’t have a definitive answer to those questions because they cannot actually create jobs or determine the jobs of tomorrow. But politicians can create government subsidies that amount to corporate welfare.

The dictates of capital create and determine the jobs of the future. Enormous tax deductions are given to corporate interests to locate in areas where operational cost is low, which now is the practice of politicians and private interests in economically depressed areas of the country. This, of course, presents a unique challenge. But it must be met to further unmask the inhumanity of capital.

There is also the need to challenge the proposition put forth to calm opposition to state policing. No longer can “community policing” be seen as the answer to police violence.

“Community policing” implies an inclusive nature to policing where community members would have an active role. Policing in the context of capitalism is one-sided. It only serves to deepen the divisions in communities of color. Having the police in communities of color who know and have a relationship with the people does not automatically translate into less police violence.

The militarization of police and its concentration in communities of color creates a volatile mix. That is why our focus must be on the culture of policing, its purpose under capitalism and its dismantling so as to establish a humane form of “community policing.” 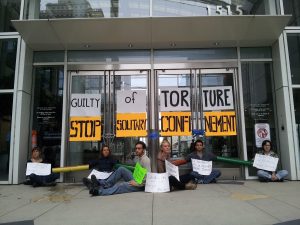 Throughout this country the movement of prisoners is at an all-time high. In general, prisoners are questioning the idea of criminality, specifically when there appear to be inherent biases in the rules and regulations that govern the administration of prisons.

The biases manifest themselves in the form of obstructions to prisoners having the ability to express their humanity. In other words, prisoners have taken control of their lives by employing the initiative and amassing credible literature and developing self-help programs unique to their culture.

Prisoners like this are preparing to assume their role as participants in the creation of a humanist society.