Chicago—Hundreds of people joined the People’s Climate March here on Oct. 14. It was one of 170 events in 47 states demanding serious action to stem climate change as the world’s nation-states prepare for their climate talks in Paris starting Nov. 30. Nationwide, many thousands of people participated, including 1,000 each in Seattle and Miami. 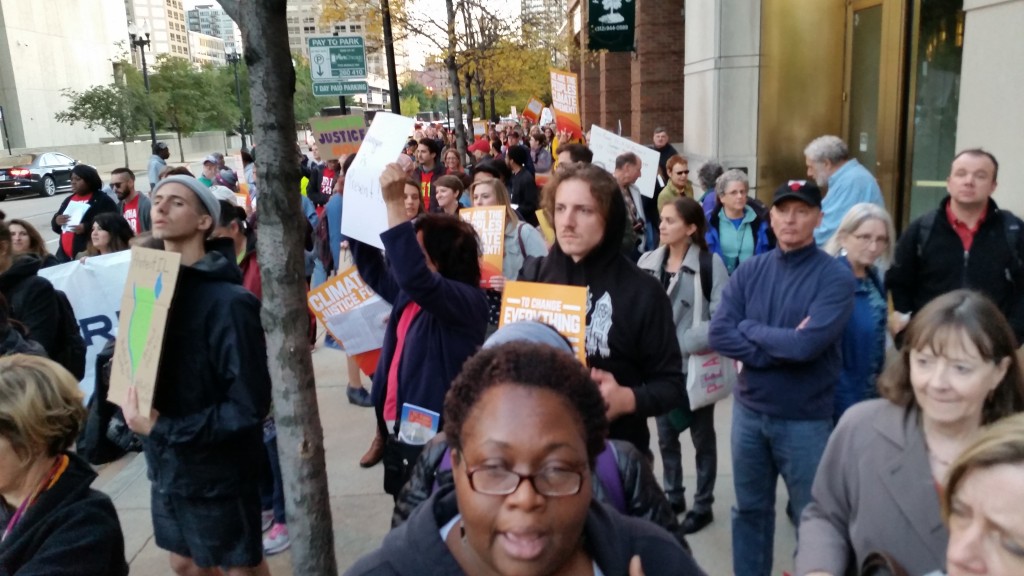 The rallying cry was “Climate Justice!” Unlike many climate change protests of the past, this one featured a strong presence of Black, Latin@, Asian people and workers.

Climate justice was understood by many to include opposing environmental racism, exploitation of workers and many other forms of injustice. As always, there were many young people.

The march stopped midway at the Haymarket Memorial, the site of the May 1886 rally for the eight-hour workday that became symbolic of both the repression of the labor movement and May Day as a revolutionary labor holiday. There, one of the speakers was Adriana Alvarez, a McDonald’s worker from Cicero, who said: “We have to worry about our children’s health and our own health, but we can’t afford healthcare and health insurance with the wages we make. That’s why low-wage working families and people of color have to do something about this.” 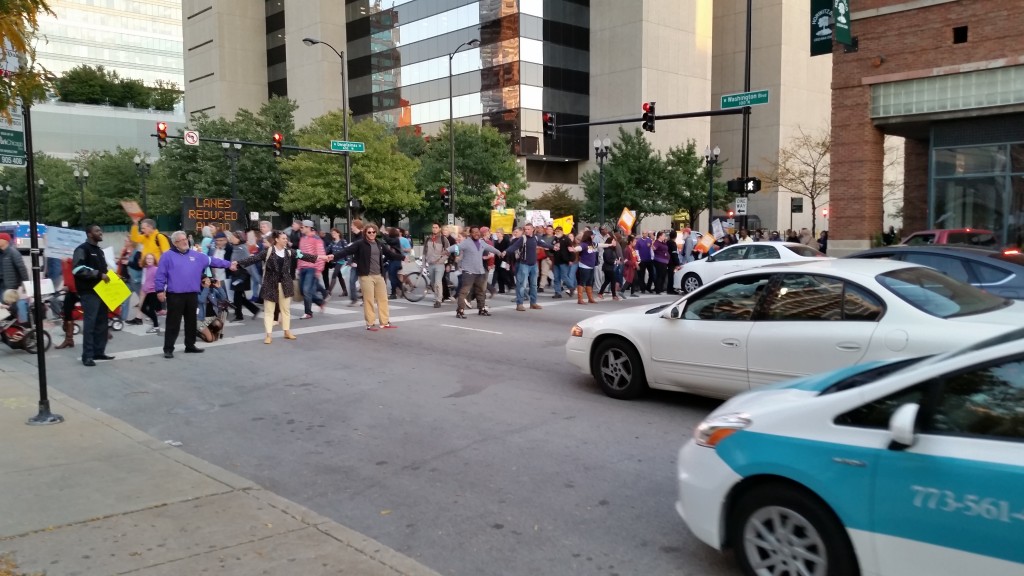 Marchers stopped traffic so the march could proceed safely. Photo by Franklin Dmitryev for News & Letters.

Participants held a broad range of views about what is needed to achieve climate justice. While some marchers praised President Obama’s executive actions to reduce carbon emissions, many others stressed the need for a much deeper transformation of the economy, and often of the whole society. Here is what some of the marchers told N&L:

A disability rights activist: Climate change and pollution are causing more disabilities that we can prevent. I see it in people I work with in the inner cities, the number of kids with breathing problems, asthma, seizure disorders, things that are related to toxins. There are still kids who have lead poisoning from paint. It’s ridiculous that this year we still have this problem. 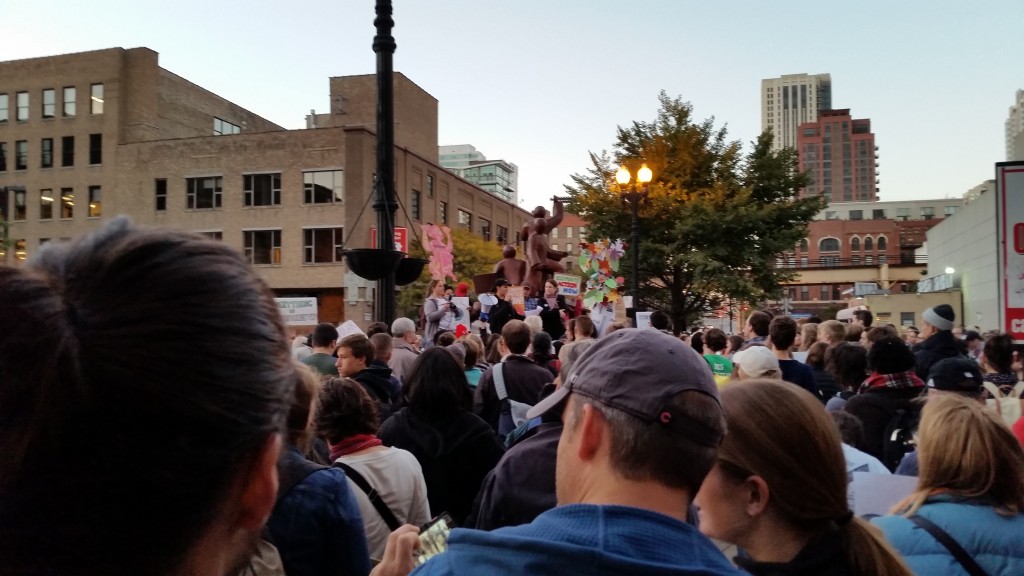 Speakers and crowd when the march stopped at the Haymarket Monument. Photo by Franklin Dmitryev for News & Letters.

A woman from Oregon: In Oregon we have all kinds of fires and very little rain, and that’s usually not the case. Our state is burning up. The Paris summit is about to happen. I’m here to make them listen to the people who want to be heard.

Brandon N.: We’re messing up the planet with fossil fuels. The poor are harmed the most. Pollution brings things like asthma. I have asthma myself. My mom thought it was partially because the world was getting more polluted. The wealthiest people are the ones who benefit the most from consuming fossil fuels. 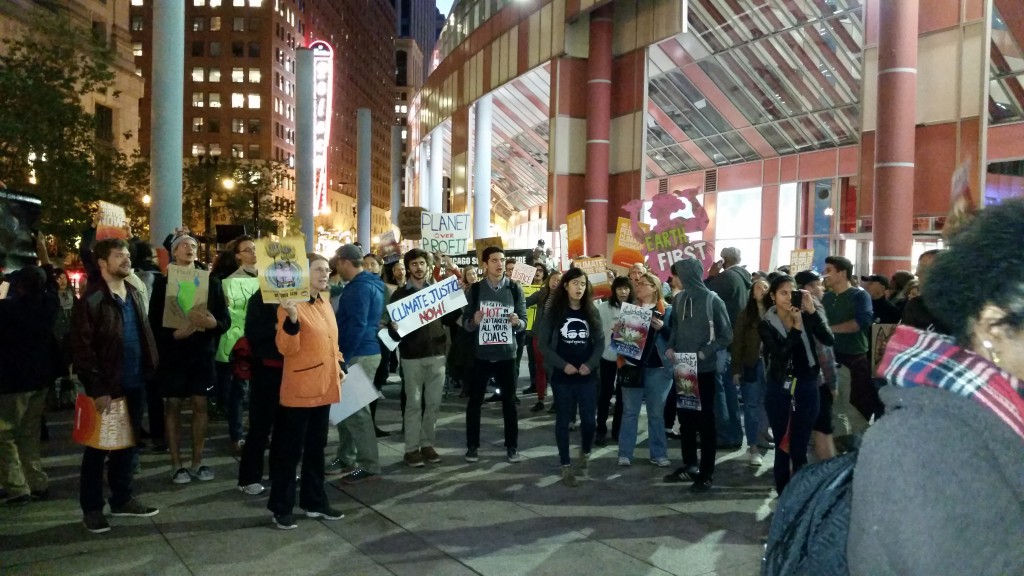 A youth: It’s going to be difficult to reverse the really unequal status quo. We aren’t just facing climate issues because we haven’t figured out how to use alternative energy. People have significant interests in using coal and profiting off the things that ruin the planet. Right now most things in our society are determined by the priorities of the people who are profiting off of things. We need to be prioritizing what is best for most people. We should restructure the economy, our political system, all of our public institutions, and stop privatization.

Many are still trying to work it out, but feel that there is something deeply wrong with a society that is trapped in growth for growth’s sake, and that is still built around fracking, mining and burning oil, coal and natural gas, decades after science showed how catastrophic that is likely to be for humanity. Pretty much everyone agreed that the oil and coal companies and others who profit from fossil fuels are the enemy—implicitly going deeper than the official slogan, “To change everything, we need everyone.” 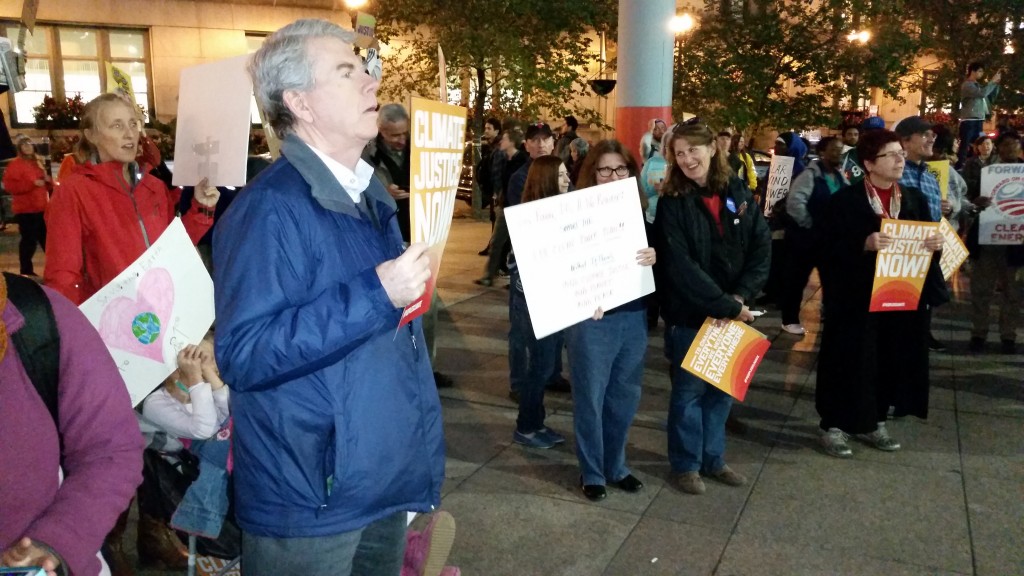