Tucson, Arizona–Although obvious that he was not the first person to set foot on a Caribbean island, popular lore has credited Christopher Columbus for “discovering” two entire continents. The U.S. capital district, a major river in the Pacific northwest, countless cities and towns including two state capitals, a Canadian province, a large country in South America, and a national currency are among the long list of things named after the famous explorer.

A descendent of Italian and Irish immigrants to Chicago, I understand the desire for an ethnic hero that would demonstrate the worthiness of Italian Americans to gain acceptance from the white power structure of the early 20th century. This same structure may have exploited the situation to win support for fascistic political ideologies: one literal case is that of Italo Balbo, Italy’s Air Force Marshal during World War II, who still has a Chicago street named after him. 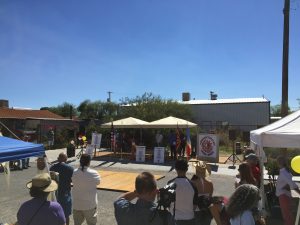 In the past decade, Indigenous communities throughout the U.S. and beyond have been organizing against the false dogma of discovery, which effectively erases them from history. This year in Tucson, Arizona, on the day commonly known as Columbus Day, there was a block party held to commemorate Indigenous Peoples Day. A local organization called the Indigenous Alliance Without Borders sponsored this all-day event, which included spoken word, musical performances, a bounce house for the kids, and a push to get everyone in attendance to sign a petition to establish Indigenous Peoples Day statewide.

Already several municipalities nationwide have officially established the day to commemorate Indigenous people. In some cases, cities and towns that used to officially sanction Columbus Day have now dropped the designation. In Arizona, the cities of Phoenix, Tucson, South Tucson, and Guadalupe, and the county of Pima have designated the second Monday in October exclusively as Indigenous Peoples Day. (The holiday is recognized statewide in Vermont and under the name Native American Day in South Dakota.)

It isn’t as though there aren’t Italians or Italian Americans who exemplify livelihoods of expanding human freedom, not eugenics. Danilo Dolci comes to mind–the Sicilian social activist who organized people to perform governmental functions themselves, in opposition to the official government plagued by Mafia corruption. To me, the philosophy that Dolci’s life invokes is highly preferable to the colonial one that is implied if we venerate Columbus. Hopefully, the deification of Columbus continues to wane because of determined efforts by Indigenous activists and allies.

← Policies of exclusion challenged across the board and across the border
No to Trump! No to fascism! Fight for a new human society! →
This work is licensed under a Creative Commons Attribution-ShareAlike 4.0 International License