Protests of thousands welled up in city after city in the wake of Donald Trump’s shocking election victory. High school students walked out of classes in several cities. Highways were blocked from Los Angeles to Iowa City, from Miami to Atlanta. Denouncing racism, sexism and fascism, demonstrators—of all races, women and men, LGBTQ and straight, very many of them young—are clear about the significance of a Trump presidency. 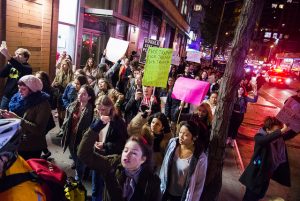 At the same time, the naked reality of Trumpism was revealed in a spate of physical attacks against people of color and calls for men to celebrate the election by sexually assaulting women. A group of students yelled “white power!” while walking in a Pennsylvania high school carrying Trump signs, others chanted “Build the wall!” in a Michigan middle school, and people yelled racial slurs at Wake Forest University and Wellesley College. White private school students on a New York City bus told Black students they should sit in the back. Blacks and Latinos have reported white men spitting at them and telling them to “go back to Africa” (or “where you came from”). Graffiti saying “Black lives don’t matter and neither does your votes” appeared in Durham, N.C., and “Make America white again” in Wellsville, N.Y. Cars, houses and offices in Philadelphia were vandalized with swastikas, “Trump Rules,” and racist and sexist slurs. Social media were filled with threats against minorities and women. The green light has been given to open racism, rape culture and hate crimes, including by the police.

Internationally, Trump’s victory strengthened forces of fascist reaction from France’s National Front to Russia’s Vladimir Putin, and the latter’s clients such as the self-proclaimed “socialist republics” of eastern Ukraine and the genocidal Bashar al-Assad in Syria. At the same time Trump is opening the door to military confrontation with Iran, having vowed to scrap the 2015 international nuclear deal with that country.

UNDER THE WHIP OF COUNTER-REVOLUTION 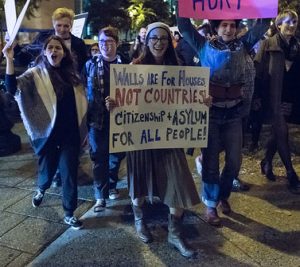 The whip of counter-revolution deepened and brazenly displayed its global scale with Trump’s electoral victory. There can be no doubt that this is a very serious setback for all the oppressed and for all freedom movements. What Trump represents above all is counter-revolution, and, more specifically, fascism, which is the excrescence of capitalism under threat. His rise is the index of this system’s crisis and bankruptcy of thought, which the Left has hardly met with a truly revolutionary perspective.

Where 20 years ago “anti-globalization” was a cry of the Left, the billionaire Trump poses as the champion of middle-class and working-class whites against free trade, combined with a scapegoating of immigrants. He did not, of course, offer any real solutions to the effects of trade agreements and globalization on jobs and wages, nor did he address the other structural factors, including automation and capitalism’s crises connected to the fall in the rate of profit.

Hillary Clinton adopted some of Bernie Sanders’s specific proposals but remained a neoliberal “New Democrat,” like Bill Clinton and Barack Obama before her. Her message that the economic crisis is past and things are getting better rang hollow for too many people.

What neither Clinton, nor Trump, nor even the socialist Sanders acknowledged is that capitalism itself, by the way it operates, is always decimating existing jobs, businesses, industries, and even regions. Today, parts of the middle class are falling into the working class, and more privileged sectors of the working class are falling down to low-paid service jobs, the “gig economy,” or unemployment. Being in that situation can spur someone to look to the future, to a new human society beyond capitalism, or to the past. If the power of the idea of freedom is muted, and an emancipatory vision of the future is not being articulated and heard, then a void is opened for a con man like Donald Trump to fill with a fabricated mythic past.

RACIST, SEXIST VISION OF THE PAST FOR OUR FUTURE

Targeted at middle-class whites, especially men, that vision of the past includes putting the Others “in their place”—immigrants, African Americans, women, all of whom are scapegoated as responsible for white men losing ground. A vision of the past that rolls back all the gains made by people of color, women and workers in the last century and a half is outweighed in too many minds by Trump’s fake promises of prosperity—such as bringing back the jobs lost in the coal and steel regions of the “Rust Belt” and Appalachia. His game plan is to distract from those fraudulent promises by eliminating labor, safety and environmental regulations, and by attacking scapegoats, in the first instance with more mass deportations and giving the police a free hand under the cry of “law and order.” His supporters bought into the demagogue’s Big Lies and handed him a platform to inundate the country with this racist, misogynist, authoritarian false consciousness and provocations to violence. 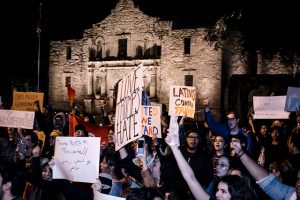 The media’s description of Trump’s base as “working class” is distorted. They lump in the petty bourgeoisie—small business owners, managers and bureaucrats—with the working class, as long as they lack four-year college degrees. In reality, Trump lost the vote among people with household income under $100,000. But fewer of them vote—and Republicans made voting more difficult for them, especially in Black and Latino areas. Some of his greatest supporters are those paid wages to suppress the working class—police, prison guards, border guards—but to count that as working-class support is abstract sociological empiricism.

Trump did win the white vote, including a significant number of white workers who had voted for Obama. But it was not enough in the end to gain him a majority. Like George W. Bush in 2000, he lost the vote but will be anointed President due to the Electoral College, which was invented by the Founding Fathers to inhibit democracy and protect the institution of slavery.

The Republicans will have single-party control of the federal government and of about half the states—partly due to gerrymandering, suppression of votes by people of color and young people, and the racist denial of voting rights to millions of people convicted of felonies. Soon Trump will appoint at least one Supreme Court justice, and probably more, locking in a reactionary court for the foreseeable future. The Religious Right is celebrating their deal with the devil, having decided that destroying legal abortion and LGBTQ rights was an end that justified overlooking what they had previously claimed to be paramount, the candidate’s faith and character. As Trump and Congress trample birth control, healthcare, the social safety net, labor unions and environmental regulation, and wipe out safeguards against surveillance, voter disenfranchisement, suppression of radical dissent and police violence, do not expect the Supreme Court to stand in their way.

Nor is the Court or Congress likely to make a fuss if Trump carries out his promise to bring back torture, or if his plans for intensifying mass deportation lead to an expansion of the already existing horrors of the immigrant detention centers.

On climate change, Trump is committed to a course that would be catastrophic for the entire human race. Having called climate science a hoax perpetrated by the Chinese, he aims to kill international agreements and all climate action at home. Under his policies, the goal of limiting global warming to 2°C would be out of reach. He promises to expand coal, oil and gas extraction and push through the Keystone XL pipeline. His personal investment in the company building the Dakota Access Pipeline, currently the focus of resistance camps in North Dakota and Iowa, makes his stance on that obvious.

TIME TO FIGHT IN BOTH ACTIVITY AND THOUGHT

This must be stopped. To wait four years for another election would be to give up. That nothing short of revolution can suffice is clearer than ever, as unprecedented reaction is entrenching itself in all three branches of the government with a fascist at its head, doubling down on climate change denial and nuclear-armed militarism, so that civilization’s survival is called into question unless this rotten political and economic system and its ideology are abolished. We must fight this backward movement here and now and in doing so not disarm ourselves by failing to project the need for social transformation fundamental enough to pull out fascism’s roots in capitalism, which is intertwined with racism, sexism, heterosexism and imperialism. Let us not limit ourselves to being against this new form of fascism, or even against capitalism, but release the power of the freedom movements by aiding their unity with the philosophy of freedom for the reconstruction of society on totally new beginnings.

What Raya Dunayevskaya declared has never been more urgent: “The totality of the world crisis today, and the need for a total change, compels philosophy, a total outlook.” This is the missing link for concretely projecting a truly revolutionary perspective.

Many in various movements are stating their resolve to keep fighting. Confidence in the power of the idea, which is at the same time confidence in the masses, is what will allow us not only to keep fighting, but to keep working at the needed rethinking, the unity of theory and practice so that revolution can succeed and bring forth a new human society.

–The National Editorial Board of News and Letters Committees, November 12, 2016