There is no question that women are a vital part of the movement in Algeria since it erupted on Feb. 22, fighting to bring down le pouvoir—the power structure—that has been running the country and their lives since 1999.

On March 8, International Women’s Day, unprecedented numbers took to the streets throughout the country demanding not only women’s rights but freedom and real democracy.

Being in the streets is itself a move for liberation, and women are involved in all aspects of the struggle. Some have created a “feminist square” near the University of Algiers and promptly issued a manifesto that called for ending the reactionary Family Code and for the new Algeria being created to guarantee equal rights for all.

YOUNG AND OLD TOGETHER IN STRUGGLE 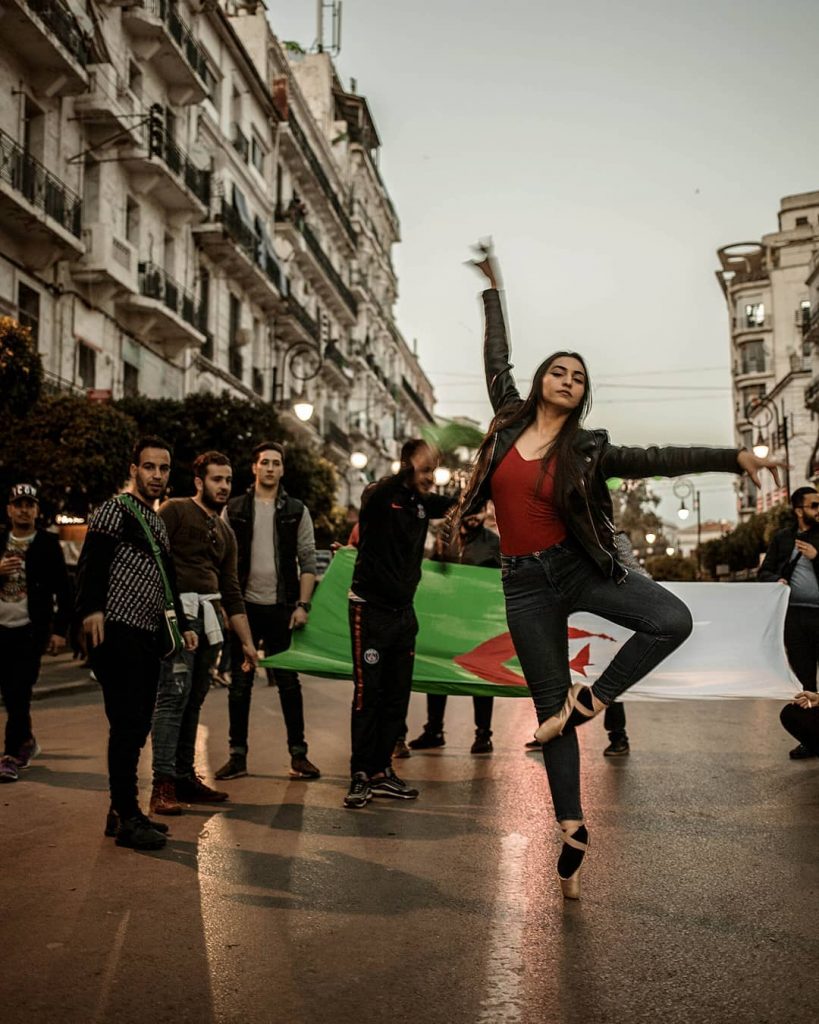 Young women are active on social media, including creating the iconic photo of the 17-year-old ballerina dancing on point, a photo that went viral because it caught the hope, joy and possibility of change driving the movement.

Older women too are part of the struggle, from women who fought for Algerian independence from France (1957-62)—like Djamila Bouhired, who advised, “Never let these agents disguised in revolutionary outfits take control of our liberation momentum”—to a woman in her 70s who alone confronted a blockade of riot police who were keeping her from getting to the demonstration. “I told them this is my country.” She said, “There’s nothing for the young generation. No jobs, no houses. They can’t get married. We want this whole system to go.”

She joins the youth like science student Amina Djouadi, who told a reporter: “We are not afraid anymore. We are young and full of bravery. The people are heroes.”1“Algeria protests: Youth lead the movement for change,” by Orla Guerin, BBC. News, April 14, 2019.

Although the fight for freedom in Algeria is a new face of the Arab Spring, what makes it different is that the women and youth have the triumphs and failures of those world-changing events as part of their lived history. They see how Egyptian President Abdel Fattah el-Sisi stole the revolution; they see the destruction of Syria and the genocide of a freedom movement.

Furthermore, these activists—particularly the women—have an historic memory of the struggle for national liberation against French colonialism where over one million died, and the decade-long civil war in the 1990s between the government and the Islamic Salvation Front (FIS). Women were the first attacked by the armed Islamic groups, along with intellectuals. Everything the Taliban did in Afghanistan, the FIS tried, and often did in Algeria.

They massacred entire villages, mowed people down at checkpoints; high school girls who refused to wear the hijab were shot in the head; women and girls who rebelled against rape or forced marriages were brutalized and then murdered.2“Algerian Women in the Liberation Struggle and the Civil War: From Active Participants to Passive Victims?” Meredeth Turshen, Social Research, Vol. 69, No. 3, Fall 2002.

Algerians have learned through a bloody history that they cannot trust the military, elected officials or politicalized Islamists, they can only trust themselves. Women know this in our blood. And while the Algerian revolution-in-the-making has much going for it, counter-revolution lurks.

Just as the women in Iran were attacked by some in the Iranian left in 1979 when they marched against Khomeini’s mandate to wear the chador, showing that the women recognized the danger of the counter-revolution to come, so some in the movement in Algeria have turned on their women comrades.

The women who created the feminist square were shoved, screamed at and had their signs torn to shreds. In a widely viewed video, a man threatened: “You women calling for freedom…who yell at people, and who say you are looking for freedom, freedom for women…you’ll be covered in acid!” Women again are being told, including by many in the movement, to wait. One woman shoved at the feminist square said, “In Bejaïa, people came up to me and told me that it was not the right moment to call for women’s rights.”3“Women’s rights activists in Algeria threatened with acid attacks,” author referred to as “our Observer.” The Observers, April 5, 2019.

But women are not waiting because included in their historic memory is how the women who fought alongside the men against the French were also made to step back after the conflict was over. It took decades to get to where they are now, they won’t go back. We stand in solidarity with our sisters and brothers in Algeria.

← Abahlali baseMjondolo speaks out for immigrants
Women WorldWide: May-June 2019 →
This work is licensed under a Creative Commons Attribution-ShareAlike 4.0 International License