That Turkey’s President and wanna-be “Great Leader,” Recep Tayyip Erdoğan, is a misogynist authoritarian monster is no secret. In March 2021 he pulled Turkey out of the Istanbul Convention—the international treaty on preventing violence against women, which has soared under his regime. In April 2022 his public prosecutors demanded that We Will Stop Femicide (WWSF), Turkey’s largest women’s rights group, be disbanded for “activity against law and morals.” When he’s not destroying women’s organizations, he sends his police every International Women’s Day to beat protesting women and shoot them with rubber bullets. 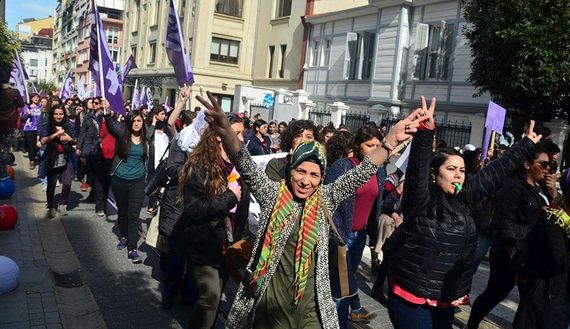 The general secretary of WWSF, Fidan Ataselim, said: “For us, this is an attack on all women in Turkey, on all social movements, on the entire democratic public opinion.” The Guardian reports that WWSF “has a nationwide network providing legal support to survivors of domestic violence, as well as collecting data on femicide, monitoring trials and organizing rallies. [Erdoğan’s demand for its destruction] comes amid a rise in femicides in Turkey. WWSF estimates that 416 women were killed because of their gender last year, and a further 72 murdered from January to March 2022.”

When the news broke, demonstrations broke out in several cities in Turkey, including Istanbul and Ankara. The real reason for the attack on WWSF is their ongoing critique of Erdoğan, especially for pulling Turkey out of the Istanbul Convention and ignoring the worsening conditions for women under his rule. In Istanbul, hundreds of protesting women along with domestic abuse survivors and their friends and relatives shouted: “Don’t prosecute women, but murderers!” Nihat Palandoken, whose young daughter was murdered in 2017, said: “These women are fighters. I wanted to be there to support them.”

← Biden complicit in border brutality
COVID and the Diné →
This work is licensed under a Creative Commons Attribution-ShareAlike 4.0 International License