“WOMEN AND DISSIDENCE IN DEFENSE OF THE TERRITORY”

Isthmus of Tehuantepec, Mexico—Here in the Isthmus [in southeast Mexico, between the Gulf of Mexico and the Pacific Ocean] we are experiencing by leaps and bounds the consequences of the evil called progress. The ones who are feeling it the most are women, girls and dissidents, because within this misogynistic and patriarchal society we continue to be considered a minority despite being more than half of the population. 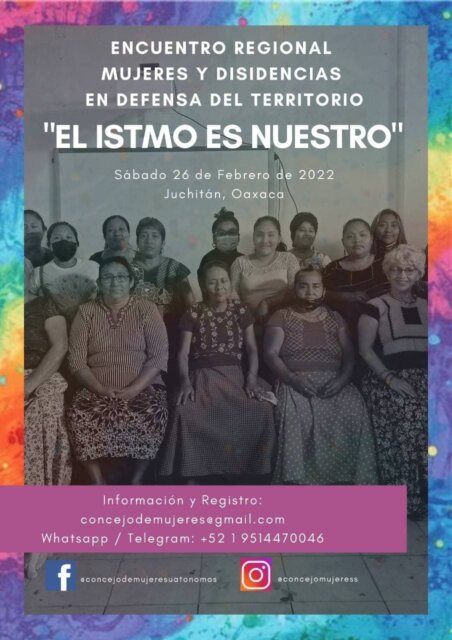 We have to put our bodies on the front lines to fight for the rights that should be ours, but instead restrict us and take away our ability to make decisions about ourselves.

The excessive violence that is currently being experienced in the Isthmus of Tehuantepec claims the lives of women and girls who are disappeared and murdered every day. So far in 2022, approximately 12 women have been murdered in the region.

VIOLENCE AGAINST WOMEN IS ‘NORMALIZED’

This violence is nourished by the folly and collusion of the judicial and administrative authorities that try to normalize violence against women as a fact of everyday life.

This current government, just like the previous ones, wants to impose development projects on us that obey capitalist and patriarchal logic, which is nourished by the labor of thousands of men, mainly, and the unpaid work of the women on whom they impose care work.

They seek to turn our floors into cement slabs, our houses into commercial shops, our air into poison and our bodies into their source of money.

We have listened and learned from the sisters further north: In Juárez where the maquiladoras became the death sentence for thousands of sisters, or in Ciudad Nezahualcóyotl, on the outskirts of Mexico City, where industrialization and urbanization swallow day by day dozens of other sisters.

For this reason, it is essential to grow, out of struggle and resistance, protection and defense strategies for the territory—which includes the physical body—of women, girls, gender-based dissidents and elderly women who have decided to put a stop to political demagoguery and act to defend the territory as a means of subsistence.

If we do not confront this rampant violence, we envision a bleak future, as women and girls have experienced in other regions of Mexico in which their territory of life was turned into a commodity for industry.

WORKING TOGETHER TO STOP VIOLENCE

For this reason, it is essential to convene the women, girls and dissidents of the Isthmus of Tehuantepec and other neighboring geographies who wish to join the fight for the defense of life, to reach agreements, listen to our concerns and seek means to continue building the resistance.

As women and dissidents, we are close to the land, we can draw routes to walk together and confront the extractivist and patriarchal system that tries to turn our territories, bodies and spirits into commodities.

We invite the sisters with whom we have shared spaces of wisdom and healing, to meet again, talk and continue weaving our resistance.

It is essential to turn our words into action in the face of the threats we face as women and gender-based dissidents in the face of the project of death of the Interoceanic Corridor [a proposed rail link across the Isthmus between the Atlantic and Pacific oceans] and its poles of development; in the face of the transformation of life in our region due to wind projects; in the face of the naked violence on our bodies and the high levels of femicides, Trans-femicides and hate crimes, and all types of violence that we experience…

Never again a Mexico without us!