After a game of chicken that cost more than $200 million, voters in California balked and approved Proposition 22, which will allow app-based transportation and delivery sector employers to keep classifying their employees as private contractors. This means they will not have to offer workers any of the benefits afforded to employee-classified workers under state law. Up to the eve of the election, Uber and Lyft had threatened drivers and passengers that they would close up shop in the state if their measure failed to pass. They also padded the measure with piecemeal concessions like a lump sum healthcare stipend and guaranteed wage in order to confuse voters. 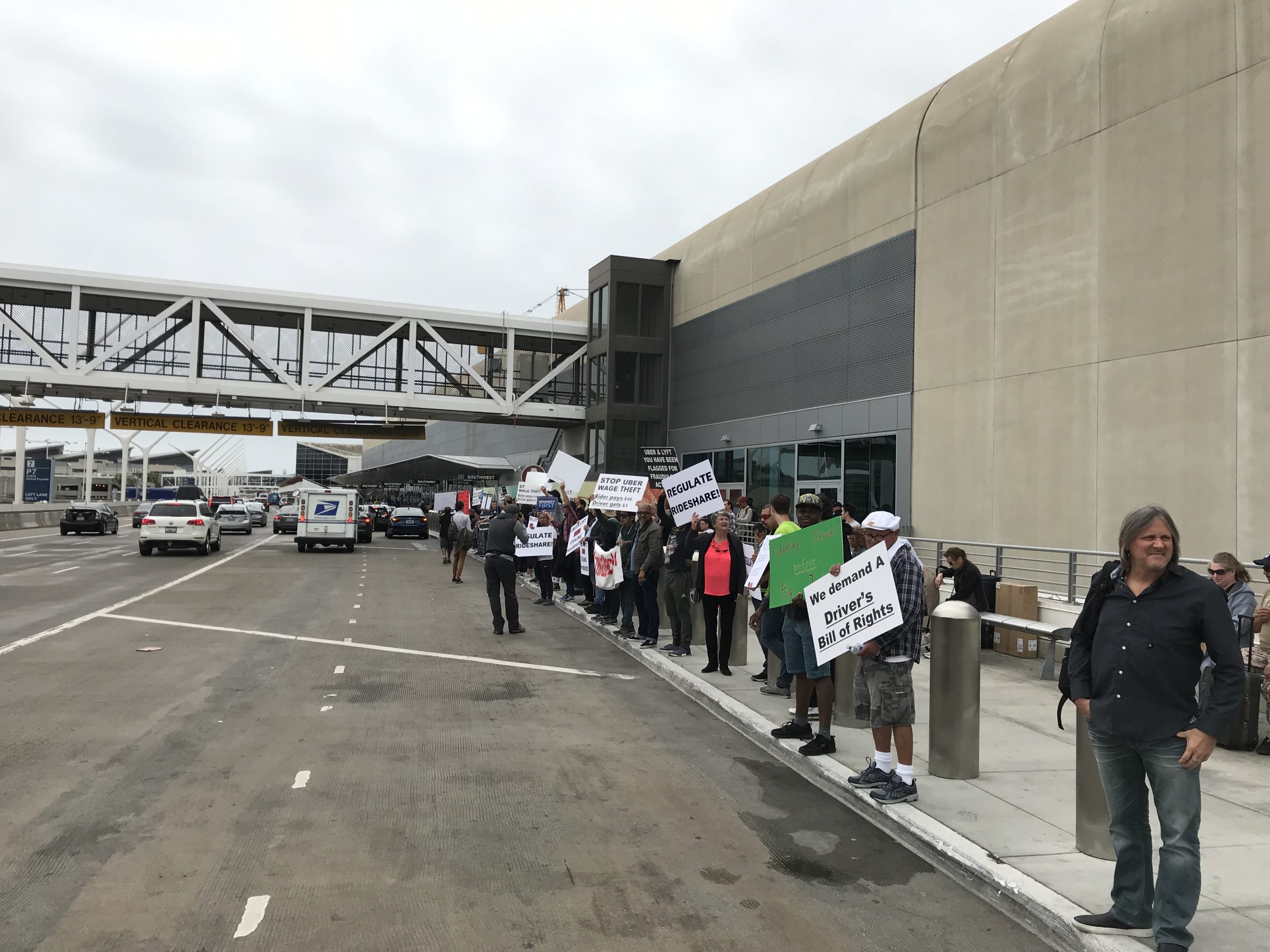 Uber and Lyft drivers and supporters at a 25-hour protest at LAX airport on March 25, 2019. Photo: Buddy Bell for News & Letters.

Yet, Harry “Rideshare Guy” Campbell explained how the companies’ computer algorithms might easily let payroll departments shirk even these lackluster commitments: “If the companies flood the app with drivers and you don’t get any rides, the minimum wage is useless, and there’s no bargaining or structural aspect that prevents them from giving drivers benefits and then just lowering rates in the future.” (Sacramento Bee)

In this year of lethal airborne pandemic, some of those who have been able to find and keep a job became dependent on ridesharing apps like Uber and Lyft for their transportation needs. People without cars who want to go on a casual trip have faced buses and trains that say “essential travel only.” Now, in return for accepting the ballot measure to keep ridesharing apps in operation, passengers are going to keep encountering drivers who don’t have straightforward healthcare coverage and who must compromise their immune systems by working ever longer hours because of the low rate of pay.

Lyft driver Edán Alva told Gig Workers Rising his dilemma: “When you need to actually exist on this income and pay things like health insurance, and just put food on the table, and pay rent and all the other costs in the Bay Area, it’s impossible to exist on a Lyft income.” Full-time drivers must also set money aside every year to pay the second half of the payroll tax, levied on anyone who is classified as self-employed.

In October, Uber drivers in San Francisco sued for a court injunction to prevent Uber from forcing them to read propaganda about Prop 22. For months, Uber drivers had to scroll through a position paper about Prop 22 before signing on to the app and starting work. After scrolling through Uber’s screed, they had to press either “Yes on 22” or “Ok.” Although there is no way to be sure unless Uber’s algorithms are someday exposed, logic would suggest that the driver’s selection went on some kind of virtual employee record. Electioneering by bosses in the workplace is illegal in California and most other states, but ultimately the court swept this abuse under the rug.

Now on the heels of their election victory, the gig companies are hoping to campaign and lobby for similar laws in other states and countries. After years of seeing the ridesharing apps decimate taxi companies and significantly slash the ridership of public transit agencies, other workers are bracing to see if the “gig economy” will be able to overtake their own industry.

Capitalism’s declining rate of profit leads companies to cut labor costs, such as throwing workers into the gig economy wherever feasible—and beyond, considering that Uber’s and Lyft’s long-term plans are to automate cars and get rid of drivers altogether. Workers’ striving toward a new and different vision are the potential counterbalance. President-elect Joe Biden’s future appointees to the National Labor Relations Board could signal his own attitude on economic issues and possibilities for federal intervention. Regardless of that, driver Mekela Edwards is clear that worker activism won’t stop: “We went up against Goliath, and Goliath had $204 million, but I don’t think it’s wavered us as a collective. Our next step is to continue to fight for what we believe is right,” she told Salon.com.