With Fidel Castro’s passing in November came a wide range of commentary. The 1959 Cuban Revolution represented a great divide in Latin America, particularly in its relation with the behemoth to the north, the U.S. Against U.S. imperialism—from the 1823 Monroe Doctrine, through invasions and occupations of Central American countries, Mexico, Haiti, to counter-revolutionary actions against Bolivia and Guatemala in the 1950s—emerged the Cuban Revolution led by Castro, Che Guevara, and their small band of revolutionaries, and with the crucial support of thousands of Cubans in the countryside and cities.

MASSES AS REASON VS. ELITISM

The defeat of the Fulgencio Batista regime, the movement to abolish capitalism, and first steps to construct socialism were all welcomed by Cuba’s masses and viewed as a new beginning throughout Latin America. A genuine revolution that had taken power independently of the reformist Cuban Communist Party proclaimed a new moment. 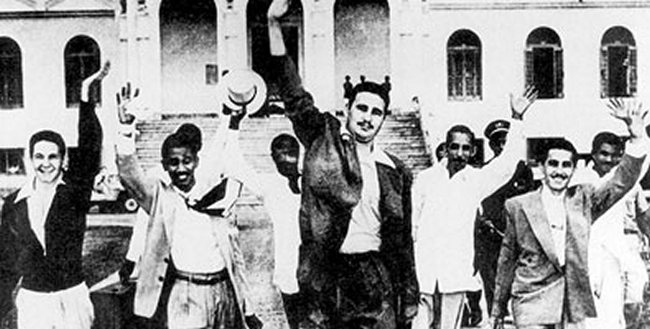 Young Fidel Castro and other rebels released from prison in 1955. Their attack on the Moncada Barracks in 1953 began the revolution.

The U.S. began its imperialist counter-attack, organizing a mercenary force that, fortunately, was soundly defeated at the Bay of Pigs in 1961. However, despite the Cuban Revolution’s full independence from orthodox Communism, that is, state-capitalism, and its efforts to ignite revolutionary movements in Latin America in the 1960s, Castro chose to align Cuba with Khrushchev’s Russia. This was a strategic maneuver in a Cold War world of super-power rivalry. But was it done as well because Castro found a state-capitalist ideology that matched his own elitist attitude towards the Cuban masses?

The logic of accepting this state-capitalist world led to the 1962 Cuban Missile Crisis. U.S. President John Kennedy and Soviet Premier Nikita Khrushchev, not Castro, let alone the Cuban masses, decided whether Cuba and perhaps the world would survive.

“What happens after the revolution?” became the great test. The U.S. spent decades keeping Cuba in isolation, seeking to overthrow the government by every means possible. Within Cuba, Castro worked to confine the Revolution within his narrow maximum-leader, single party (now united with the Communist Party) state. Any “deviation” from his line was characterized as aiding U.S. counter-revolution.

The people’s task was to defend the revolution, as Castro and company defined it, particularly by production and more production of sugar cane. At the same time there were advances in healthcare and education.

We cannot here follow all the subsequent developments: the debate on whether guerrilla focoism rather than mass social revolution was the pathway to social transformation; the tragedy of Che Guevara’s adventure in Bolivia; or, most crucially, the failure to elicit the creative energies of the Cuban people in constructing an authentic socialist path as against laboring in a single-party state-capitalist one.

Over a half century after the Cuban Revolution’s great divide, its original legacy still stands. But the grave contradictions in its aftermath leave a dual heritage that must be comprehended and overcome if we are to work out a truly emancipatory future for Latin America.

← From the Writings of Raya Dunayevskaya: Why Phenomenology? Why now?
Postal workers stop Staples →
This work is licensed under a Creative Commons Attribution-ShareAlike 4.0 International License