Nearly 3,000 died when Hurricane Maria devastated Puerto Rico in 2017. Ex-Governor Ricardo Rosselló “joked” in a text message, “Don’t we have some cadavers to feed our crows?”

When this and other texts became public in July, it sparked outrage and protest among Puerto Ricans fed up with government corruption. Mass demonstrations spread to include hundreds of thousands on July 22 in the capital, San Juan. The crowds rejected Rosselló’s contempt for humanity, his sexism, homophobia, and elitism. They refused to be intimidated by tear gas and rubber bullets.

Women were prominent in the movement. As Zoán Dávila-Roldán, a spokeswoman for Colectiva Feminista en Construcción, told The New York Times: “Women have been some of the main participants. Women from all kinds of occupations have taken to the streets. And I think it’s been because of that recognition of state violence, and how the state enacts violence on them.”

On July 24 Rosselló was forced to resign. 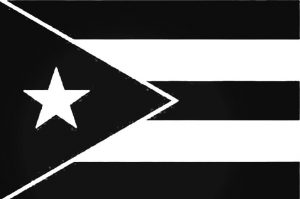 La Puerta, clandestine street artists in Puerto Rico, painted black
over a red, white and blue Puerto Rican flag on a building as an
“act of resistance” and it is now a wide symbol of defiance.

Rosselló’s texts hit so hard because they expressed the truth of what the ruling class thinks of the people they rule. All the indignities of 120 years of U.S. colonialism, economic exploitation, and racist violence—of government by and for the oppressor—stood naked.

In recent years Puerto Rico has experienced a series of vicious blows. In 2006, U.S. tax breaks for industry were allowed to expire, resulting in massive capital flight. The global economic crisis that began in 2008 made this even worse.

In 2016, the U.S. Congress placed Puerto Rico under the Financial Oversight and Management Board. This resulted in drastic cuts to public services, pensions, health care and schools. All this even before the hurricane hit.

Puerto Rican activists have made the point that the island has often been used as a testing ground for U.S. rulers, from the naval bombing runs over Vieques to the more recent tax breaks for corporations and individuals that were meant to attract new capital but have mostly attracted post office boxes and gated communities of the wealthy.

These social “experiments” have always been meant for the benefit of the colonialists, not the people.

AGAINST THE ‘SHOCK DOCTRINE’

So Rosselló’s insults were seen in literal terms of life and death. The ground for this, the indignation and inspiration, was Puerto Rico’s long history of resistance to colonialism and capitalist austerity. In her book The Battle for Paradise (2018), Naomi Klein described the many movements of resistance that fed into recent protests.

In fighting what Klein terms the “shock doctrine,” the imposition of anti-human economic policies in the wake of social disasters, Puerto Ricans “have been preparing for this moment for generations, from the height of the independence struggle to the successful battle to kick the U.S. Navy out of Vieques, to the anti-austerity and anti-debt coalition that peaked in the months before Maria.”

As Klein points out, the two worlds of the rulers and the ruled are starkly opposed in the struggle over what kind of society will emerge in Puerto Rico—a blank slate wiped clean by disaster and overwritten by the logic of capital, or a vision of a more human future created by the masses reaching for freedom and dignity.

← World in View: Sudan and Syria test revolutionaries
September-October 2019 issue of News & Letters is online →
This work is licensed under a Creative Commons Attribution-ShareAlike 4.0 International License