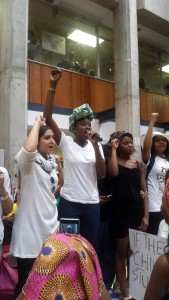 At the University of Witwatersrand in South Africa, student activists physically blocked registration for the new semester, noting that their demand that student fees must fall had not been granted by the government, and that a freeze on fees did not rule out future fee increases. Students are also protesting the outsourcing of campus jobs and are calling for the “decolonialization” of academic life, to make universities more inclusive to poor and working class students. The FeesMustFall movement is demanding the elimination of all registration fees so that poor students can also go to college.

On Feb. 1 students protesting University of Georgia’s policy to ban undocumented students were arrested after they refused to leave the administration building. Undocumented youth are banned from being students and denied in-state tuition, although students from neighboring states are given that special tuition privilege. The student occupation was also a reaction to a Georgia Supreme Court ruling that the University could not be sued by the students, citing the legal justification of “sovereign immunity” (citizens cannot sue state governments).

Although student protesters at the University of Missouri who have been in the vanguard of fighting campus racism have won significant victories, especially the resignation of racist university officials, on Feb. 4-5 they tried to have a dialogue with the university’s Board of Curators (Regents) and continued to demand that the university do more to eradicate racism. At the Curators meeting, Black students once again presented their demands, including more Black faculty members. The Curators and other university administrators said they were committed to act, but no specific new initiatives were announced.