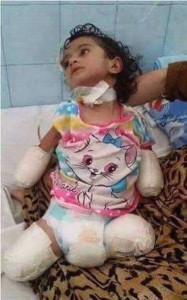 A Yemeni doctor speaks: ‘Share the pain I feel’

Taiz, Yemen–Pardon me, I know this story will make you so sad. But you have to share the pain I feel. The right leg of the little girl in the picture, Abrar, had been cut off by Houthis, a month ago. Since then she has cried because she couldn’t go to school. That wasn’t all. Now she is in the hospital because of shrapnel from a shell fired by the Houthis and Saleh’s militia in the Addahy neighborhood of Taiz.

Our hospital has many miserable stories besides Abrar’s. In the third bed, first room in the bone section there is a bus driver whose dream was to become a footballer. Now his leg is hanging without a joint. His ambition reminded me of Karlos Baka, a bus driver who became a skilled footballer. Unfortunately, Mohammed’s dream won’t come true. He became disabled instead.

On the fifth bed in the neurology section there is a mathematics teacher. He works in his grocery store part-time in the afternoon. The war damaged his store and a fragment from a shell fired by the Houthis and Saleh’s militia smashed his head.

Another man called Abu Arkan misses his little son and his second son, Arkan, had his leg cut off by a shell fragment. But that wasn’t enough for the Houthis. They took his bike too, which was his only source of income. He sold his refrigerator to get medicine for his sons. I couldn’t contact him for a long time. I was told he sold his phone to get medicine and food. I’m too sad and feel helpless.

We aren’t used to telling the truth. We usually say that we are good, whereas the fact is that we are getting killed. We tell the patients that they are good, in spite of the fact that we know that they have no real chance to live.

Even Freddie Quell, the survivor of World War II in the film The Master, in spite of the spiritual ruin and the trouble he lived through during the war, would feel a deep sorrow for our situation. He would offer us help. He would smuggle some ampoules that aren’t available in Taiz in his underwear.

Actually, I’m not able to bear this pain. Only the shroud seller will ignore this misery. Even Kafka, the best reader of the miserable details of daily life, would be exhausted by this horrific situation we are living. Gregor, a character in Kafka’s Metamorphosis, would feel compassion for us. And he would take part as a volunteer.

I’m frustrated. Is there anyone who can give me a glimmer of hope? Enough, enough. Pardon me. I’m not able to talk to anyone. I’ll stay and talk to myself.

The 14 people who worked with Doctors Without Boarders who were killed in Kunduz by U.S. bombs on Oct. 3.

“The bombs hit and then we heard the plane circle round. There was a pause, and then more bombs hit. This happened again and again. When I made it out from the office, the main hospital building was engulfed in flames. Those people that could had moved quickly to the building’s two bunkers to seek safety. But patients who were unable to escape burned to death as they lay in their beds.”

On Jan. 11 Saudi Arabia’s air force bombed a hospital in Yemen, killing five people and injuring ten. Doctors Without Borders said it was the third attack on one of its health facilities in Yemen in recent months.

“I don’t know how a pilot presses the button to bomb a hospital. It’s weird. How does he sleep? How does he eat? And then he comes back and bombs the people who are trying to help the victims. Wherever I went, there was bombing.”

Each action mentioned is a rancid war crime, but not an uncommon one. Doctors Without Borders’ hospitals are not the only hospitals attacked, yet their hospitals are sometimes the only ones in a region, which will, as a policy, treat any injured person, including combatants regardless of what side they are on. This is at odds with government policy in Syria, Egypt, Bahrain, etc., countries that brutally forbid medical staff from providing treatment to opposition fighters and/or protesters.

It was reported by NBC that according to cockpit recordings, the pilots involved in the Kunduz attack had second-guessed the legality of the strike. Eventually, they decided to follow orders, but in an alternate U.S. society where there is grassroots support for pilots resisting illegal actions the result might have been different. It is up to the people of the U.S. to construct such a society and to, in a variety of ways, start hitting the brakes on U.S. misconduct.

In the same way, the crimes of less powerful states such as Syria and Saudi Arabia could also be slowed or stopped. Supposing the U.S. military legitimately held the relative moral high ground, neither of these countries would want to act so brazenly as to provoke the U.S. to actually invade or to cut off military support. Yet, as long as the brazen acts in question mirror what the U.S. has already done in Afghanistan or elsewhere, the danger of receiving said consequences is significantly diminished. By denying criminal options to their own country’s military, the people of the U.S. would thereby lessen the range of options available to any other military.

In the case of a tyrannical regime, restricting the set of survival options available to the government might ripen the conditions wherein successful revolution is possible.

← Youth In Action: March-April 2016
Letter from Mexico: Meaning of Mexican workers’ struggles →
This work is licensed under a Creative Commons Attribution-ShareAlike 4.0 International License