On “Prime Day,” Oct. 11, Amazon warehouse workers in Moreno Valley, Calif., filed enough signatures to schedule a union vote at their facility. On the same day, dozens of non-union Amazon workers walked out of warehouses in Stone Mountain and Buford, Ga., to rally for $24 per hour. Though a warehouse may employ thousands of workers, dozens of pickets are significant, given the threat of retaliatory firings which, among many examples, had occurred only recently in nearby East Point, Ga. 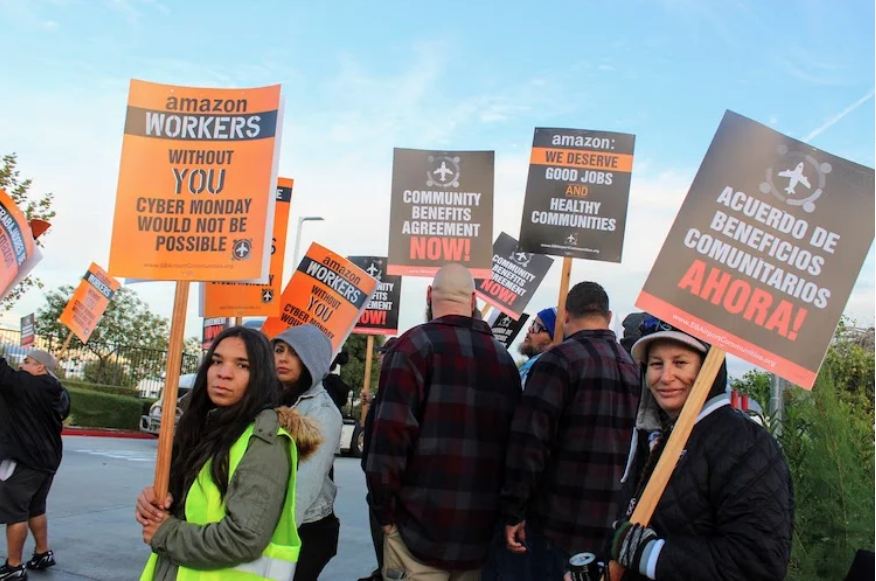 On Oct. 14, at Amazon’s air freight fulfillment center in San Bernardino, Calif., 23-year-old worker Anna Ortega joined a walkout. “With the rising cost of everything in our lives, it’s getting tough to make ends meet,” she told the Washington Post. “It doesn’t make any sense that people who work here should be on food stamps or struggling financially.” Participants in the walkout also called for better heat safety measures, as their region regularly gets hotter than 100 degrees.

On Oct, 18, Amazon prevailed in a union election in Schodack, N.Y. The company had buttered up workers with a single $1 raise, adding to millions of dollars already spent on mandatory staff meetings where the company mis-conveys the interests at stake.

Anti-union consultants in Schodack were paid $3,200 per day. A powerpoint slide, leaked to the Hudson Mohawk magazine, read: “An authorization card is a legal document shared with the government. The card becomes property of the union and they or third parties can contact you outside of working hours… and may show up at your home.”

Workers in Schodack vow to contest the result, just as in Bessemer, Ala., where the workers succeeded in getting a second vote that is still too close to call.

Meanwhile, Amazon continues to pursue objections to the April 1 union-yes result in Staten Island, N.Y. About 100 union workers there held a sit-down strike on Oct. 6 when smoke from an extinguished trash compactor fire was still present in the warehouse.

Sitting down to occupy the facility office, they asked to be sent home with one day’s pay, as happened with the prior shift of workers. At least 50 of the striking workers were suspended without pay over the incident.

Amazon CEO Andy Jassy’s compensation package amounts to 6,400 times the median pay of a worker! The worker, through her labor, created almost all the surplus value in this equation, and she would love to balance the seesaw for once.

← Votes that matter
From the Writings of Raya Dunayevskaya: Contradictions in Iranian Revolution →
This work is licensed under a Creative Commons Attribution-ShareAlike 4.0 International License