Introduction
I.    Discontent, revolt and reaction in the U.S.
II.   The worldwide war against women
III.  Chinese labor in revolt
IV.  Counter-revolution and revolution in the Middle East and North Africa
V.   Toward organizational new beginnings

…Continued from II. The worldwide war against women

Over the last two decades, as world capitalism has restructured to extend its life in the face of recurring crises, a central aspect has been making China the world’s workshop. As the key section of the world proletariat that capitalists confront, what happens to Chinese workers affects us all. They have demanded and gained some improvements in what were once below-subsistence working conditions.

Chinese workers have forced industrial wages up fourfold since 2000, their militancy not pausing even during the global Great Recession. Workers confronted more than their private factory owners funneling production to multinationals ranging from Hitachi to Honda to Wal-Mart, including the 1.4 million workers building Apple iPhones and computers for Foxconn. The state and Chinese Communist Party have employed the weapons at their disposal, from police and even army attacks on picketers, and the court system and incarceration. 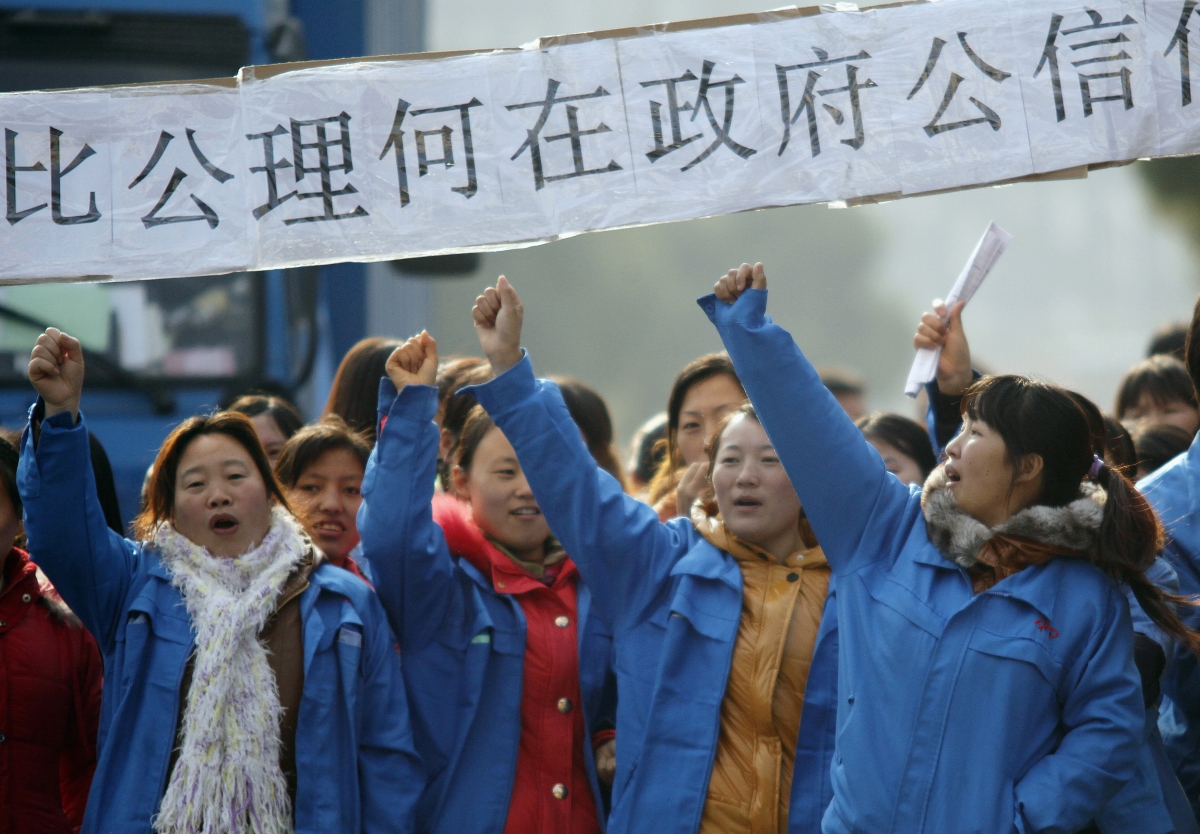 Workers on strike in December 2011 at a factory in Nanjing, China, owned by the South Korean conglomerate LG Group.

China’s rulers have continued to wage bloody war on any form of autonomous union that workers have tried to organize since the June 4, 1989, massacres of Tiananmen Square and Chengdu and before. However, in 2008 they finally allowed export production workers into a union—but only the official All-China Federation of Trade Unions, so that it is yet another authoritarian control on workers’ resistance.

Now China is attempting the greatest restructuring of its economy since it shuttered great swaths of the Mao Zedong-era state-capitalist steel plants, oil fields and other heavy industry two decades ago in the face of global capitalist competition. Leaders of veteran workers demonstrating for their jobs, or at least the severance pay and pensions they were promised, paid the price of long prison sentences.

Once again workers in energy and steel are in the crosshairs of the state planners, even as private employers undercut workers’ wage gains by moving production inland or out of the country. The current goal of state-capitalist rulers is to remove nearly two million workers from the coal and steel industry. The demand for energy as GDP increased 13% a year was so insatiable that the lives of 10,000 coal miners were sacrificed each year with a “Safety Last” policy. Now safety, with its associated costs, becomes one of the pretexts for closing mines. In reality the softening of production in China, the global slowdown and plummeting oil prices have dropped the price of coal by more than 60%, driving even U.S. coal giants to bankruptcy.

Strikes, job actions and demonstrations, never infrequent, doubled in 2014, then doubled again in 2015. Under Party Chairman Xi Jinping, repression has increased sharply. Independent labor observers and human rights lawyers have been dragged into the courts and given long sentences, while violent police and military attacks on workers’ demonstrations have increased. In both state and private enterprises, workers have again and again gone on strike over broken promises of benefits and severance pay.

Aggression outside China’s borders betrays the level of internal resistance. The government is building islands on reefs in the South China Sea to support troops and runways and assert dominance over Vietnam, the Philippines and other neighbors. This situation recalls the threats Cuba, Haiti, Grenada, the Dominican Republic and so many others have faced in the two centuries since the U.S. made the Caribbean an American lake under President Monroe.

Like gains made by the U.S. labor movement, Chinese labor’s gains are not permanent unless we complete a revolution that abolishes capitalism. The current wave of strikes is a beacon to workers in the West.

…Continued in Part IV. Counter-revolution and revolution in the Middle East and North Africa

← II. The worldwide war against women
V. Toward organizational new beginnings →
This work is licensed under a Creative Commons Attribution-ShareAlike 4.0 International License