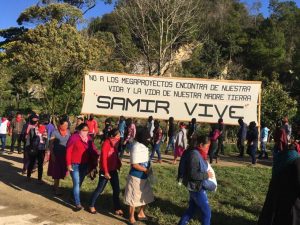 Amilcingo, Morelos, and Mexico City, Mexico—Samir Flores was an Indigenous activist, community member of the Congreso Nacional Indígena, and a leader of the protests against the Morales Thermoelectric Project. On the one-year anniversary of his murder, there were three days of commemoration of his life held in dozens of cities throughout Mexico called “Days in Defense of Territory and Mother Earth.”

From the ten Zapatista caracoles (regional organizations of autonomous communities) in Chiapas, to the streets of Mexico City, to the autonomous pueblo and home of Samir Flores, Amilcingo (where special masses and an all-day meeting of the National Indigenous Congress and their supporters were held)—thousands of original peoples of Mexico and supporting social activists celebrated his life. They demanded an end to the many megaprojects threatening the dozens of Indigenous communities and despoiling much of Mexico’s land, water and air. In Chiapas, the Zapatistas held commemorations in each of their government centers.

I participated in protests in Mexico City. (For a short very good video on the main Mexico City march, see: https://desinformemonos.org/marchan-indigenas-contra-megaproyectos-y-colocan-un-busto-de-samir-flores-en-el-zocalo-capitalino/). There were also a number of protests the day before that blocked main streets in various parts of the city.

The next day I traveled with hundreds of others to Amilcingo where we joined the National Indigenous Congress in having a discussion of the three days of activities and proposing possible resistance actions to come. It was important to hear about the protests that various communities, groups and collectives organized, and a few possible future activities—against the Mayan train, the transoceanic corridor and a number of mining projects.

But what was missing in assessing the three days of “Defense of Territories and Mother Earth” was a discussion of the need to develop emancipatory ideas—theory, a freedom vision—to go along with the needed actions.

It seemed that only action, action, action (practice) was all that was on the agenda. But practice without theory as well as theory without practice is a recipe for incomplete and even failed change. We in Praxis en América Latina raised the question of dialectics, particularly Marx’s dialectics, and his concept of the need for revolution in permanence.