The revolutionary nature of the Women’s March on Washington that ended up being a worldwide march of women (see “Women take the lead against world retrogression,” March-April 2017 N&L) could be seen as well in what happened on March 8, International Women’s Day (IWD).

What else was revealed was a lot of fools like The New York Times, which on March 8 printed, “[T]he protests [on IWD] were far smaller than the masses who turned the women’s marches on Jan. 21 into a phenomenon, keeping the question open of whether protesters’ fervor can be channeled into a sustained movement with demonstrable political results.”

Oh, “the protests were far smaller” than the most massive march in history! How could that happen? And did they measure the women who wore red, didn’t shop that day, called in sick, or went to work but didn’t do any?

And who thinks it’s a good thing for “protesters’ fervor” to be “channeled into a sustained movement with demonstrable political results,” when by “political results” they mean the Democratic Party? Perhaps the beauty of the day—and not only in the U.S.—is the refusal of women to be “channeled” into some pre-existing limited direction.

While many have wrongly attributed the idea of the strike to the planners of the Jan. 21 Women’s March on Washington, the real origin tells a more revolutionary story.

In 2016 women in Argentina held a National Women’s Meeting (NWM) of 70,000 women on Oct. 8-10. The NWM, gathering yearly since 1985, is independent of all states, “self-organized, horizontal, self-financed, diverse and deeply democratic.” The day after a 16-year-old Argentinian, Lucia Pérez, was stabbed to death, women associated with the National Women’s Meeting called for a Women’s Strike on Oct. 19, 2016. 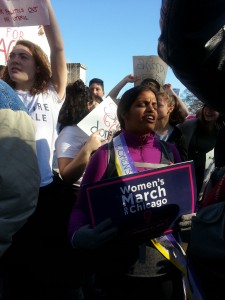 In the same month, tens of thousands of women in Poland took to the streets in over 60 Polish cities and engaged in a general strike (see “Polish women show path forward,” Nov.-Dec. 2016 N&L). They were saying “No!” to the Polish parliament’s plans to worsen an already draconian anti-abortion law that would allow legal abortions only if the woman’s life was “directly threatened.” Polish leaders were so traumatized by the women’s militancy that they abandoned the law.

Argentina already had a powerful group fighting violence against women: “#NiUnaMenos” (Not One Less) meaning not one more woman lost to violence. They had formed a network with several other Latin American countries and reached out to Poland or Poland reached out to them. It was after that October 19 women’s strike that the call went out for an International Women’s Strike for IWD 2017. It is that call that the U.S. organizers for the Women’s March on Washington brought to U.S. soil.

A ‘NEW GEOGRAPHY’ OF FEMINISM

The Ni Una Menos Collective wrote that the strike “complicated the category of women workers and made it clear that work is also domestic and informal and includes forms of self-managed association.” They continued, “A new geography was drawn going from Ciudad Juárez to Moscow, from Guayaquil to Warsaw and Sao Paolo, from Rome to San Salvador de Jujuy. The local and global fabric produced a new type of internationalism that was seen in the networks and the streets—[a] new practice of feminist internationalism.”

They write of Jan. 21: “The women’s March in the U.S.…is part of this cycle that demonstrates a new form of feminism: the overlapping movements of women, trans people, and migrants refuse to remain subjected to the empire of new forms of capitalist exploitation.” (“How Was the March 8 International Women’s Strike Woven Together?” by Ni Una Menos Collective, Viewpointmag.com, Feb. 16, 2017.)

What we are seeing with this huge mass of women stepping forward and taking the lead in the fight against world retrogression, is a movement that has developed anew, not by leaving anything behind, but with the meaning they have acquired from over a half century of struggle.

← Left’s blame game
World In View: The crisis of Turkish democracy →
This work is licensed under a Creative Commons Attribution-ShareAlike 4.0 International License