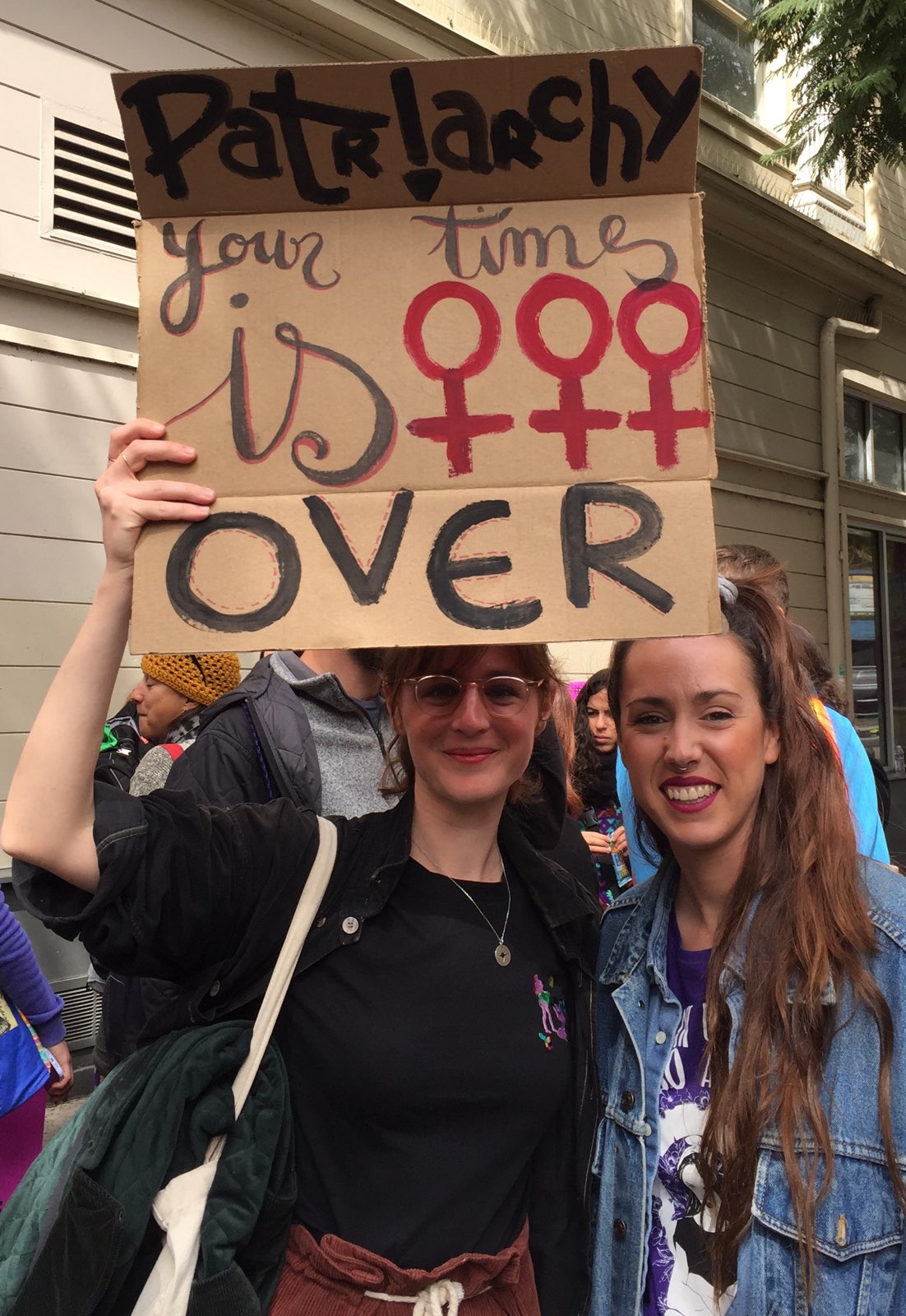 What was new this International Women’s Day (IWD) was the larger size of the marches, the greater militancy of the women participants, the new places where they took place, and the attacks against them which escalated significantly from previous years.

Iraq was one of those places, where this year several hundred women carrying roses and holding purple banners demanded their rights in a celebration in Tahrir Square in Baghdad. The demonstration was a follow-up to what they did on Feb. 14, when hundreds rallied demanding freedom for women. (See “Women’s movements reach for new global stage,” March-April 2020 News & Letters.) Iraqi women also launched Women of Ninevah magazine, to create a forum for women in this ethnically and religiously diverse area.[1]

Other new places that saw IWD demonstrations were in the Kurdish-run province of Hasakeh where Syrian women rallied for their freedom. Turkey too saw a most creative demonstration in Pazarkule, where migrant women at the Turkish/Greek border made use of IWD to demand that the borders be opened.

As it did three years ago, Pakistan’s IWD march, the Aurat (women’s) March was massive in Islamabad and other cities with signs that took up issues from violence against women to demanding men do their share of housework—including picking up after themselves and making their own meals.[2] Their slogan this year was “My body, my choice.” While the backlash last year was brutal and included physical attacks and rape and death threats, this year the right wing and religious fanatics didn’t wait until the march in Islamabad was over but attacked it with stones and clubs, and anything else they could find to hurl at the mostly women and children marchers. Several such groups linked with the Red Mosque brigade and joined up with a Taliban-allied religious party to demonstrate across the street from the Aurat March. The police had to stop them from attacking the women marchers.

The IWD march in Santiago, Chile, was also massive. Two million marched while another 40,000 demonstrated in other cities. They were demanding abortion rights and an end of violence against women. The cops were there to attack the women, who were also demonstrating against the police violence that had taken place against the protests that began in October. Over 1,600 cops were put on the streets to control—read harass—the marchers.[3] [4]

In Bishkek, the capital of Kyrgyzstan, women were attacked by masked men who hit them and tried to destroy their signs. The police, instead of arresting the thugs, went after the women and children, cramming them into a police bus.[5] Even women in France were attacked by the police, who pushed and punched them, threw them to the ground and against walls, and dragged them off by their hair.

Every year since Recep Tayyip Erdoğan has been the President of Turkey, the IWD demonstrations have been attacked, outlawed, or both. As well as the migrants’ demonstration at the border, the IWD march was, again, outlawed and attacked. As they have done before, women defied the ban and marched anyway. The authorities closed the roads leading to Taksim Square and teargassed the marchers. The police blocked hundreds of women in Istanbul from entering the Square when they did manage to get close by taking side streets. A thousand women were able to rally in Istiklal Square. The banners they carried demanded an end to femicide and domestic violence and justice for the victims.[6]

Women were also prohibited from marching on IWD in Petersburg, Russia, but did so anyway, beating on drums and carrying signs including: “My body is my business,” “On March 8 I think about women political prisoners, not spring.” They performed the Chilean song/dance “The Rapist in Your Path,” which spread around the world in the last few months.[7]

WHAT IWD MEXICO TELLS THE WORLD 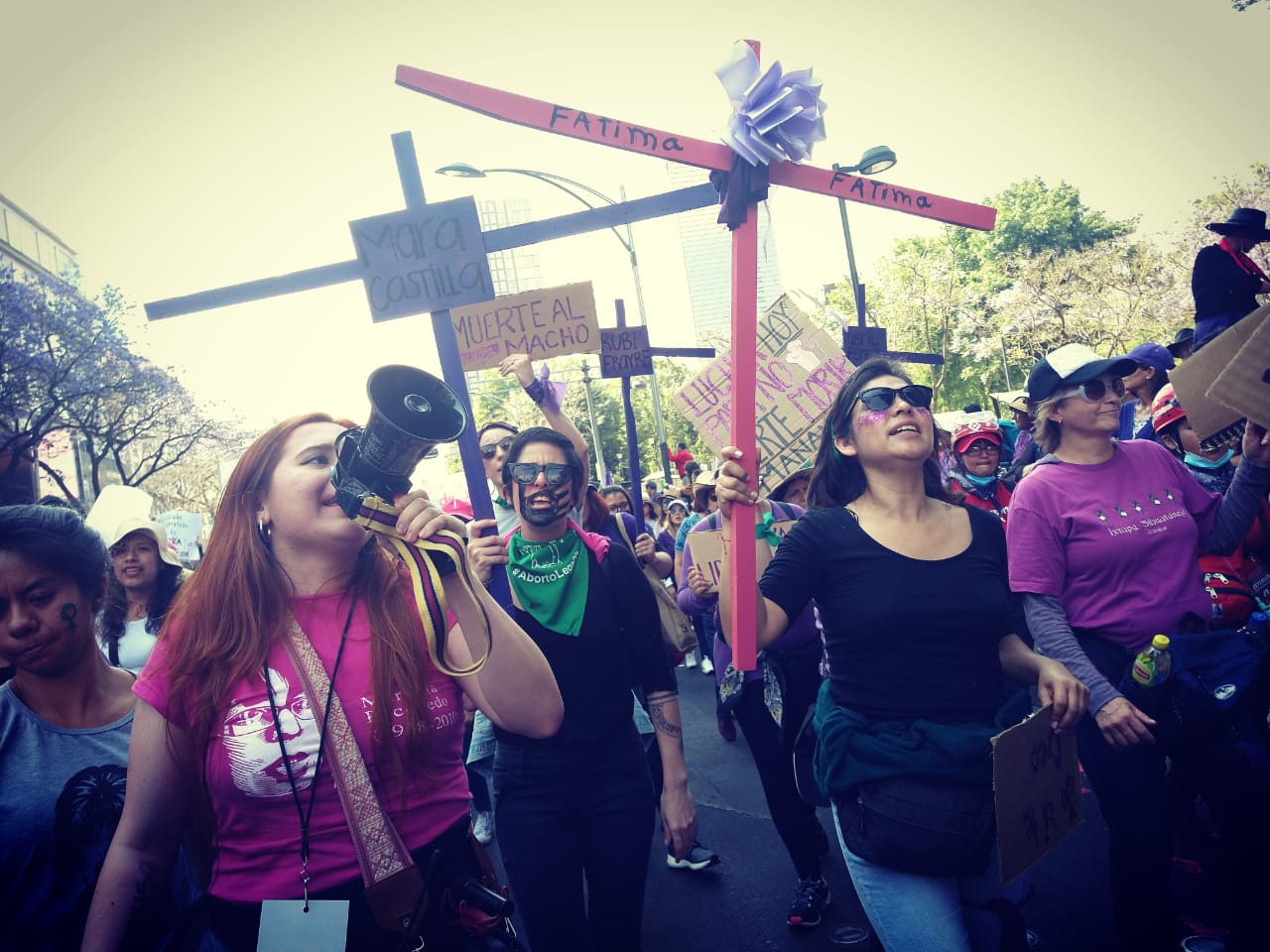 Women in Latin America have taken the lead in the struggle for women’s rights. In Mexico City over 90,000 marched on IWD, flooding Mexico’s biggest square. They were peaceful and also militant. They sang, gave talks, performed “A Rapist in Your Path,” wrote over 3,000 names of murdered and disappeared women on the Square, painted statues with messages and sprayed statues with pink and purple paint; cars were overturned, windows smashed, and women busted through police barricades that attempted to hem in the march. Women marched in Ciudad Juárez, and in Guadalajara, where they dyed the water in public fountains blood-red, and wrote the names of murdered women on the sidewalks.[8] The Mexico City march was attacked too, this time by neo-Nazi anti-abortion fanatics making Nazi salutes.

Just as on IWD the streets of Mexico were filled with women, on Monday, March 9, women disappeared, making #UnDíaSinNosotras—“A Day Without Us”—highly successful. Streets and buses were half empty, businesses shut down, schools closed. “Women at the foreign ministry left statements on notes on their empty seats. ‘By the end of the day, ten women will have been murdered. Stop killing us,’ read one.” Women were also protesting their president.

Despite what is clearly a crisis, Andrés Manuel López Obrador (AMLO), has slashed funds for women’s shelters as well as daycare and declared on the day of the strike that he would take no new approaches, promising only “to reinforce the same strategy of looking at the causes of violence.” This “same strategy” is the one that has been in place while the murders of women have skyrocketed. At the same time that he refused to do anything about the carnage, he blamed “conservatives” for “putting on the mask of feminism and saying, ‘we’re going to get rid of the government.’”[9] His refusal to either acknowledge the problem or do anything about it has created a self-fulfilling prophecy because the many women who voted him into office because they were hoping for a more liberal, less corrupt government, now despise him.

WHERE DO WE GO FROM HERE?

Why all this hostility against women’s actions on IWD? Some of the reason is that women are purposefully marching against their country’s leaders. This was true in Chile, Turkey, Brazil, Colombia, the U.S., Russia, and other countries including Sudan, where women rallied in Khartoum at the Justice Ministry protesting how women’s issues have been ignored even though women are leaders in the revolution.

It is also because it is clear that for the demands of women to be met, a revolution is necessary. Women are demanding not only a change in leadership—Mexico’s president and others have shown how little difference that can make. What we want is a change in human relationships. Women are, without using the expression, demanding a revolution in permanence.

Women on IWD 2020 did not call for revolution in permanence or for revolution to be total from the start, but their implicit demand is for totally new human relations. As we wrote in the last paragraph of “Women’s movements reach for new global stage” (March-April 2020 News & Letters): “What is implicit in all these struggles women and others are waging against violence, for control of our own bodies, against racism and class oppression, homophobia and discrimination against the disabled is the yearning for a world where everyone can develop all their potential and live free. It is no abstraction to say that women are fighting for that kind of world. It needs to become our explicit goal.”

[2] “Pakistan’s Women Marched for Their Rights. Then the Backlash Came,” by Tehreem Azeem, The Diplomat, March 20, 2019.