Mexico City—On July 31 I participated with a group of around 50 bikers in a protest against the construction of a bridge that would destroy the wetland of Xochimilco, one of the few natural zones remaining in the city. At the demonstration, we joined the locals and others and for nearly two hours occupied the avenue where the bridge is being built. A few drivers yelled at us for stopping traffic, but several others honked their horns and made signs of support.

DEVELOPMENT VS. NATURE AND HUMAN HEALTH 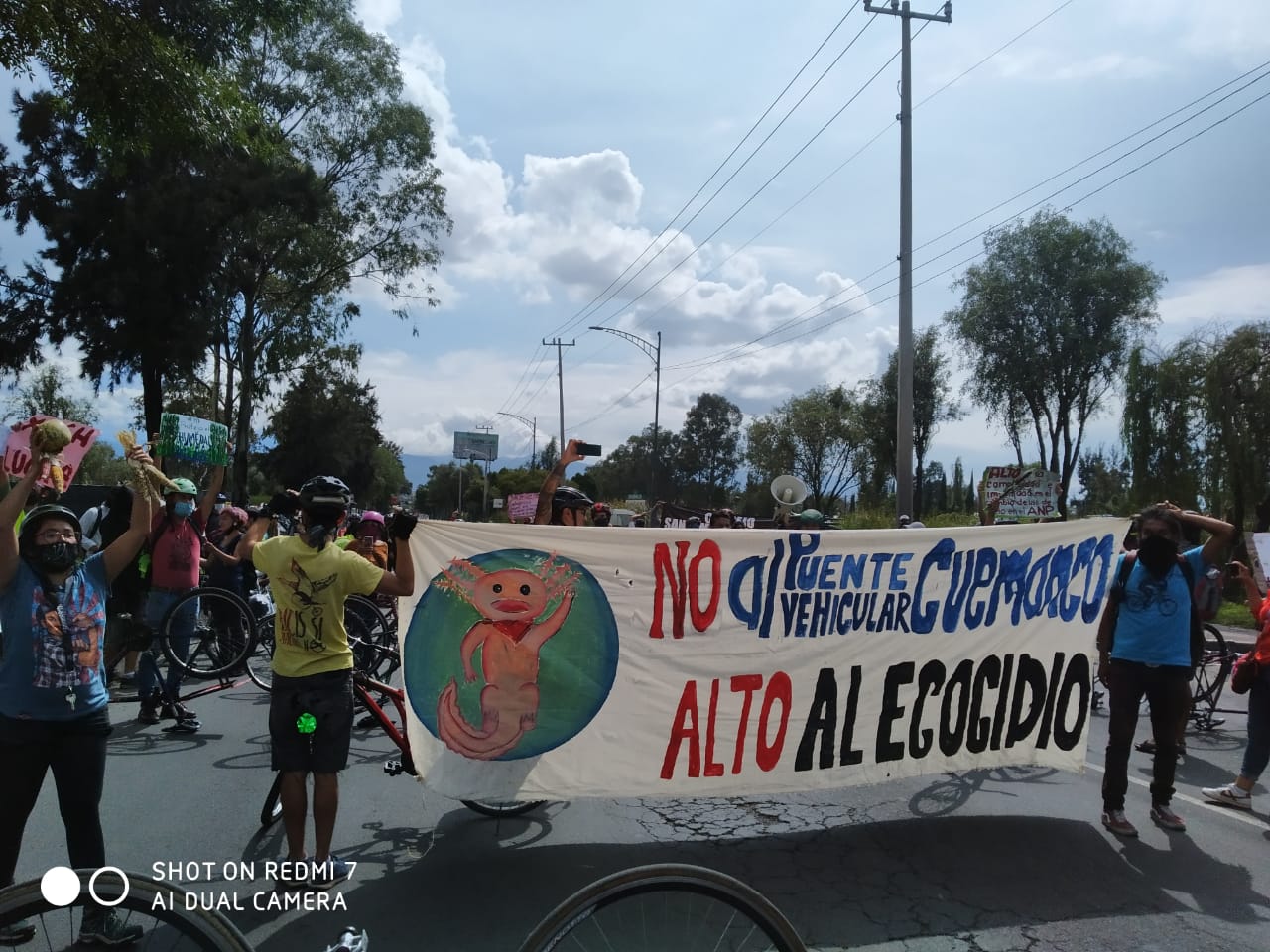 Demonstration on July 31, 2020,  protesting the construction of a bridge in Xochimilco. Photo: Ángeles for News & Letters.

The bridge was announced last year by Mexico City’s mayor, along with many other “development” projects, and is supposed to help solve the enormous traffic problems in the city. The locals from Xochimilco, several of them small farmers and merchants, realized the negative consequences this would bring to their own activity and to the environment, and organized as Coordinación de Pueblos, Barrios Originarios y Colonias de Xochimilco (Coordination of Peoples, Native Barrios and Neighborhoods of Xochimilco), They began a legal action against the bridge. Although a judge responded to it favorably, he then let the project continue because it supposedly meets all the environmental, social and safety requirements. Since then, the protests have intensified, both online and in person. The biking action on July 31 was the second one in the last three weeks. A third one can be expected soon.

By the end of our demonstration, a representative from the city government came to the site and offered a dialogue on Monday morning to “arrive at a solution.” The locals from the Coordinación responded fiercely that there is nothing to negotiate, that their only demand is that the bridge construction is cancelled, and that they will talk to no one but the city mayor herself, who happily attends public ceremonies on weekends but lets this situation wait until a “workday.” “See our good intention to negotiate,” said the functionary, “We didn’t send in the police.” They were immediately booed by all of us. Around 7:00 PM, with the cool breeze and the soft light of the early evening refreshing our faces, we began our ride back home.

This was a most exciting and effective activity as it really caught the attention of the government and a couple media corporations. It also might have raised some consciousness among drivers of the big pollution issues in the city and the use of bikes as an alternative mean of transportation. However, one can’t help but ask: What comes next? Will the legal action against the bridge, together with mass protest, be enough to stop it? Will the government respect its own rules? How many more actions will be needed to achieve the goal? What will happen with all the other projects that are being realized throughout the city, the whole country, as part of the “developmentalist” policy of Andrés Manuel López Obrador’s federal administration?

Developmentalism is the law of motion of capitalism. It is constantly looking for new areas of investment where, through the exploitation of labor, it can accumulate more and more profits. It doesn’t matter whether these areas are natural reserves or belong to small farmers. Capitalism sees nothing but accumulation. This is what is destroying the Earth and, consequently, our own physical and mental resistance to diseases. Only a theoretical/practical united view against capitalism can help us fight this problem from its roots. How to build this with the broadest participation of all the subjects: Native peoples, workers, students, etc.—those who don’t want to keep on living in this rotten system and are aiming for a different kind of life—maybe still undetermined, but definitely human, whole and free?

← Soledad’s Black prisoners brutalized in 3 a.m. raid report guards warned, ‘You N—ers will have COVID-19!’
Editorial: Yemen: A voice that must be heard →
This work is licensed under a Creative Commons Attribution-ShareAlike 4.0 International License