It was no surprise that Brett Kavanaugh’s bid for a lifetime appointment to the Supreme Court of the U.S. was pushed through Congress at record speed, given the moral bankruptcy of President Donald Trump and Congress. The surprise was the vibrancy, strength and determination of the fight against that nomination and against what Kavanaugh’s Supreme Court membership means for a Court already far to the right of the majority of the country, and opposed to such widely held principles as a woman’s right to control her own body—a court that is hardly the check on the presidency and the legislature that the framers of the Constitution had meant it to be. 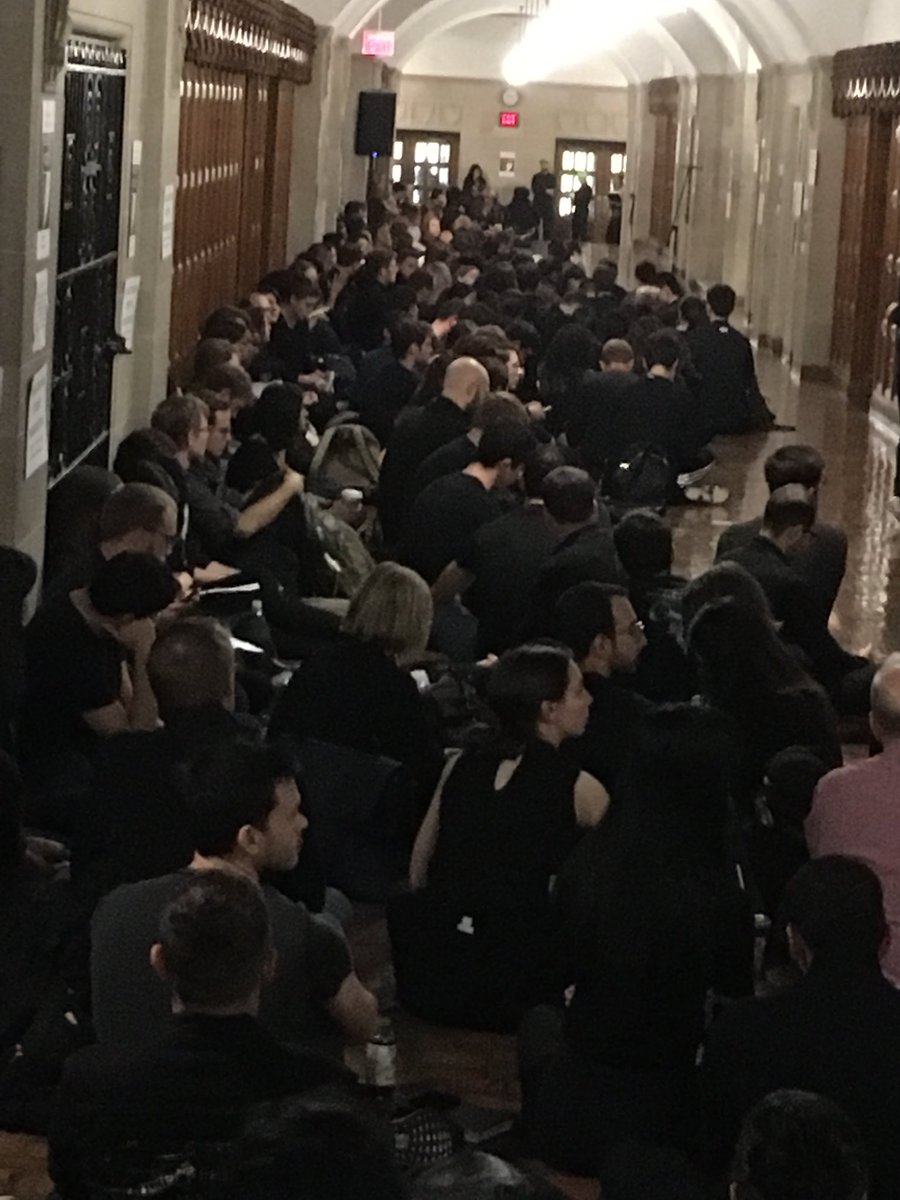 Yale Law School students fill a hallway in silent protest against Brett Kavanaugh’s nomination on Oct. 24, 2018. Photo: Kent Pierce. For URL of the picture, click on it.

What Dr. Christine Blasey Ford’s testimony did was miraculous. She not only made it possible to delay Kavanaugh’s nomination for several weeks, slowing down the juggernaut of Republican glee for their right-wing ideologue nominee; she—and Kavanaugh’s own disgraceful testimony—revealed him as an hysterical, bald-faced, entitled-white-boy liar. Furthermore, Blasey Ford reinforced the #MeToo movement and made clear to the world the lifelong ramifications of sexual violence experienced in adolescence. That Trump’s base was incapable of recognizing who was doing violence to whom only makes clear both the terrible grip that rape culture has on many in the U.S. who contrive to see the victim as Kavanaugh, and Trump’s cruelty, sadism, and misogyny.

That Senator Susan Collins voted with the Republicans after a disgusting 44-minute speech of hollow justifications was no surprise either. She has voted with them—with Trump—79% of the time. Her vote as well as the support Kavanaugh and Trump received from many white women make clear that electing women to office has never been the way to move society forward. Yet Collins’s betrayal is, nonetheless, painful because we hoped that even Republican women would actually care about rape, harassment, abuse, poverty, racism, or children’s well being.

Women who were not Republicans and others were determined to stop the tragedy of Kavanaugh’s nomination. Among the thousands who came, over 300 were arrested at the Capitol as they confronted Congressmen and sat in at their offices in unprecedented demonstrations there and in front of the Supreme Court building. Thousands filled the atrium of the Hart Senate office building, and more jammed the halls while chanting “Justice NOW!” and “Our court!” Women had also mounted large demonstrations in cities throughout the U.S. Many of us knew we would fail but were determined to mount a resistance so great that history would be forced to record the fact that “the people”—two words politicians love to spew—opposed Trump’s drive to place the demands of capitalism above democracy and people’s very lives.

Blasey Ford testifying, demanding an investigation, was an inspiration, but she was never alone. Nor were women alone in being horrified about what Kavanaugh’s appointment means for their rights. The decades-long drive by Republicans to drive the Supreme Court back to the reactionary character it has held for most of its history and to gut it of any vestige of objectivity has come to full fruition. The basic human rights that women, LGBTQI people, people with disabilities, Black people and other people of color, immigrants and most certainly workers, have fought and died for—for decades—can now be destroyed with the bang of a gavel. Everyone recognized that Trump, Kavanaugh and the rest of the Republican Party are waging a struggle for total single-party power. That is why morality, integrity, due process and democracy were all transformed into Orwellian lying words. At the same time, the struggle cannot be reduced to Republicans vs. Democrats, rather than rulers vs. masses.

Why was this fight so fierce? Karl Marx tells us that: “Freedom is so much the essence of man that even its opponents realize it….No man fights freedom; he fights at most the freedom of others.” This fight against Kavanaugh, although it appears as a fight against a nomination, is, in actuality, a fight for something—for freedom. Michelle Alexander, author of The New Jim Crow, caught this in her opinion piece in The New York Times (“We Are Not the Resistance,” Sept. 21, 2018) when she wrote: “Those of us who are committed to the radical evolution of American democracy are not merely resisting an unwanted reality. To the contrary, the struggle for human freedom and dignity extends back centuries and is likely to continue for generations to come.” She wrote of today’s movements for freedom as “The revolutionary river that brought us this far [and] just might be the only thing that could possibly carry us to a place where we all belong….American history can be described as a struggle between those who truly embraced the revolutionary idea of freedom, equality and justice for all and those who resisted.”

It is vital to name this struggle as a struggle for freedom because what we are fighting against is a march towards fascism that in its fury to destroy “the freedom of others” has the potential for worldwide catastrophe as well as the destruction of the very earth we live on. No one can allow themselves to be so distraught over Kavanaugh’s winning of a Supreme Court seat that they give up. Rather, we must make explicit that our fight is a fight for freedom, for new human relationships, for a human world; and to bring that about we will need a humanist revolution.

–Terry Moon
For the Resident Editorial Board of News and Letters Committees
October 10, 2018

← Anti-Kavanaugh protesters slandered
Solidarity with Trans people under attack by Trumpism →
This work is licensed under a Creative Commons Attribution-ShareAlike 4.0 International License