Marxist-Humanists have lost a giant with the death of Andy Phillips (Andy Sufritz), 1924-2018, on April 3. Andy was a founding member of News and Letters Committees in 1955, which he helped to establish on firm foundations after spending years in the Johnson-Forest Tendency both in the Socialist Workers Party and as the independent organization Correspondence.

Andy was among the war veterans mustered out of the military, radicalized by their experiences in World War II. Veterans in particular swelled the ranks of the Johnson-Forest Tendency, which identified self-described Communist Russia not as revolutionary but as state-capitalist and capable of allying with Nazi Germany to make the carnage of that war possible. 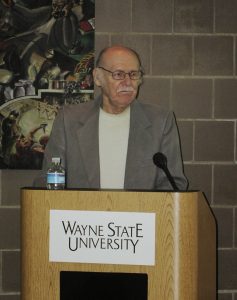 Andy Phillips in 2010 at the centenary in Detroit for Raya Dunayevskaya. Photo: Terry Moon for News & Letters

Andy was a student at West Virginia University on the GI Bill when he left college in 1948 to begin a 10-year stint as a coal miner. By the time coal miners went out on strike in 1949, under the threat of the introduction of the continuous miner—automation that would devastate the jobs of coal miners—Andy had been injured in an underground explosion, and was on the spot as a strike participant and leader in a region where the militancy was greatest.

The miners faced not only mine operators, but also the federal government and even the leadership of the United Mine Workers (UMWA). Miners previously trusted UMWA president John L. Lewis, but in this strike they defied his repeated orders to return to work without a contract. With the aid of food caravans from Detroit, organized by Andy’s comrades, the miners outlasted the operators.

The excuse Lewis used in ordering the miners back to work was to try to avoid the federal government invoking the draconian provisions of the Taft-Hartley Law against the union. But Lewis’ acceptance of automation, as long as the operators contributed to the UMWA Health and Welfare Fund for each ton of coal extracted, helped destroy two-thirds of the miners’ jobs in 10 years. Andy pointed out that any miner unemployed for a year was no longer entitled to medical or pension benefits from the UMWA Health and Welfare Fund.

In 1984 Andy recalled those historic events as he co-wrote with Raya Dunayevskaya The Coal Miners’ General Strike of 1949-50 and the Birth of Marxist-Humanism in the U.S., a pamphlet that attests to how pivotal that strike was for labor and for News and Letters Committees. 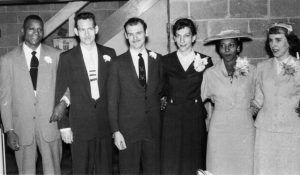 Andy and Olga (center) at their wedding in West Virginia as other coal miners and their wives stand up with them.

Andy along with his wife and comrade Olga Domanski maintained the vibrant West Virginia Local which was at the heart of U.S. labor struggles. After they moved to Detroit, Andy was the Managing Editor of News & Letters for many years. His writings focused on the state of U.S. labor—he frequently traveled to Appalachia to make sure that the voices of insurgent miners were heard within News & Letters. He was a mentor to the new generation of revolutionaries that emerged out of the Civil Rights Movement and the Anti-Vietnam War Movement.

His international trips included a visit to Poland in 1981 for a dialogue on Marxist-Humanism with factory workers and activists forging new forms of organization against their state-capitalist rulers backed by the threat of Russian intervention. After the Center of News and Letters Committees moved from Detroit to Chicago in 1984, Andy maintained the organization’s roots in Detroit by reporting from the vantage point of his experience with auto workers and coal miners.

Even as he grew frailer and moved into assisted living, Andy continued as a thoroughgoing Marxist-Humanist. He found people on the staff interested in learning of his days in the mines. He created one-on-one study groups on the works of Dunayevskaya and the philosophy of Hegel—going full circle from when he had first become a revolutionary in the 1940s and participated in discussions on the emancipatory aspects of Hegel for Marx and Lenin.

Andy was with us at an expanded Resident Editorial Board meeting in March as we began discussions of the Draft Perspectives for the 2018 Convention. The philosophy of Marxist-Humanism and the organization that has taken responsibility for that philosophy, News and Letters Committees, constituted Andy’s life work. We honor him by continuing that work, knowing so well that the world is greatly diminished by his death.

← Only revolt grows in Iran’s deserts
Draft for Marxist-Humanist Perspectives, 2018-2019: Fighting Trump and his fascist allies in practice and theory →
This work is licensed under a Creative Commons Attribution-ShareAlike 4.0 International License