Olga Domanski is greatly missed. Although the word “revolution” has recently returned to the mainstream of U.S. political discourse (it has never been absent from the lexicon of the advertising industry), the reality is that the number of people who truly understand what a revolution entails, let alone desire one, is so small that if you have met one or two in your life you are fortunate. Olga was one of those people.

Among the things that I will miss are the personal details, like her love of music, and the wealth of casual anecdotes from her life as part of an American Left that has all but disappeared. A Philadelphia native, her father was a stamp collector of such renown among aficionados that he received mail addressed simply with his name followed by the word, “Philatelist.”

I don’t know what radicalized her, but Olga joined the Workers Party, a small socialist group, at the start of World War II, only to discover that she had become a member of a small but lively political minority, the state-capitalist tendency, within the larger group. 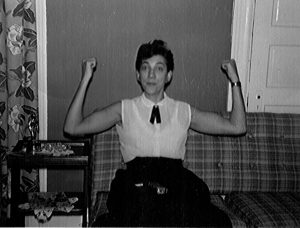 She and her comrades strove to carry their message to the wartime working class, standing at factory gates and knocking on doors on what they called “Red Sundays” to distribute the group’s newspaper.

It was a hard life. She, like many of the radicals of the period, voluntarily “colonized” herself in an industrial job, at one point working in the historic Fisher Body assembly plant in Detroit.

She vividly detailed this experience in a document titled, “Pages From a Shop Diary.” (See “Olga Domanski: Embodiment of Woman as Reason,” Jan.-Feb. N&L.) She also lived and worked in a West Virginia coal-mining town during an important wave of post-war wildcat strikes against mine operators and the United Mine Workers leadership.

Sharp factional battles accompanied these efforts. Life was certainly made no easier as she and her co-thinkers set out on their own independent course in 1955, only one year after Joseph McCarthy was censured by the U.S. Senate. She put in decades of grinding labor to produce and distribute N&L, managing much of the organization’s affairs in addition to producing a long record of journalistic and theoretical work (see p. 5 for one example).

The ranks of the organization were never large, but Olga took encouragement from events that seemed to confirm the group’s perspectives, like the massive June 1963 Civil Rights March in downtown Detroit that she would often recall. The rapid emergence of entirely new and powerful movements, particularly the Women’s Liberation Movement, inspired and sustained her.

Olga was no stranger to periods of serious reaction and defeat. Her tireless and cheerful presence is sorely missed in today’s world, threatened as it is by so many dire challenges to human dignity and well-being.

← Women WorldWide: March-April 2016
Olga Domanski: Part of ‘a generation of revolutionaries’ →
This work is licensed under a Creative Commons Attribution-ShareAlike 4.0 International License