For a women’s liberationist, meeting a revolutionary organization in 1969 that was founded by a woman was a wonderful stroke of luck. But it wasn’t alone Raya Dunayevskaya who was so fascinating to a young feminist, it was that News and Letters Committees was full of riveting women, including Black and working-class women, and was a place to learn what women who were not white and middle-class, were thinking and doing.

Olga Domanski was someone to learn from—be that about her years as a worker at the GM plant in Flint, or about understanding organization and Marxist-Humanist philosophy. For several years I lived three blocks from her and looked forward to the times she invited me to dinner. Going to parks in Michigan with her is one of my favorite memories. She picked weeds and flowers and, seemingly without effort, made them grace her home.

WHAT IT MEANS TO BE ORGANIZATIONAL 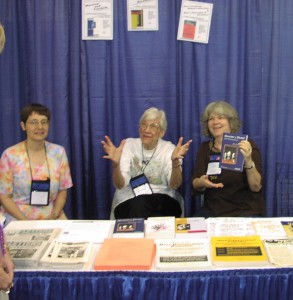 But the reason that Olga will be in my head forever is because of what she taught about what it meant to be organizational, what Marxist-Humanism is.

It isn’t only that Olga did the nuts and bolts work of organization, from all kinds of correspondence with authors, publishers, activists, to running the office; it was her attitude to such work. That kind of work—you know, office work, the work that women do that is undervalued and underpaid—was not belittled by her. She saw it as work that required thinking tasks through, doing them well, and being creative. Not because the work was fascinating, but because it kept your organization going.

The new Women’s Liberation Movement took the Left by surprise, but in a short time, Olga got it. In her 1970 article in Notes on Women’s Liberation: We Speak in Many Voices, “Pages from a shop Diary,” Olga wrote passionately,

OLGA WROTE ON WORKING WOMEN OR ON HEGEL WITH PASSION

“Most of the women were married and had children. They had two work days—first at the shop, and then at home. And they resented their relations to the men at both places.

“The department [where the women worked], to begin with, was situated like a harem. The women were not scattered among men, doing jobs side by side with the men. They were isolated in one corner of the shop, in one department. They were treated as ‘creatures apart’—something very special—but special in a very negative way.”

That passion that was so much a part of her is seen in most of her writings—some of which we will be printing in this and future issues—and it is especially noticeable in what she wrote about the war in Bosnia-Herzegovina. You can see it in this paragraph from “Clinton capitulates to ‘ethnic cleansing’” from May 1993 and published in Bosnia-Herzegovina: Achilles Heel of Western ‘Civilization’:

“But what can explain the disgraceful position of much of the Left, which has dared to present the events in Bosnia as if they were no more than some

‘battles over land among warring gangs of Serb, Croat, and Muslim forces’ (as one Trotskyist journal would have it), all equally responsible for the suffering going on? Or worse, the Left which has dared to accuse women’s liberationists who have cried out against the mass rapes of ‘giving a feminist cover’ (as another put it) for an imperialist intervention in Bosnia! Nothing more reveals the total bankruptcy of such a Left in the face to today’s changed world. The truth is that if it were not for the Women’s Liberation Movement, there would have been scarcely any response to the events in Yugoslavia anywhere in the world.”

Olga will be terribly missed. When a comrade like Olga dies, it leaves a huge hole in the world. She was a unique, original thinker, activist and friend, and there will never be another like her. We can honor her by continuing this organization, and developing the philosophy of Marxist-Humanism that she lived her life for.