In a terrible reversal, Delaware’s school personnel must now out Transgender students to their parents before school personnel can acknowledge their gender identity or help them obtain their rights, such as school property being a safe space and access to locker rooms that match their gender. This is in a blue state with a Democratic governor and secretary of education, who are pushing some of the most antiTransgender legislation in the U.S. 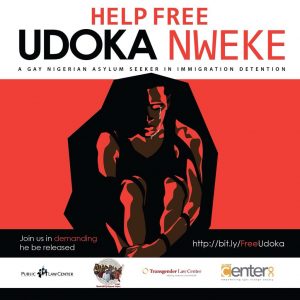 A press conference was held in front of the Immigration and Customs Enforcement (ICE) office in Santa Ana, Calif., for Gay asylum seeker and detainee Udoka Nweke, from Nigeria. Nigeria is one of the most dangerous countries for LGBTQ people. A coalition of Nweke’s supporters, including the Transgender Law Center’s Black LGBTQIA+/BLMP
(see “Queer Notes,” N&L, March-April 2018, p. 9), is working for his release from the deadly Adelanto Detention Center, where he’s been held for 15 months.

Lesbian activist Constance Kurt died at the age of 81 in May. She and her partner Ruth Berman had won domestic partnership benefits for all New York City employees in 1994 when they successfully sued the City Board of Education. They also started chapters of Parents, Friends and Family of Lesbians and Gays (PFLAG) in Florida and New York, and served as co-chairs of New York chapters of the Lesbian Rights Task Force.

Aryman Menem, a Syrian Gay man, is founder of Tea and Talk for Syrian LGBT, a safe space for Syrian LGBT persons in Istanbul, Turkey, who escaped Bashar al-Assad’s Syria and ISIS. Tea and Talk provides secure housing, refugee services, jobs and psychosocial support. Menem has decided to stay in Istanbul, even though it too is dangerous for Queer people. He knows of one Gay and three Transgender members of his group who were murdered.

About 8,000 marchers participated in Baltic Pride’s Pride Parade in Riga, Latvia, with its theme of “See Diversity! See Freedom!” Many supporters watched the peaceful march, which also drew protesters, including a man arrested for throwing a smoke bomb. Tallinn, Estonia, hosted Baltic Pride in 2017, which will be held in Vilnius, Lithuania in
2019.

← Stop genocide against Syrians
Demonstrations for refugees cover the entire U.S. →
This work is licensed under a Creative Commons Attribution-ShareAlike 4.0 International License