Brave Iranians are protesting the murder of Gay man Alireza Fazeli Monfared, beheaded by his family in a so-called honor killing as he attempted to flee Iran. Protesters are wearing Pride flags in public, knowing they’re taking their lives in their hands in a country where a person can be executed for being Gay. Journalist Masih Alinejad, who Fazeli Monfared followed on Twitter, provided a platform for youth to speak for themselves and broadcast videos of those protesting his death. She said, “Iran’s LGBTQ community is brutalized both by the regime and by bigotry in certain families.” After hearing of Fazeli Monfared’s murder, many Gay Iranians are emailing messages to Okan Sengun of the LGBT Asylum Project, fearing for their lives.

Students at Pendleton Heights High School in Indiana created an online petition that has gathered over 3,500 signatures to protest the administration demand that Pride flags be removed from classrooms. The petition calls for them to be restored in three classrooms. Other school districts’ teachers and some Pendleton alumni have praised the petition. Some administrators justified the ban to “maintain viewpoint neutrality,” arguing that if Pride flags could be displayed, so could white supremacist flags. Student Bryce Axel-Adams called displaying the flag a sign of support for LGBTQ students. 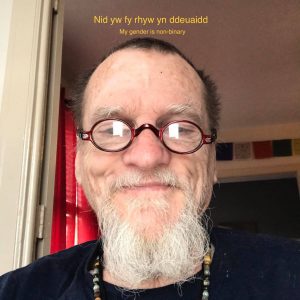 Nonbinary genderqueer Tryfan Morys Eibhlyn Llwyd, fighter for Gay liberation and the end of racism, died at age 70 in their home state of Kentucky. Llwyd helped organize against imperialism and racism, including against the KKK’s recruiting in the prisons. Llwyd took the Central American Pledge of Resistance to U.S. interference in Central America. They saw the intersections between racism, imperialism and homophobia. Llwyd helped raise awareness of AIDS through militant activism in San Francisco by participating in a blockade of traffic on the Golden Gate Bridge while raising a banner saying, “AIDS Genocide; Silence Death; Fight Back” and helped disrupt the San Francisco Opera’s 1989 opening night. Llwyd also protested drug maker Burroughs Wellcome’s high price for AZT.