THE ECONOMY AND DIALECTICS OF LIBERATION

Raya Dunayevskaya’s column on “The economy and dialectics of liberation” (May-June N&L) is very timely! In these Orwellian times, rich people are toasting good fortune, while working-class people are wondering when their checks will shrink or stop or the eviction notice will come. More strikes are happening, though not on the level before Reagan smashed unions. Still, unrest doesn’t necessarily mean revolution, especially when the far right is working night and day to channel discontent into their fake, racist, sexist, etc., revolt that is more about their power than liberating anyone. Too much of the Left has no clue, either trying to plan things out for the workers, or chasing after the whites who let racism get the better of them (and overestimating how many of them are actually working-class). When will we put the dialectics of liberation in the driver’s seat instead of creating new barriers between workers, youth fighting climate crisis, and all the other forces of revolt—and between them and dialectics of liberation in thought?

Charles Denby “led a walkout strike in an auto plant to get Black women away from the glue room and into the sewing room” (“Socialism, labor and the Black dimension,” May-June N&L). It is worth pointing out that he wasn’t saying Black women need more stereotypically feminine work. Actually, he was protesting the segregation policy. Only white women had been assigned to work in the sewing room, where air quality and other conditions were better than in the glue room.

Michigan Attorney General Dana Nessel dropped all the charges in the Flint water disaster—in order to start over with new cases. Her team of prosecutors includes Kym Worthy, Wayne County Prosecuting Attorney, who discovered tens of thousands of untested rape kits in a Detroit police warehouse and for years relentlessly pursued testing them and bringing justice to hundreds of women. People were shocked and confused at the news, but the cases are no longer in the hands of former Attorney General Bill Scheutte, who jumped into the Flint crisis only when he saw an opportunity to advance his political career. 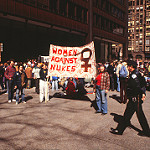 I am greatly impressed with the May-June issue of N&L. I cannot remember any other issue in the past two-three years that has the same sense of urgency. I love the inclusiveness, depth and clarity. As an advocate for total disarmament of the world’s 15,000 nuclear weapons, I emphasize the absolute importance of disarming all the nuclear arsenals of the world. Humankind has become desensitized to the mortal danger posed by nuclear weapons since the bombing of Nagasaki and Hiroshima in 1945. Then there was worldwide terror that these horrible nuclear bombs may spell the end of the human race. Today, nuclear weapons remain our greatest danger. The youth are keenly conscious of climate change yet seldom mention that an international crisis could provoke a nuclear holocaust. We need to shake people awake to the fact that nuclear weapons must all be destroyed if we want humanity to continue to exist.

Pro-nukers repeatedly describe the fears of us anti-nukes as “unreasonable fears.” I once asked Michael Shellenberger if he knew that “unreasonable” and “fears” were two separate words, but he didn’t think it was funny. However, our fears are real. That’s why those who are addicted to “progress” and who want to believe the lies of the nuclear industry and who believe nuclear power can be made safe have to make us look “unreasonable.” But they are wrong and we are reasonable. They ignore the future debt balloon awaiting the generations that will have to deal with spent fuel, the most dangerous substance man has produced, that lasts for 100,000 years (conservative estimate), has become 80,000 tons of extreme radioactivity, and we haven’t dealt with the first spoonful. Soon we’ll have to stop whistling past the graveyard because we’ll be in it. We are leaving behind a legacy of sickness.

We are being warehoused; there is no rehabilitation in U.S. prisons unless you seek it out for yourself! We need to stand up, fight and resist the Prison Industrial Complex! The time is now! Call your local congressman, write the President! Stop mandatory minimums—see famm.org (Families Against Mandatory Minimums). The Administration gets prisoners to kill each other and lose good time for less severe charges. We are U.S. citizens and going to be back out in society. The country needs to fix and change this corrupt system.

The rich are trying to throw away the key against people of color and poor white people. They are forcing us into work programs like Prison Industry Authority and make state money on our misery. I’m losing hope fast.

The public needs to see how these state prisons continue to steal money from us and our family and friends and it needs to be stopped.

I appreciate getting news from around the world that’s little publicized through other papers. I know there are things going on that just like in this prison (Google “Lucasville prison riot”) tend to get swept under the rug. It’s 2019 and we still don’t have proof that mass incarceration betters society, much less an individual.

Thanks for sending me the newspaper free of charge and for printing the article I wrote a while back about LGBTQ issues in the U.S. Just about every article printed in “Queer Notes” has shed light on the problems people in the LGBTQ community face. I respect y’all for being receptive. Lastly, I would like to say thank you for all the other guys y’all send N&L to as a gift that are unable to reach out to thank y’all on their own behalf. We appreciate y’all’s effort and consistency.

I’ve been the beneficiary of a subscription for the past couple of years. I’d like to extend my grateful thanks to the donor who made this possible. N&L has become an important part of my life. I greatly appreciate the foundational lessons coupled with current articles featuring their applications. My copy gets read and discussed with an engaged group. Prison can be an isolating experience. N&L is a conduit to the world.

← All power to the Sudanese revolutionaries!
Readers’ Views, July-August 2019: Part 1 →
This work is licensed under a Creative Commons Attribution-ShareAlike 4.0 International License