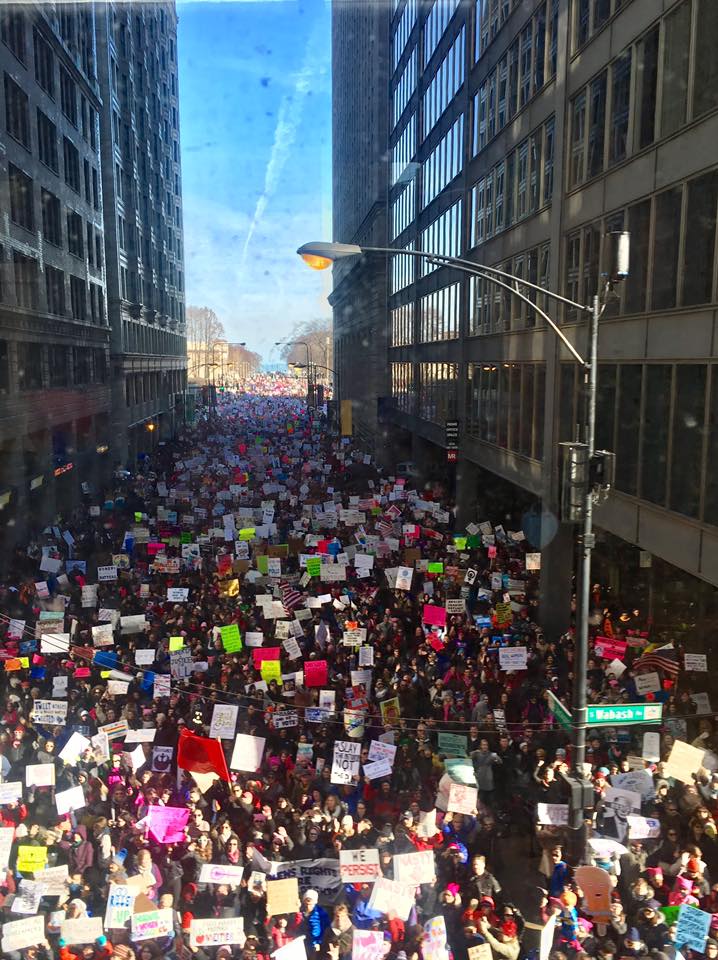 That was a great article by Terry Moon on “#MeToo, Women’s Marches Show the Resistance Deepens” (March-April N&L). I could hear her screaming at times, feel her passion and Reason! I loved how she showed the long history, decades of women’s struggles, and how it’s in relationship to other movements like Black Lives Matter—and on an international scale because the whole world needs changing. The best point was that what women are actually demanding is a different world, where we are seen as human and free to become. The relationship/connection of Say Her Name to #MeToo is something I’d never have thought of. But it makes sense. And, thank you for shaming the part of the Left who dumps on the Women’s March. I want nothing of their supposed radicalism; they’re despicable.

As expected, the security forces, in and out of uniform, prevented a March 8 International Women’s Day assembly in front of the Labor Ministry in Tehran. Many, however, did show up. Women were chanting: “This is the voice of freedom,” “No to sexual discrimination,” “Freedom, equality, sexual justice,” “Just and equal pay for women.” Dozens, including a woman journalist, were roughed up and arrested and taken by security vans to unknown places.

The 20th century women’s liberation movement made it possible to see the feminist dimension of Rosa Luxemburg. Raya Dunayevskaya saw it as integral to her thought and activity as a revolutionary—which is still not the way many view her. (See “Rosa Luxemburg as Feminist,” March-April N&L.) After reading some of today’s writers using Luxemburg’s speech on women’s suffrage as a weapon against “bourgeois” feminism—meaning any that doesn’t subordinate itself to class struggle—it’s a breath of fresh air to read of how, ten years earlier, she was already arguing that women’s suffrage would counter the sexist “philistine family life” atmosphere that infected even the socialist parties.

YOUTH IN THE BATTLE

The March for Our Lives was great. Bridging the gap between generations is so important, as often teenagers are just brushed aside and not taken seriously. It’s sad that kids getting shot in their own classrooms is what it takes to have kids taken seriously. These kids are amazing.

St. Croix in the Virgin Islands is in slow motion mode in terms of recovery from Hurricane Maria. More attention is paid to “getting the Island ready for tourists” than for the betterment and welfare of the locals, many of whom are still in dire need of help. The Federal Emergency Management Agency (FEMA) continues to assess damages, then gives a ridiculously small amount for restoration. Knowledge of the original purpose of FEMA makes it easy to understand its present manner of functioning. Until 1979 it was known as the Defense Civil Preparedness Agency. FEMA officials coordinated with Oliver North and drew up “emergency” plans to handle widespread uprisings in urban ghettos or widespread civil protests against a U.S. invasion. Their contingency plan included, among other things, establishing detention camps to hold up to 22 million African Americans.

Black Lives Matter has been gaining momentum here in the Bay Area after what happened to Stephon Clark in Sacramento. I feel almost disbelief at this local policy by the police of emptying their entire magazine (20 rounds!) at a suspect if there is the slight hint of a firefight. That is such a degraded thing to do even for law enforcement. Just five blocks from a friend’s house here police fired 99 rounds, killing a young Latino man in March. This is almost unprecedented, at least in my memory. 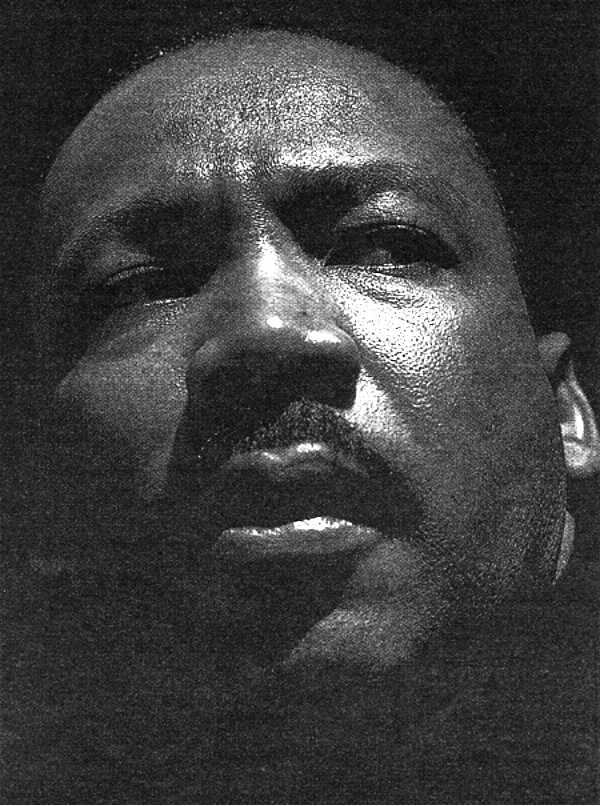 Thousands of people in Los Angeles marched for Dr. Martin Luther King’s birthday. Unfortunately missing was the spirit of the Black struggle for equality in housing, for decent jobs and education, a city to live in without fear from police violence or being incarcerated, without feeling that society does not know how to resolve its racism. As opposed to this rosy show, the Martin Luther King Coalition of Greater Los Angeles supports Black Lives Matter, ending mass incarceration and the criminalization of communities of color, healthcare for all, decent and affordable housing. The King Coalition calls for resisting police brutality, war, racism, anti-Semitism, anti-Indigenous and anti-immigrant hatred, attacks on women, LGBTQ people, the poor and homeless, the elderly, working people, youth and the environment.

The State of Michigan has stopped providing bottled water to Flint. An independent study of samples from 110 homes between October 2017 and March 2018 showed that with only a few exceptions the lead level was well below the federal standard for lead level safety. However, only 3,000 of 18,000 lead service lines have been replaced. Marc Edwards, one of the experts who exposed the water crisis in 2015, said that Flint residents should still use water filters. He undoubtedly was concerned about the severity of the problem that caused 12 deaths from Legionnaire’s disease, among many other problems. Churches and individuals have stepped in to provide free water since the State is refusing to do so. On April 11, two busloads of Flint residents went to Lansing to protest in the Capitol, demanding that the state government replace the remaining lead service lines.

Seán Ó Nualláin, chair of the International Congress of Irish Studies, was assaulted by a number of officials of U.S. Customs and the U.S. Border Patrol on March 8 at the Dublin Airport in Ireland. He said: “I was told that they rendered my application to enter the U.S. invalid. This is the point that things got ugly. I said fair enough, just give me back my passport and my phone, which they had seized. I assumed I was free to go but that actually was not the case. The official who had my phone and passport assaulted me and I ran across the airport floor back to Ireland as I saw it. This is not how they saw it and 10 of them ran after me and assaulted me from behind, drawing blood in the process. They then locked me in their little Guantánamo in their section of the Dublin airport, doing a full frisk including a crotch search. I was refused access to an Irish Department of Foreign Affairs official. When the Irish airport cops arrived to get me, there was a marked change of attitude and the Irish cops took all their names and then advised me to go to the police station to make a formal complaint of the assault, which I have done.”

Is this the Trumpian future: small countries and their citizens, beaten into submission? I protest this violation of the basic human rights of an Irish citizen by foreign thugs in his own country!

Those Western Leftists who are silent about the Bashar al-Assad regime’s genocide in Syria want us to believe they are outraged by the attacks on some of his bases. I can’t buy it. Some of these Leftists are as dirty as any colonialist. And Trump wants us to believe he is outraged by chemical weapons murders. I don’t buy that either, since he cares nothing for the hundreds of thousands murdered with conventional weapons (including by the U.S. in Raqqa). Unless the Assad regime is destroyed, Syrian people will continue to suffer and die, bourgeois democracy will continue to rot from within, and revolutionary hope everywhere will continue to be crushed. Humanity will stand with the Syrian Revolution or die without it. Long live Free Syria!

As much as I understand the urgency in alleviating the human suffering in Yemen, it angers me to read reports on how the United Nations Human Rights Council on May 3 held a donor conference for Yemen, collecting money as a way to wash away its guilt and its responsibility in the catastrophe there. Money promised to be sent won’t arrive in total to the most vulnerable, as previous donations never arrived fully, till now. This money is only a painkiller. The real remedy is to find a political solution, sooner than today. Afrah Nassar
Cairo, Egypt

The work y’all do has inspired me to want to become politically savvy and find my voice. Have y’all considered starting a book club and writing workshop? I think y’all could inspire prisoners and help us become activists in our own right. Furthermore, those who show they’re capable could come home and push the cause forward.

I really love your journalism, as do many of my friends. I do wish to keep receiving your publication when I am released. I will be homeless, so please send your awesome paper to the enclosed address so I can also share with my family and friends. 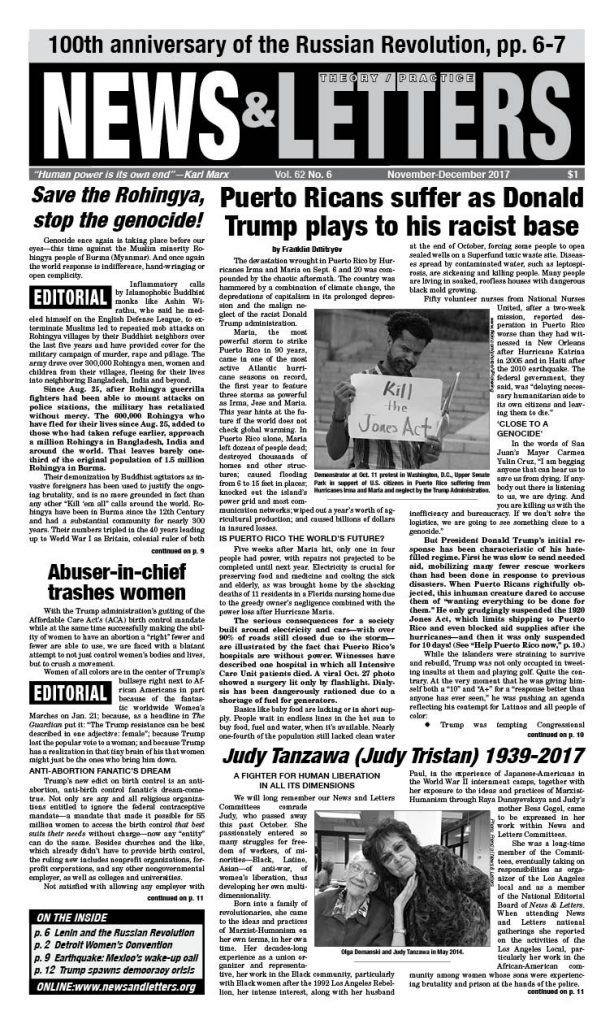 To donate a subscription to a prisoner, click here.

Your newspaper is informative to a fresh young mind, hungry for the light in a world and government based on lies and deceit. In a place surrounded by brick and steel, I can find comfort in N&L to insure that the word of the unheard have a voice to share. I am most interested in continuing to receive your paper. Thank you for your support and supporters who make it possible for me to receive N&L.

I really enjoy getting N&L. The read is always spot on. My sister is the only person who keeps in touch and helps with what funds she can. So for now I respectfully request that if a donor can be found to help me to continue getting N&L, please do so. When I’m out, I will subscribe and be a donor for someone else in need. Thank you for all the work and the truth that is printed in your paper. I share it with many and they can’t get enough either.

TO OUR READERS: Can you donate $5 for a prisoner who cannot pay for a subscription to N&L? Prisoners are eligible to continue their free subscriptions when they first get released.  To donate, click here.