I hope all my former German students remember a little about German language and culture. Watching what happened in Virginia, what I hope you really remember are the stories of Nina Katz, Dickey Ehrlich, and Karl Diamond, the survivors who came to our high school to talk about the Holocaust. They survived the worst hatred and bigotry imaginable and shared their experiences with us, so we will recognize evil when we see it and have the courage to stand up to it.

My children go to an urban, majority immigrant school. When we showed up for the first day of school, we were met by dozens of people holding handmade signs welcoming them in English, Spanish, and Arabic: “Everyone is welcome here.” These people took time out of their busy lives to make a community feel safe and welcome. These are not school employees or parents of students, just people from Memphis making America great again. 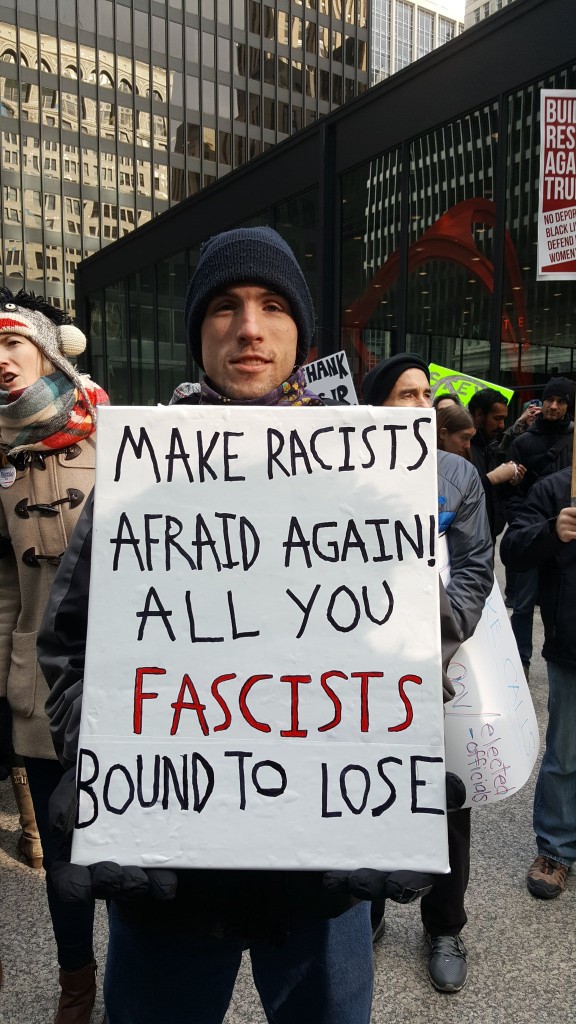 Trump’s attacks on Jeff Sessions are not just a spectacle. Commentators reveal a serious misunderstanding of the Trump administration when they say that Sessions had no choice but to recuse himself because of the Justice Department rules. Trump’s view is this: disregard the rules. Who’s going to do anything about it? Will the Justice Department go after its own boss? Will the Republican Congress? No one stops Trump from violating all kinds of rules and the Constitution. He has even nominated judges who believe that the Bible takes precedence over the Constitution, like a Christian Taliban. He demands loyalty to himself as person, not to his office or the government. This is the road to fascist dictatorship.

What happened in Charlottesville is horrible! What is happening in our country? Why are these horrible people being called “white nationalists”? They do not represent MY country! They are “white supremacist” racists—full of hatred for everyone but themselves. I feel sick that they even live in my country! This is not what America should be about! We should respect one another and work together for peace!

I’m so sickened by the right-wing Republicans’ hypocrisy. Ted Cruz and all are acting like they aren’t part of what created and emboldened the Nazis. All their policies are exactly what these white supremacists stand for, yet they feel free to say, “But we aren’t for hate. We believe everyone is equal.” Lying scumbags. I guess they’re one step above Trump in that they at least pretend they’re not hateful monsters. Like when the Ku Klux Klan still wore hoods to cover their faces. What they said is dangerous because it makes them look like normal people when they are anything but.

Conservatives have to take an honest look at themselves. What good is differentiating yourself from the radical Right when some of the conservative voices from yesterday are playing the role today of, literally, bringing the fringe ideas associated with Nazi forums online and taking them to the mainstream. “I hate the alt-right, but they do have a point with race, gender, religion, genetics, etc.” isn’t even silence, it’s complicity.

Watching reports of the white supremacists in Charlottesville, I asked myself, “How many of these guys are policemen?” I wondered how many of the counter-protesters were from Black Lives Matter, or were some just using their name. But who is that stupid to use swastikas? World War II is long gone. On Black talk radio a lot of people were saying they better not come to Detroit!

People are having a hard time finding good-paying jobs. Large U.S. corporations are constantly laying off workers as soon as they can replace them with computers and robots. This strategy for increasing profits cannot be blamed on working people who have come here from countries like Mexico or Guatemala. Furthermore, this country spends much of its national income on the military. This huge military spending is often supported by people who distrust those from other nations and so they back the foolish plans of politicians to attempt to control and dominate other nations through military force.

Striking reporters, editors and photographers in Halifax, N.S., Canada, voted on Aug. 10 to ratify an eight-year contract with the Halifax Chronicle Herald and end 18 months of walking the picket line. Terms of the contract sounded so favorable to the company that some union supporters who had canceled their subscriptions in solidarity with the strikers were reluctant to resubscribe. Terms included a 5% pay cut, increase in the workweek from 35 to 37.5 hours and management’s right to consolidate job titles. Yet 94% of the strikers accepted the deal, even the many who in effect were voting to be laid off.

One opinion was that workers had walked out last year rather than accept contract language that would have guaranteed the death of the union. They are returning to work with the fate of the union in the balance.

I had a moment of total shock when I heard a report of Trump’s tweet about purging Transgender people from the military. I find that disturbing coming from a guy who got six “white rich family deferments” as I call them, during Vietnam so that his coward ass didn’t serve. Now he has the nerve to try and reject people serving who are a hell of a lot more professional than his narcissistic, xenophobic ass is on even his best days.

The Association of American Law Schools moved its 2018 conference to Chicago from Austin, Tex., because the Texas Legislature okayed discrimination against immigrants and LGBTQ people. I applaud the Association’s decision and hope other organizations follow suit. I can’t help but wonder, however, why their concern with human rights didn’t kick in when Texas banned funding to Planned Parenthood and one out of every four family planning clinics in Texas closed. At the very least, 47,000 women lost healthcare, including thousands having to stop using their long-acting birth control. Medicaid-covered pregnancies increased by over 25% and unintended pregnancies and abortions also greatly increased. That was certainly an attack on human rights. Where’s the outrage over that?

I particularly appreciate the coverage N&L accurately gives those whose hands uphold the “other half of the sky” (women) and the LGBTQ. The degradation 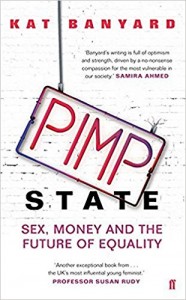 and constraints placed upon these people must not be overlooked in our overall struggle for liberation. Our “two worlds’ oppressed” movement must be in unison to deliver the crushing impact that the power structure so desperately needs. N&L continues to deliver your much needed service to the people.

I learned a lot of important things about the sex industry from Adele’s review of Pimp State by Kat Banyard. The review transformed me into being opposed to legalizing the sex industry, unless it is done by strictly following the Nordic Model. Otherwise women will surely suffer, and pimps, strip club owners, traffickers and brothel owners will continue to profit.

Despite unprecedented investments to end chronic homelessness and increase resources, homelessness rose 23% in Los Angeles County. This year 8,044 people experienced homelessness for the first time. The county is short nearly 552,000 rentals for very and extremely low-income households. A 2015 Economic Roundtable report stated that 13,000 people in L.A. County fall into homelessness every month. Elected officials aren’t doing enough to protect vulnerable tenants. Airbnb and the like are taking thousands of would-be long-term rental units off the market. Property owners are displacing tenants and kicking up rental prices. Landlords are increasingly using illegal tactics to push low-income tenants out so they can increase rents. Unless the City and County take concrete, bold steps in addressing disproportionate luxury housing development, gentrification and outdated policies that allow for the exploitation of vulnerable tenants, homelessness will continue to rise.

Over 200 demonstrators, Legal Observers and members of the press were arrested on Jan. 20, after thousands of demonstrators filled the streets of the nation’s capital to protest the inauguration of Donald Trump. A total of 222 people were arrested under felony “incitement to riot” charges that carry the possibility of ten years of incarceration and a fine of $25,000 if convicted. Additional charges, added later, could result in sentences of up to 75 years! We call on all people of good conscience to endorse the call to drop these charges here: https://itsgoingdown.org/sign-statement-solidarity-j20-defendants/. Police indiscriminately surrounded and arrested a group of people in violation of D.C. Code prohibiting mass arrests and requiring law enforcement to give dispersal warnings. The police needlessly deployed tear gas, pepper spray, concussion grenades, rubber bullets and batons. The media focused on isolated incidents of property destruction, not on police indiscriminately targeting people for arrest en masse based on location alone.

Samantha Bankston, an internationally published scholar with impeccable teaching and research credentials, has been unceremoniously dismissed from her position as Associate Professor of Humanities at Sierra Nevada College for daring to criticize the college publicly. In addition the College violated standards of academic due process by terminating her benefits, barring her from accessing her faculty e-mail account, and denying her the right to appeal. College administrators definitely overreacted. Please sign the protest petition at https://www.change.org/p/sierra-nevada-college-reinstate-faculty-positions-at-sierra-nevada-college.

This is a very informative paper that takes the side of the oppressed humans of the world, while giving an elaborate perspective on world topics and what we as the people of this world should be doing in order to counter these systems of oppression carried out by governments/corporations. All power to the people, for we need to read papers like N&L.

Research used to be a priority in all news but now it’s all about ratings. Nobody cares if it’s 100% factual or not. It’s no longer news, it’s business. That’s why I enjoy your paper to get another side to some very important stories. Without it I’d be lost. So thank you for the subscription and I hope to continue.

← Appeal: Your help is needed to change the world
Readers’ Views: September-October 2017, Part 2 →
This work is licensed under a Creative Commons Attribution-ShareAlike 4.0 International License