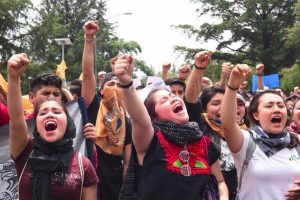 Terry Moon’s essay on “Socialism and Women’s Liberation” (July-Aug. N&L) is one of a few articles that tell what to look for and insist on in real socialism. It shows how too many serious theoreticians have relied unthinkingly on existing capitalism to lead us there. The writings of Marx have laid the ground for understanding what a truly human society, measured by how women fare, among other things, can look like.

Ms. Moon’s essay demonstrates that what passed for “socialism” was nothing of the sort, and that we need to theorize socialism anew, beginning with Marx. This puts her in opposition to many feminists, including socialist-feminists who failed to grapple with Marx’s Marxism, instead taking the ground of what passed for socialism/Marxism for much of the 20th Century. Silvia Federici is popular but, as Moon notes, she mangles Marx’s concept of reproduction of capital. Reproduction of capital and reproduction of the next generation are crucial, but to act as if Marx ignored women’s role in human reproduction is to put up a straw man, rather than grappling with how Marx dealt with the possibilities of the full, free development of all of humanity.

I was taught that Marxism was bad, along with socialism and all the other isms. It wasn’t until recently that I realized how messed up our current “democracy” is. I feel like N&L is the only non-biased news I get in prison. Here in Fort Dix, the staff is corrupt. You can’t write them up because they will retaliate and make your life a living hell.

I’m learning a lot more about Marxism now. It’s crazy how much mainstream America distorts Marxist/humanist ideas. Publications such as N&L will ensure more people have an opportunity to learn the truth.

I have a very intimate relationship with survivors of the Pelican Bay torture. But I’m so empowered and encouraged that others will follow the path that Faruq is carving out (“What is freedom?” July-Aug. N&L). I see you shining and feel your spirit. I know that this journey can be challenging from time to time. But you’ve got this.

Tehachapi’s facilities are all “SNY,” Special Needs Yards (see: “Prisoners endangered,” Jan.-Feb. N&L). I’m surrounded by sexual offenders, gang members, dropouts. We are hated by both staff and “general population inmates.” In SNY there are inmates that do not fall in either category. We are rebels and accept no orders, rules or impositions. As such, we don’t fit in the established prison gangs. We need video cameras to keep safe and use as evidence at disciplinary hearings. 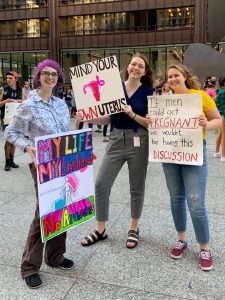 Counter-protest to anti-abortionists on July 15 is where we came out against the abortion bans. When the anti’s saw us, they decided NOT to go to the location they’d scheduled: the Ogilvie Metra terminal. This shows that confident women’s rights activists can counter the anti-abortionists, whose agenda includes making abortion illegal, banning contraceptives, rolling back LGBTQ rights and support for other right-wing attacks.

“Vicky,” a young woman in Britain, is trying to sue her biological father for raping her biological mother when she was 13 and he was 30. She said, “I wanted justice for my mum. I wanted justice for me. The ramifications of what he chose to do have shaped my entire life.” She wants to use her own DNA as evidence, but legal authorities claim she can’t since she is supposedly “not the victim.” It is such a contrast to how the religious Right here portray children conceived by rape as being so grateful to be alive that they will all oppose abortion for women impregnated by rapists. That attitude is a step away from saying rape is acceptable if it results in childbirth. People can value their own lives while saying that how they were conceived is not acceptable and even that they have suffered because of it.

Sexual depredation is a result of the patriarchy, of gender oppression. Capitalism is a system of class oppression. But society has evolved to intertwine class, gender and national oppression so intimately that it is not practical to think we can eliminate one without the eliminating the others. This doesn’t mean we ignore gender oppression now. We expose it, and we demand that it be stopped wherever possible. For instance, fighting against rape and rape in prison could reduce the suffering of many people.

The prison system is capitalism’s way of turning the Lazarus layer of the working class into a commodity. With incarceration costing over $30,000 a year, we see how valuable a prisoner is. The harsh drug laws and stigma attached to even being arrested, much less imprisoned, are designed to insure a constant flow of “human capital” from our poorest communities into the coffers of Prison Inc.

The prison and parole system is corrupt. It’s about making money, not about rehabilitating people. I would like to see more articles about that and about what we as the people can do. Is it really the rich got rich and the poor die off?

I’ve been in the “hole” for 1.5 years on a vindictive and retaliatory use for a fight with a guard. I have been finding methods to get inmates and guards to find a more humane and fulfilling relationship. Dehumanizing and militarized enforcement of corrections is only breeding resentment and destroying future transitions to communities. As an army veteran, I know well the faces of the oppressed and how the wave of an assault rifle needs no explaining. Smiles are also universal. N&L gives me ideas to try and do my part in creating unity. I believe Marx had sincere love for all and Humanism is where I seek change. So I put up “humans all around” signs on walls.

Thank you for exposing Trump for who he is. Without N&L and other socialist literature, I would have gone insane. The powers that be here attempt to destroy prisoners’ minds and make every attempt to “break” us. Abuse and injustice run rampant in prisons all across the nation. I’ve been a strong advocate for unity among prisoners. We have the power to overcome oppression, but we must work together. Until conditions are ripe for unity, I will resist, until the last prison is torn down, until the shouts of freedom and the end of all oppression ring in my ears.