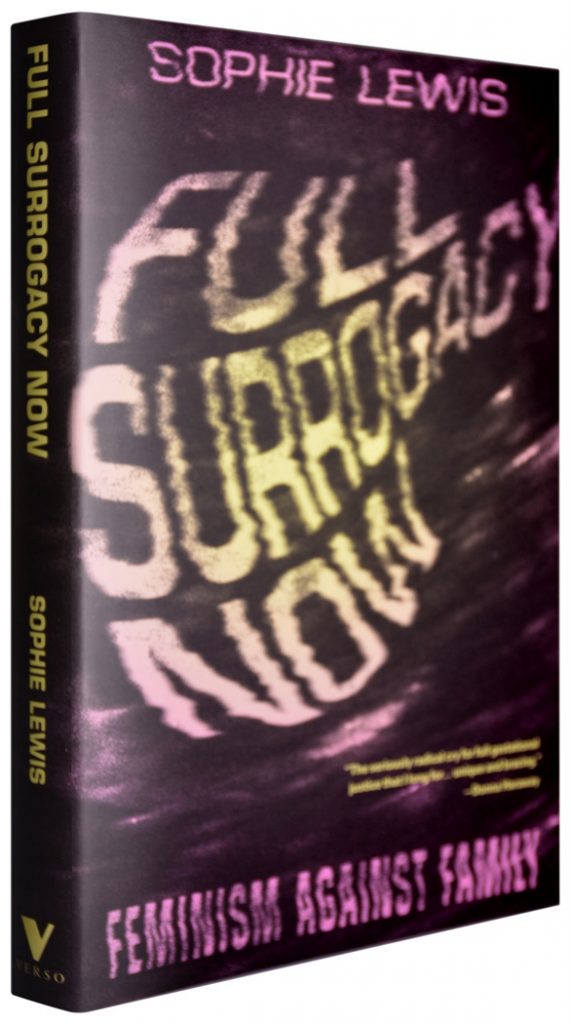 Sophie Lewis’ critically-praised book, Full Surrogacy Now: Feminism Against Family, is a disappointing attempt to find a radical path to a just society of new human relationships by way of commercial surrogacy. This increasingly popular practice involves paying a woman to gestate and bear a child for someone else. She can be artificially inseminated to fertilize her own egg cell or be implanted with a fertilized egg from another woman. There is a trend of wealthy white parents from the Global North traveling to the Global South to hire a woman of color to gestate and birth a baby using their own genetic material. The surrogate usually has no further contact with the child.

Lewis does provide an excellent critique of one surrogacy clinic in India, revealing its financial exploitation and poor treatment of the surrogates. However, she believes that surrogates could “seize the means of production” and form their own cooperatively-owned business. She says, after they get better working conditions, they would join the reproductive justice movement. They would fight for everyone’s right to have or not have children and to raise them in an environment of safety, health, and dignity. She says society would then take collective responsibility for children, abolishing parents’ supposed “ownership” of them. Commercial surrogacy, which already confuses the issue of which woman is the child’s mother, would fade away, replaced by a different kind of universal “surrogacy.”

Lewis is clear that her argument depends upon her notion that surrogacy is just another job. She does not believe it is an oppression inflicted upon desperately poor women. She does realize pregnancy and childbirth are dangerous and their danger is lessened by modern medicine and technology. However, she does not appear to know that surrogacy is documented to be even more medically dangerous due to injections of hormones and implantation of foreign genetic material. She even says this technology should be free for anyone to use. She completely dismisses the psychological trauma most surrogates report upon separating from the baby.

Although there is currently very little organizing among surrogates, Lewis spends much time discussing the sex-workers’ rights movement. This purports to be composed of women in prostitution and other sex industries fighting for better working conditions and decriminalization.

ONCE AGAIN: WOMEN TREATED AS THINGS

Several radical feminist writers in recent years have exposed this movement as orchestrated by pimps in organized crime. Survivors of prostitution have written about its inherent violence and inevitable psychological scarring. They reject the notion that being paid for this treatment is “empowering” or “produces value.” They support the Nordic Model of decriminalizing victims and criminalizing pimps and customers, which has been proven to decrease prostitution. Lewis uses the derogatory term Sex Worker Exclusionary Radical Feminist (SWERF), which implies it is feminists who are not listening to prostituted women. She proposes the term SERF (Surrogacy Exclusionary Radical Feminist).

Lewis is dismissive of the work of radical feminists such as Kajsa Ekis Ekman who have interviewed both women traumatized by prostitution and by surrogacy. In her 2010 book, Being and Being Bought: Prostitution, Surrogacy, and the Split Self, Ekman had already debunked arguments such as Lewis’. Theorists claiming surrogacy will lead to caring communities misrepresent the reality of surrogacy in which people are treated as things.

Those who give this book glowing reviews seem mostly intrigued by what families and communities could become after a revolution against capitalism. Lewis does vaguely mention other cultures’ more expansive systems of family/community and those formed by women of color in the U.S. Feminists worldwide have been forming various non-patriarchal families and female-centered villages. Rather than placing false hopes upon surrogacy, it would be more enlightening to study new relations in families/communities that already exist.

← Handicap this!, May-June 2020
III. Pandemic sets in motion the latent economic collapse →
This work is licensed under a Creative Commons Attribution-ShareAlike 4.0 International License