“I love Syria, and my soul is here. We didn’t start the revolution so that we can up and leave, but when it gets to the point where they’re going to kill my whole family and I am the reason why, I would leave my mother but I will never forget her. And my mother stays inside my soul until she is free. And my mother is Syria.” —Souad Nawfal, Raqqa, Syria

Don’t be confused. The Syrians had a revolution—one they are still fighting—it is about freedom. Those fighting for freedom are not terrorists; they are not religious fanatics. If you can’t tell the good guys from the bad, look at the women, who are almost always the first to act. 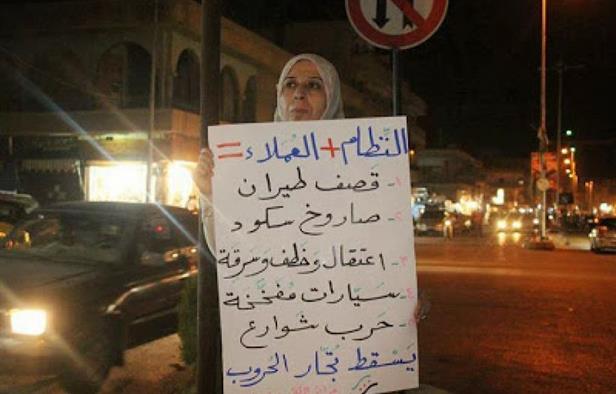 This is seen in the woman who made the statement that begins this column. Souad Nawfal is a teacher who, after Raqqa was taken by ISIS and they kidnapped a Jesuit priest friend of hers, stood alone in daily protests for two months in front of the local ISIS headquarters. She was harassed, spat at, hit, bumped by cars. She said, “Every day they’d point a Kalashnikov at my head and threaten to shoot me. I’d tell them, ‘Do it. If you kill me first, then the second bullet has to go to Bashar’s head.’ That’d irritate them.”1“The schoolteacher versus al-Qaeda,” by Michael Weiss, now.mmedia.me, Nov. 14, 2013

Her signs, penned to harass and embarrass ISIS, read: “Our revolution was begun by honorable people and is being stolen by thieves!” “Release all detainees!” and “Muslims spilling the blood of Muslims are sinners!” “These banners,” she stated, “Have kept me company, they have given me strength, they remind me that it is important to keep doing what we are doing until we are free.”2“The Raqqa woman who faced the Islamic State of Iraq and Syria,” SyriaUntold.com, Oct. 17, 2013

Also in Raqqa in March 2012 women formed Jana, whose purpose was to make it possible “for women to stand side-by-side with men in creating a country for all Syrians.” They created jobs for women: baking and passing out bread when there were shortages, teaching crafts, creating projects to keep children in schools and setting up ways to share medicines—a necessity because of shortages.3“Jana: Women of Raqqa Reclaim Their Place in Society,” SyriaUntold.com, Nov. 30, 2013

It was women, also in Raqqa, who, on June 17, 2013, staged a sit-in at ISIS’s headquarters demanding the release of those imprisoned. To show they were 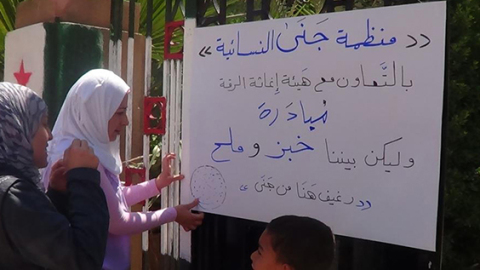 fighting the theft of their revolution they chanted the same slogans they had used against the brutal Assad regime: “There is nothing holier than freedom and no worse sin than stealing it!”4“Raqqa: Women against Al-Nusra Front,” SyriaUntold.com, July 6, 2013

Women in Salamiyah in central Syria organized one of the first protests in their town, a silent march. Assad’s thugs attacked it ruthlessly. When it became too dangerous for street demonstrations, the women did something new: “We organized sit-ins inside of our houses where we held banners and statements that presented our political views and our resistance to the brutality of the Assad regime.” They got the film of their actions out to the world via social media. Their message was clear: “We want freedom, we want dignity, and we will demand these until the murderer falls and is finally executed.”6“The Women of Salamiyah Turn Houses into Protest Squares,” SyriaUntold.com, May 10, 2014

There is much more, but here we can only lastly mention how in the midst of what was to become a holocaust, 24 women and men—mostly women—created an underground newspaper, Enab Baladi, whose mission was to tell the truth of Syria and the crimes of the Assad regime. One of these women, Kholoud Waleed, explained, “We’re the gang of girls. [Assad] would kill us, but he can’t find us.” Amazingly the paper continues and you can see it at http://english.enabbaladi.net/.

Enab Baladi documented one of the worst massacres of the Syrian war when Darayya was sealed by Assad’s army whose soldiers went door to door, killing the men, destroying homes and schools, slaughtering entire families, raping and pillaging. We know about it because of their bravery.7“This ‘Gang of Girls’ Risks Their Lives to Report From Inside a War Zone,” by Christine Asquith, elle.com, May 2015 issue of Elle

This is a fraction of what Syrian women have done, revealing themselves as force and reason of revolution. As in any revolution, women’s self-development is either part of the revolution from the beginning, or becomes a demand through the necessity of breaking tradition and taboos to become a thinker and participant in the revolutionary project.

What Assad aims to destroy is not alone the force of the revolution against him—the living human beings fighting for freedom. He as well wants to kill the idea of freedom, the striving to become whole human beings that is the foundation of all revolutionary uprisings. We cannot let him succeed.

One thought on “Woman as Reason: Syrian women as force and revolutionary Reason”