Twenty years ago in July 1995, over 8,000 mostly men and boys were massacred in Srebrenica, Bosnia and Herzegovina. Supposedly protecting a “safe area,” the 400-strong UN “peacekeepers” did nothing while thousands were murdered, almost in front of their eyes.

NAMING RAPE A CRIME AGAINST HUMANITY

At the same time, over 30,000 Bosniak women, children and the old were forced from their homes. During the three years of war, thousands of Bosnian women were brutally raped, many murdered, many sexually tortured, all as a deliberate tactic of war to target and savage civilians and non-combatants; to destroy a people determined to live a multi-ethnic existence. The intent was genocide. It was the experience of these women, backed up by a massive outcry, that forced the UN to name rape in war, for the first time, as both torture and a crime against humanity.

“Facing, drawing the correct lessons from, and then acting against genocide in Rwanda and Bosnia is not a separate question from combating racism and fascism at home—it is the same question…We need to support and learn from the emancipatory, multi-ethnic forces in Bosnia and Rwanda which, under tremendous pressure to mimic their enemies’ ethnic chauvinism, have instead attempted to remain true to the ideal of a non-racist society.” 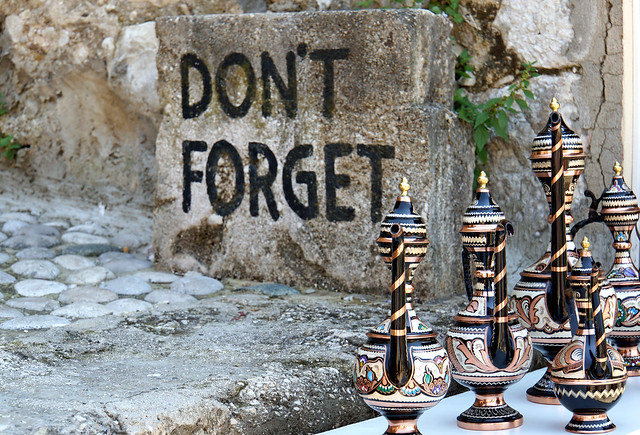 One of several monuments in Mostar, Bosnia, in remembrance of the horrors of war. Picture credit is to Dennis Jarvis: https://www.flickr.com/photos/archer10/10481408215/

That passion to “remain true to the ideal of a non-racist society” is being realized in a unique project: the convening in Sarajevo, Bosnia, on May 7 of the Women’s Court on war crimes against women during the war in the 1990s.

The very way they have organized the Court over five years, involving women from the entire region, shows that passion. Women came together from all corners of the former Yugoslavia to demand justice for the crimes committed against them during the wars and the suffering that followed. Women participating are from regions that were involved in the multi-sided war: Bosnia and Herzegovina, including Srebrenica, Croatia, Kosova, Macedonia, Montenegro, Serbia and more.

As Marieme Helie Lucas, a founder of Women Living Under Muslim Laws, writes:

“This [convening of the Women’s Court], in and of itself, is a huge achievement, at a time when Europe is plagued with the rise of nationalisms, of extreme right-wing forces that divide people along ethnic and religious lines; at a time when attempts are made to homogenize nations and to exclude minorities and diversity; at a time when even citizens of one country are further separated by the construction of antagonistic ‘communities.’…The fact that women came together from all the nations of ex-Yugoslavia is not just a powerful show of solidarity across boundaries. It is also a political stand, defying the destructive, extreme rightwing forces at work in the region and in the whole of Europe.”

Women in Black-Belgrade (WiB-B), Serbia, did a tremendous amount of work to bring the Women’s Court into being. It was WiB-B who, in the midst of that war, stood on the street corners in Belgrade and condemned the deadly aggression of their own government. They were spat on, screamed at, threatened with death and physically attacked.

They persisted then and kept persisting for 20 years to make sure that the world does not forget and that the criminals are named. They helped make it possible for women who suffered unimaginable loss and atrocities, to make it imaginable, to name and speak the reality of inhumanity and to articulate what must be done and how to move forward.

The process of bringing the Women’s Court into being changed women’s lives. The Women’s Court is the opportunity for women from the region to finally demand justice and to tell not only what happened to them in their own words, but also what needs to happen for them to receive justice and peace. While the Women’s Court has no power in the bourgeois sense, as Marieme Lucas explains, “it will name the crimes and the perpetrators, it will denounce the links between the different forms of violence that women suffer till today in the former Yugoslavia as a consequence of the wars, it will demand justice and, relying on ‘the power of international women’s solidarity,’ commit to monitoring the responses from concerned authorities.”

The power of the Women’s Court is also revealed by the women who testified: “We are women who fight for justice. I will always live in solidarity with these women. Together we can laugh and cry. I only wish that this group of women would rule the world.”