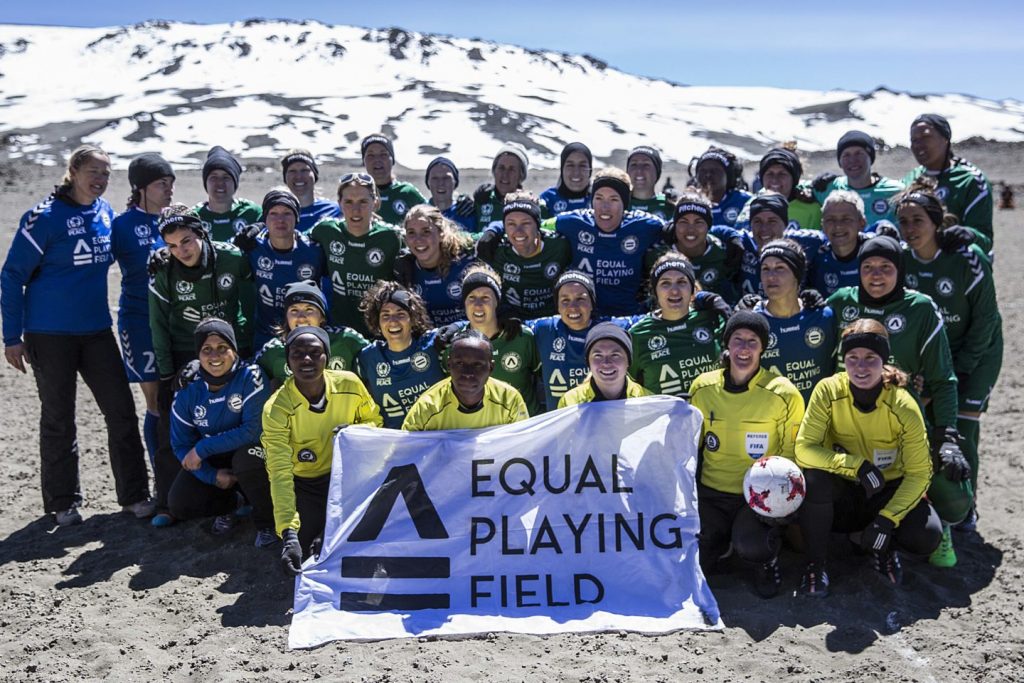 Equal Playing Field (EPF) is an organization of women soccer players from 29 countries, including the U.S., Pakistan, Spain, Syria, France, Venezuela, Palestine, Tanzania, Canada and Australia. In April, they formed two all-female soccer teams and set a record for playing the lowest altitude FIFA accredited match next to the Dead Sea in Jordan. Last year, they set a record for the highest on Mount Kilimanjaro. The picture above was taken there. The
players travelled through Jordan, Tanzania, and South Africa to play exhibition games and set up soccer clinics for girls in local communities. EPF’s goal is to promote women’s sports and introduce girls to soccer so that they can participate in public life, associate with boys as equals, and learn the benefits of sports, including teamwork and accomplishment.

In June, over 30,000 women marched in Seoul, South Korea, to protest law enforcement’s lack of response to men using hidden cameras to film women in restrooms, gyms, baths, and other public areas. Men upload these invasive films to the internet as a genre of pornography called “molka,” prompting women to wear masks and search for cameras in restrooms. The marchers wore masks to prevent harassment and chanted, “Those men who film molka,
those who upload it, those who watch it, all should be arrested and face stern punishment.” Signs read, “My Life is Not Your Porn” and “Wanna Shit with My Guard Down.” An organizer stated: “We are reclaiming our right to challenge existing conditions that aggravate sexual discrimination. We are raising uncomfortable issues.”

In Sudan, 16-year-old Noura Hussein was married against her will, although underage and forced marriages are unconstitutional there. She hid with her aunt until she was 19, when her family kidnapped her, giving her to her husband, who raped her. When he attempted a second rape, she stabbed him, and a court convicted her of murder, sentencing her to death. Her supporters, including the activist group Equality Now, organized an online petition,
receiving over a million signatures. In June, an appeals court reversed the death sentence, finding her guilty of manslaughter and sentenced her to five years in prison.

← Rapists freed in Spain
Woman as Reason, July-August 2018: Bulwark against reaction →
This work is licensed under a Creative Commons Attribution-ShareAlike 4.0 International License