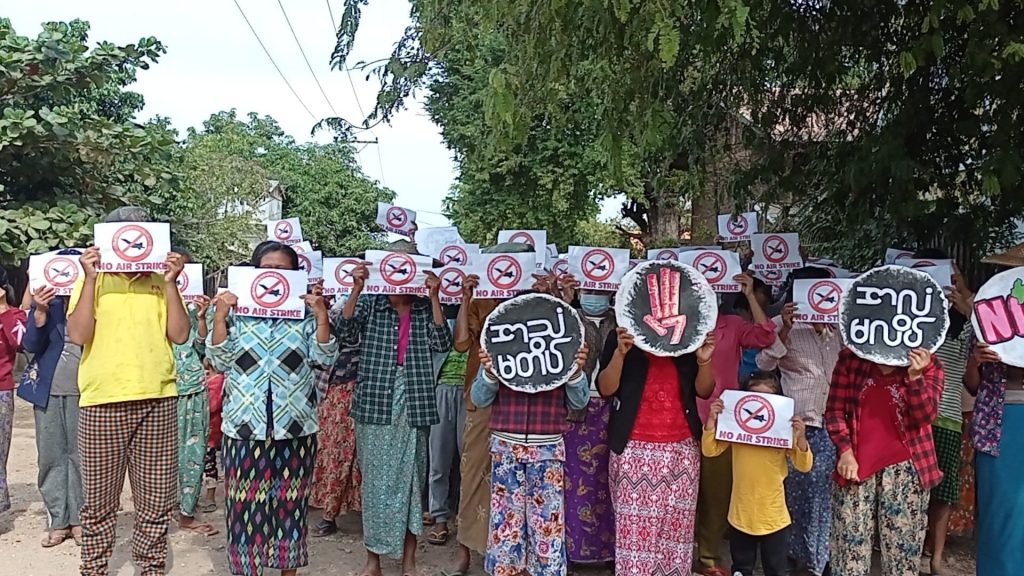 Demonstration in Yinmabin Township, Myanmar, on Jan. 18, 2022, one of many that are defying the Tatmadaw. Photo: Michael Sladnick

About 40 young protesters ran down a street in Yangon for several minutes on Dec. 29, carrying a banner that said: “Fight for Our Rights.” A video of the event, posted online, ends with the burning of a Myanmar military uniform. Then the banners and signs are thrown down and the protesters disperse in all directions. Massive pro-democracy marches against the coup of Feb. 1 have been halted for now because soldiers and police simply shoot everyone who shows resistance.

Even small demonstrations like the one in the video represent a mortal risk for the participants. At least two of the demonstrators held signs calling for a “no fly zone in Myanmar.” People in Kayin state, who have been claiming autonomy for more than 80 years, now have an active request to the UN for a no fly zone to protect them from regime airstrikes. The solidarity with them from the youth of Yangon is emblematic of the thoughts and actions of demonstrators throughout 2021, when the diverse peoples of the nation came together in opposition to dictatorship and fascism, and forged new human connections.

Students at Chicago’s Goode STEM High School walked out of class on Dec. 13 to decry unchecked racism in their school, including racial slurs and the disproportionate targeting of Black students for punishment. One of about 50 students who walked out, Kendall Canteberry, was interviewed by Chalkbeat: “We are tired of the racism, tired of how we are being treated….[R]egardless of how many times we report [instances of racism], nothing has changed. They always say the same thing: ‘Changes will be made soon.’ We hope that this protest and this walkout finally changes things…I really hope we can really sit down and change things for students and staff to be happy.”

Activists from the Kurdish Youth’s Assembly in London marched through Trafalgar square on Jan. 9 to mark the ninth anniversary of the gruesome deaths in Paris of three Kurdish women: Sakîne Cansiz, Fidan Doğan and Leyla Şaylemez. Given their activism for Kurdish autonomy, the women were likely shot by an assassin who worked for the Turkish government, or some independent group of chauvinist ultra-nationalists. A press release from the Assembly stated: “In an era where transactional relationships of EU states with Turkey are superseding the rule of law, we condemn the silence of international governments against state barbarism.” The youth protesters marched carrying signs that said, “Paris, city of shame. Justice for our Heroines!”