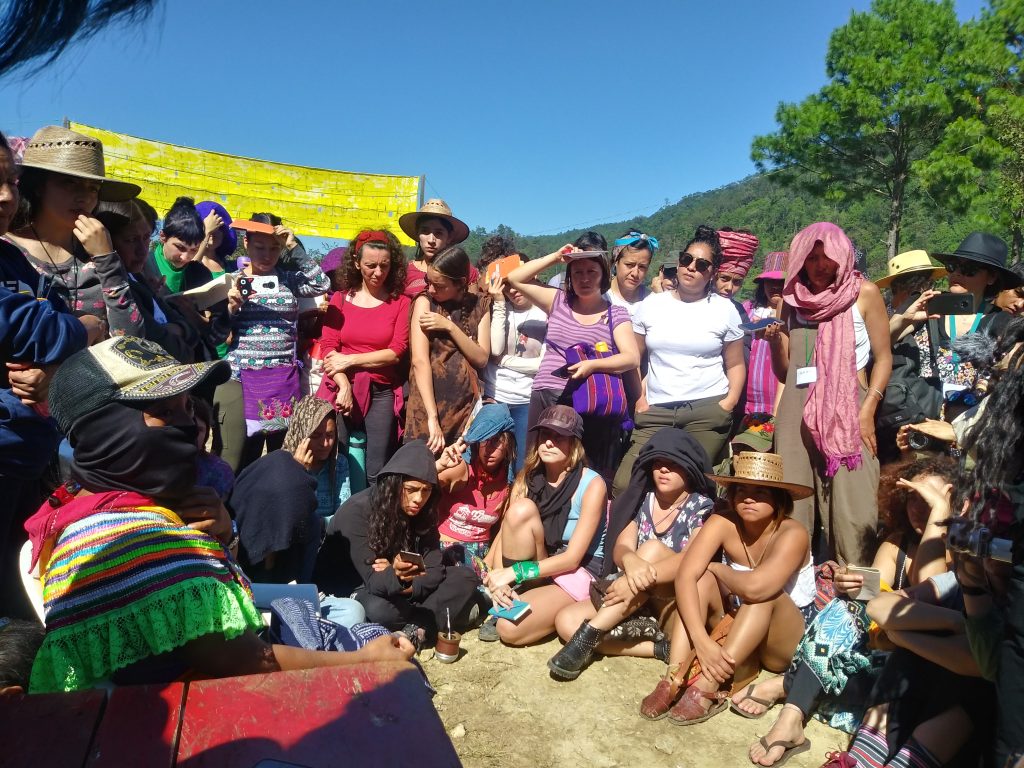 Women at the Zapatista Gathering of Women Who Fight. Photo by Ángeles for Praxis en América Latina and News & Letters

In Altamirano, Chiapas, the Second International Meeting of Women who Fight was held from Dec. 27-29, 2019. Thousands of women from 49 countries were received by the Zapatistas. “They keep killing us, they demand, they order us to be well behaved,” said Commander Amada of the Zapatistas during the commencement of the meeting.

The main theme of the meeting was gender violence, and at the end of the convocation hundreds of women, who had been waiting to be heard, spoke out. The agenda dedicated the first day to making a single roundtable of grievances; the second to sharing ideas and experiences, and the third for culture and art. But there was not enough time to hear all the women who wanted to take the microphone.

Roundtables, workshops, conversations and presentations of projects came together spontaneously, where women were the voice of the diverse struggles and proposals.

The themes were: the struggle for land; against the government’s genocidal megaprojects; against violence, selective killings, massacres, hegemonic medicine, economic and labor violence, prostitution; the defense of student and migrant rights, among others. The different struggles must be recognized, as they are all the fight against oppression in Mexico, Latin America and the world.

Hands took the microphone and women began to tell one story after another: “You are not alone!” “We are all Diana!” “We are all Norma!” Facts that are not spoken because there are no words to tell them, neither for violence against land defenders like Lilia Vázquez, a Chilean woman killed in the fight against a Canadian mining company; nor the 13 stabs to another defender for acting against a hydroelectric dam, nor women slaughtered for building peace; Berta Cáceres, murdered in 2016 for loving and defending the river from death; Guadalupe Campanur, for preventing her land from being devastated and violated; Eli Juárez, Bolivian, and Juana Guisper, for fighting for the same reason. Cynthia Orozco of the Movement for Socialism (Bolivia) reads a letter calling on the diversity of struggles to unite against violence: “IF WOMEN STRIKE, THE WORLD STOPS.”

The final agreements: 1) All make and know proposals on how to stop violence against women; 2) respond to the call of every woman from every place, race or age asking for help; 3) all the groups of women who fight and want to coordinate collectively for joint actions, exchange communications; and 4) that in the joint actions of women fighting around the world, wear a black bow in mourning for all murdered and disappeared women from all over the world.