Once you are aware of your true nature, the universe becomes a friendly, supportive nurturing place in which to explore and grow.
—The Toltec Way

I’m a native Midwesterner, who had to journey into this new Jim Crow system as a lost rebel…knowing no other means [by] which to assert meaning to my young existence. It was inside this system that I met conscious Bruthas who helped me learn knowledge of self, rediscover my humanity and affirm my dignity and heritage—a journey that has been an awakening of my humanism… 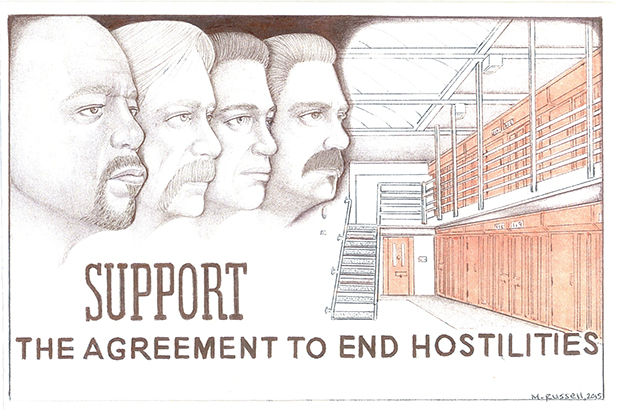 Prisoners at Pelican Bay SHU worked out The Agreement to End Hostilities in response to prison authorities setting prisoners against each other. The Agreement expresses the bases for what is now the Prisoners’ Human Rights Movement. Art by Michael Russell.

I want to share the “significance of the PHRM Blue Print with a view of spreading it to other movements beyond prison reform,” as you wrote. I/we (my co-author/signer of the Blue Print) both concur with your insightful points/visions.

Being that we are in mutual agreement with the “Humanism-empowerment,” we’re interested in what you believe and suggest the proactive steps that activists can progressively take to:

1. Think/discuss and emulate the humanism that animates the movement?

2.  Establish a “voice beyond its expression in the next activity”?

3. Persistently drive to be self-determining as the most concrete dimension of being human?

4. (Sitawa asks of you) what specific grassroots groups/collectives out there do you perceive would fit in the view of spreading our Blue Print to other movements beyond prison reform”?

He says (I/we concur) “Let’s make this be our starting point” and get back to letting me/us know what aspect of the Blue Print are you referring to in this regard?

We look forward to your reply…

Thank you for your thoughtful reply. I love your quote regarding one’s “true nature.” The question of what is our true nature—for me, our nature is the

drive to freely determine our life activity—and the question of being fully aware of that nature, captures the essence of the new sense of concrete I was trying to speak to. That new sense of what is concrete comes to the fore more prominently when a movement looks for a way to continue after achieving an important milestone, as the movement against indefinite solitary confinement did with the settlement of the Ashker case.

At first what may seem most concrete is the immediate obstacle to freedom like indeterminate solitary confinement. After a victory, as many find themselves in the general prison population, the experience of fighting for freedom has changed. What I see you asking is how to continue being/becoming what we started to become in the previous fight. In other words, what is concrete is not merely the obstacles “out there,” but also the power of our “true nature” in overcoming obstacles.

One way I would address your point #1 is to further elaborate what is our “true nature.” Many forms of humanism exist in freedom movements today: Black Lives Matter calls for recognition of Black lives as human, women’s liberation worldwide demands recognition of women as fully human, the refugees from the myriad wars around the world ask “what about our humanity?” Even the environment is a part of our natural existence, now threatened by activity that disrespects it.

How did we lose what you quote from Toltec Way: to experience “the universe…[as] a friendly, supportive nurturing place in which to explore and grow”? One casualty of not being true to our nature is what labor has been reduced to under capitalism. We sell our life activity, our ability to labor. Our labor becomes a mere means to life, rather than an exploration and growth of our true nature. Another aspect of this loss is the destruction of nature, which for capitalism is only a raw resource to be exploited. Because we are alienated from our own labor, it is not an expression of our life activity, it does not flow from our true nature, it becomes destructive of both our human nature and external nature.

Today, especially with the election of Trump, we are running out of time: we either consciously work out what is our “true nature” or we destroy the planet, either through war or an ecological disaster.

The discussion of humanism is absolutely urgent and open-ended in the sense that it allows concrete connections to other movements, not as a list of issues but as aspects of the same fight. The question I see raised in the Blueprint—how does the power of the humanist idea that animated the movement that won the victory of abolishing the use of long-term solitary confinement continue in the new situation—was also raised by Faruq in discussing the humanism of Frantz Fanon, and by Black Lives Matter founder Alicia Garza at a recent meeting in Oakland (see “Revisiting Fanon,” Nov.-Dec. 2016 N&L). Garza sees Black Lives Matter as a re-humanization and asks what happened to the African Revolutions of the 1960s and 1970s whose self-proclaimed humanism ended so badly.

To me, the Blueprint is reaching for a way to not limit the next stage to fighting something “out there,” like the parole board or lack of programing or still inhuman conditions in the general population. A discussion of our “true nature,” in my view, engages the Blueprint’s recognition of who we are, based on “The Agreement to End Hostilities.”

The Agreement explicitly breaks with the definition of who “I” am based on what the prison system makes of race. It asserts that the fight against racism, for example, includes recognition of our common humanity. Which brings us back to who we truly are: self-determining beings aware of our true nature, which also demands mutually recognizing each other as agents of our destiny.

The idea of our common true nature is concrete, especially as it unfolds in fighting racism, or sexism, or the attempts to de-humanize prisoners. Our time makes us face who we are. People feel and think that the world as it exists now is unsustainable. They are alienated from it. There is a foreboding and unease about what is going to replace the world as we know it. The anti-globalization movement had aspirations of global human solidarity, yet now fascism and narrow nationalism has arisen all over the world posing as an opposition to globalized capitalism. The U.S. is turning the powers of its highest office over to a fascist nationalist, an open misogynist and racist hater.

Can humanism, the power of the idea of our common true nature, become a beacon for those looking for a different answer? Doesn’t it demand thinking through the meaning of our activity as we overcome the myriad obstacles to freedom? Perhaps this is what Faruq meant when he quoted: “…to be able to catch what is significant in your own activity is a life and death question.”