On Sept. 19 a 7.1 magnitude earthquake caused the death of at least 320 people in Mexico City, Puebla, Morelos, State of Mexico and Guerrero, as well as the destruction and damage of dozens of buildings. A few days earlier, on Sept. 7, an 8.2 magnitude earthquake had killed nearly 100 people in southeast Mexico (mainly in Oaxaca, Chiapas and Tabasco), as well as leaving thousands homeless. Still another earthquake—of 6.1 magnitude, on Sept. 23—ended the life of three more people in Oaxaca, while bringing down constructions previously damaged.

To be sure, earthquakes are natural phenomena and impossible to avoid. However, their consequences are not “natural.” Rather, they are directly related to the social conditions in which they occur and our response to them. Most of the victims are from the poorest people: families who live in old apartment buildings, workers in antiquated constructions, Indigenous communities in precarious housing. Even when the buildings are new, as in Portales Sur in Mexico City, why did they collapse? If builders and contractors didn’t follow the proper building codes, why did the State allow them to build?

The earthquakes have thus brought to the fore, once again, the corruption of the government, as well as the social inequalities in the country. 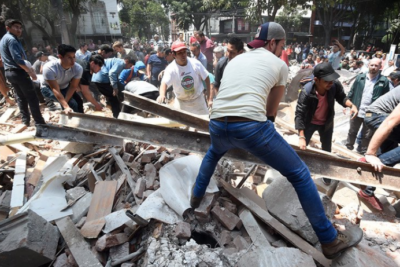 With more than 20 students confirmed dead, parents could only wait in hope as rescuers searched in the rubble of the devastated school in Mexico City. Photo: Brian Voldigar/Twitter

While the poorest people are always the ones most affected, it was they who made possible, through their collective self-organization, the rescue of dozens of people trapped under the debris, as well as the collection of food, clothing and health items for the victims.

Employees of Civil Protection, the army and other government institutions weren’t enough to solve people’s needs. They could not get to people who needed their help in time in the critical moments after the earthquakes. Furthermore, officials were often an obstacle, as they closed access to disaster zones, stopping civilian rescuers from working, despite their experience. As well, they bureaucratized the delivery of aid, and there have been reports that some officials simply stole it.

Two significant scenes show the division between the government’s way of handling the situation versus that of ordinary citizens: 1) When the Secretary of State wanted to capture the attention of the television cameras in the middle of a rescue action in Mexico City, the people pushed him away, demanding that he “let them work,” as this was no place for interviews,1The video can be watched at https://www.youtube.com/watch?v=vIvqO6cm5No. and 2) when, after just 36 hours of searching, the army wanted to “activate the protocols” to look for corpses instead of living human beings, the people demanded that looking for living survivors must continue without the use of destructive machinery.

A few days after the Sept. 7 earthquake in Chiapas and Oaxaca, the National Indigenous Congress (CNI) raised precisely the question of solidarity that springs from below versus the opportunism that comes from above:

“As is usually the case, the bad governments are only going to mock our suffering, taking pictures of themselves in front of the rubble and making money off the pain of the people struck by tragedy. For this reason we call upon the men and women of good conscience, the collectives of the Mexican and International Sixth and the Mexican people as a whole to be in solidarity and to bring blankets, medicine and non-perishable foods in support of the villages of those regions….We also call for the opening of collection centers across the nation in order to channel support through the CIG [Indigenous Governing Council] so that it directly arrives to the affected villages.”

The CNI also reminded us about “the continuation of the capitalist war to dispossess our peoples, particularly the autonomous Tepehuana and Wixárika community of San Lorenzo Azqueltán in the municipality of Villa Guerrero, state of Jalisco, which is facing displacement from their lands by supposed small property owners and aggressions targeting the peoples’ agrarian authorities.”2http://enlacezapatista.ezln.org.mx/2017/09/14/communique-from-the-cni-seeking-solidarity-with-the-peoples-affected-by-the-earthquake-and-denouncing-ongoing-capitalist-dispossession/

Thus, earthquakes don’t destroy class divisions but reaffirm them. Isn’t it precisely capitalism that turns natural phenomena into deeper tragedies? Isn’t it capitalism that, in order to save production costs, puts dozens of workers in old buildings, like the one that fell down in Colonia Obrera in Mexico City? Isn’t it this social-economic system that by paying minimum wages forces families to live in precarious homes? Isn’t it this system that, by concentrating work in big cities, causes their chaotic growth, raising the risks from “natural disasters”? Isn’t it the one that wants to build an airport on the highly seismic zone of the Texcoco Lake, putting in terrible peril the life of millions of people while dispossessing hundreds of their land?

As well, the State (capital’s administrator) prefers to use the public budget in the “electoral game,” instead of using the funds to help victims of the earthquakes. Why are hospitals, transportation and communications only free during these catastrophic moments and not as a regular right? For capital and the State, the only thing that seems to matter is raising the profits. The preservation of life is, for them, a mere “by-product”: if there were no living workers, who could produce wealth for them?

September has been a month of grief and commotion for all the Mexican people. For days, our efforts were only aimed—and had to be aimed—at trying to rescue survivors from the earthquakes, as well as to help other victims. It is precisely here, in the solidarity and self-organization that springs from below, that the possibility of a new world, beyond capital, with new human relationships, appears. How can we make it blossom? Will this movement from below, splendid in itself, suffice for that, or would we need something in addition to it?

← What it means to be ‘a good company man’
Puerto Rico devastated by hurricanes, colonial exploitation, and Trump’s racism →
This work is licensed under a Creative Commons Attribution-ShareAlike 4.0 International License