The warfare that broke out between Armenia and Azerbaijan in late September, over the disputed region of Nagorno-Karabakh, took the lives of thousands of soldiers, and hundreds of innocent civilians, on both sides. Hundreds more civilians were injured. It was the most intense round of fighting since 1994, when war over the territory broke out between the former Soviet Republics.

As Marxist-Humanists, we support the anti-war forces on both sides, like the youth who stated: “It is long due that we, Azerbaijani and Armenian youth, take the resolution of the outdated conflict into our hands. It should no longer be the prerogative of the men in suits, whose aim is the accumulation of capital, both economic and political, and not the conflict’s resolution.”

WAR AS TRAGEDY AND CRIME 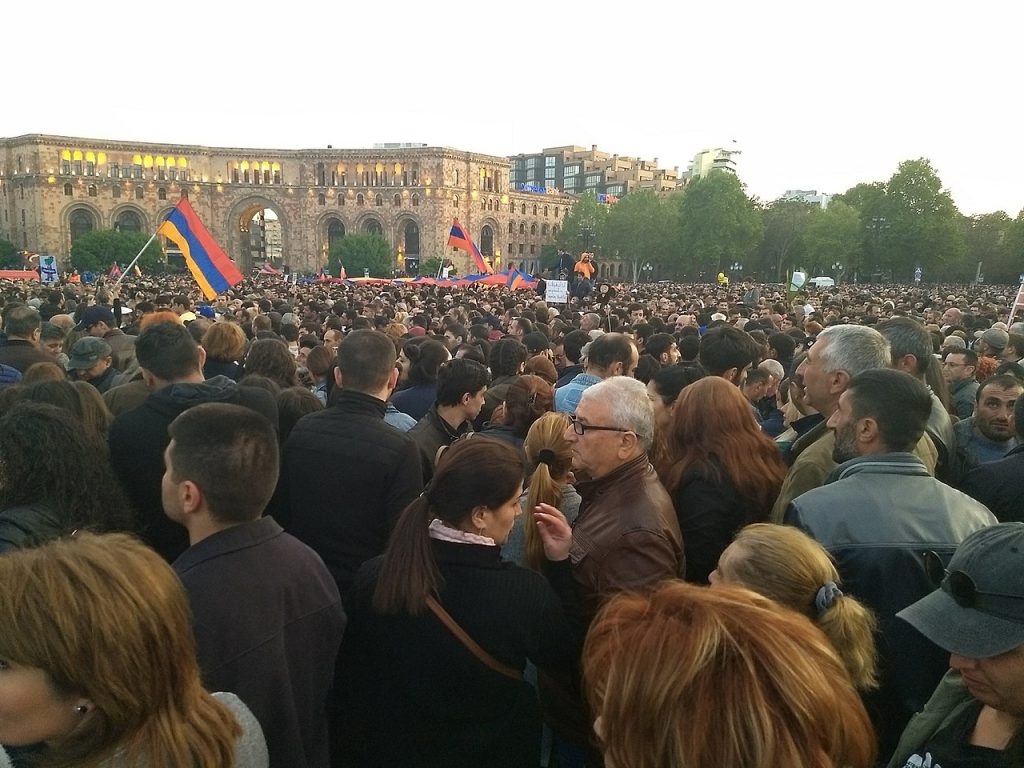 Protesters in the public square of Yerevan, the capital of Armenia, on April 22, 2018. They were demonstrating against Serzh Sargsyan’s third consecutive term in office. Photo: RaffiKojian

Nagorno-Karabakh is internationally recognized as belonging to Azerbaijan, but is populated mainly by Armenians, more so since mutual pogroms in 1994 expelled hundreds of thousands of Azerbaijanis and Armenians from their homes.

This year’s slaughter was not based on “ancient ethnic hatreds,” as is so often claimed for today’s regional conflicts. Rather, it is a product of the prospect for regional peace that had opened with the 2018 Armenian Revolution and subsequent national election that brought Pashinyan to power.

That election shut out the parties of the Armenian oligarchs and the most militant nationalists, the Republican Party and the Armenian Revolutionary Federation. Both Pashinyan and Aliyev had previously put forth reasonable positions for a negotiated settlement. Following the carnage, the current ceasefire agreement looks much like those proposals, with Azerbaijan regaining control of its territories that were occupied by Armenia in 1994 and Nagorno-Karabakh retaining a degree of autonomy.

Yet this is hardly a settlement. It remains hostage to those “men in suits” who offer the world nothing but continuing war. For many reasons, the world should pay more attention to this regional conflict.

The Armenian oligarchs take profits from Nagorno-Karabakh, from resource extraction to organized crime, including human trafficking, drugs, and weapons. They wish to regain their political power. The Russian mafia, Iranian Revolutionary Guards, and Azeri criminal groups have also all profited from the regional conflict.

Iran’s regime was placed in a difficult position, balancing between its support of Armenia and its oppressed and rebellious Azeri minority that staged a brief uprising in Tabriz, Iran.

Turkey’s President Recep Tayyip Erdoğan also bears responsibility. Aside from providing military aid to Azerbaijan, he has used appeals to ethnic and religious bigotry that recall the horrors of the Armenian genocide. Whatever humane or Muslim conscience he may have possessed has been rotted away by his drive to power and betrayal of the Syrian Revolution—as illustrated by revelations that the Turkish state-owned Halkbank laundered money for the genocidal Iranian regime as it slaughtered Syrians and Iranian oppositionists alike.

U.S. and Russian imperialism are allied to both sides of the conflict, and provide some arms. But what really made the difference in this year’s war was the presence of high-tech weapons. The devastation of Armenian tanks and positions by Israel-supplied drones, in particular, led some military historians to see a whole new stage in warfare.

In a world descending into high-tech surveillance state-capitalism, authoritarianism, and genocide apologetics, this new stage of warfare is enough reason for all humanity to take heed.

For almost three decades the U.S., Russia, and France have done nothing to resolve the issues fueling the conflict. More significant is the fact that the seven decades of Soviet Russian rule did nothing to deal with these issues, despite the state-capitalist Communist Party’s rhetoric of internationalism.

Following the 1917 Russian Revolution, the Caucasus nations saw a brief period of independence in which some of the same types of conflicts arose. By 1920, Stalin’s brutality toward Georgia led Lenin to see a lapse “into imperialist attitudes toward oppressed minorities.”

Lenin’s recognition of the role of Great Russian chauvinism was not only a political insight, but an opening onto the deepening of his philosophic perspective. It was the possibility, ended by ill health and imminent death, of working through his philosophic ambivalence and reconnecting with Karl Marx’s philosophy of revolution in permanence. Indeed, from the moment Marx formulated the idea of permanent revolution in reference to the “Jewish question,” the ultimate test of revolutionary thought was its concretization in regard to the national question.

This is why Raya Dunayevskaya, founder of Marxist-Humanism in the U.S., developed the philosophic category of Black masses as vanguard for the American revolution.

It was the aim of Marxist-Humanists’ work on Bosnia in the 1990s to continue the development of this perspective. Lacking this theoretical and practical development we see, as history has demonstrated once again in the Caucasus, there is no way to break the endless cycle of capital accumulation and war.