Announcing that he would withdraw the U.S. from the Paris Agreement on climate change, President Donald Trump spouted one self-serving lie after another. The key lie was that he was acting on behalf of U.S. workers.

His actions show he cares nothing about the lives of the workers of the U.S. and the world. His message is that their only role is to labor and be exploited by capitalists, whose profits are the same as the nation’s wealth. All the land’s resources—coal, oil, natural gas, soil, water, minerals, crops, livestock, and human beings who have to work for a living—are nothing to him unless they are exploited and turned into profits for capital.

In the process, the planet will be plunged into catastrophic climate change, dooming civilization and probably the human species, along with millions of other species.

REALITY OF CLIMATE CHAOS SINKS IN

Increasingly, people—even Republicans—are aware that climate change is real, without having to hear of the latest scientific studies of the accelerated melting of ice on Greenland and Antarctica, which could raise sea levels by over 20 feet; or that in eight years two-thirds of humanity will live in water-stressed conditions. This time Trump did not even repeat his usual lie that climate change is a hoax. He merely claimed that doing anything real about it would devastate the economy.

Trump’s words speak of “American workers, who I love….and I happen to love the coal miners.” But his actions have been to undo safety regulations and environmental protections for workers, to attack their healthcare coverage, reduce overtime pay requirements, appoint anti-labor administrators and judges like Supreme Court Justice Neil Gorsuch. 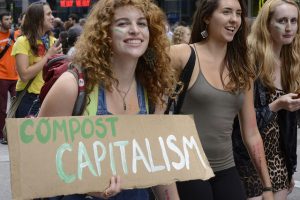 Prattling about “our economy, our workers, our sovereignty,” the con man in chief pictured other countries taking “our wealth.” He prefers the wealth created by workers be taken away by bosses and by parasites like himself, and natural resources and infrastructure be given away to corporations.

Trump claims that the Paris Agreement does not eliminate coal jobs but transfers them to other countries. This is as much a shell game as all his claims to save jobs. The reality is that capitalism always destroys jobs as well as communities and calls it progress.

How little protecting the economy has to do with the withdrawal is shown by the many big oil and other companies that wanted the U.S. to stay in the Paris Agreement. They do not fear it precisely because the agreement is so weak and inadequate. That Trump spurned their advice reveals that his aim is to attack all environmental and social movements. The negation of liberatory movements is as characteristic of his administration as it is of fascism.

Above all Trump is trying to divide white workers from such movements and prevent workers from having a voice as workers, as he fights their independent organizing and workplace regulations. Workers are supposed to think their interests are the same as those of the capitalists, in opposition to the workers of other countries who are supposedly “laughing at us.” We are supposed to be grateful for the privilege of having a job where we are exploited. Pay no attention to the con man laughing at the employees and contractors he refused to pay, and at the supporters who would vote for him even if he should “stand in the middle of 5th Avenue and shoot somebody.”

Despite Trump’s bluster, there will be no “new deal.” Weak as it is, the Paris Agreement is the best that international capitalism could come up with. From the 1992 Earth Summit to the 2015 Paris negotiations, the U.S. has been one of the biggest obstacles to stopping climate change. Trump’s policy reversal only pushes the greenhouse gas pedal to the metal, ratifying what he has set in motion on the policy front with efforts to roll back every environmental and safety regulation he can, such as Obama’s Clean Power Plan, and to open all fossil fuel reserves to exploitation.

The solution is not to spread illusions about international negotiations, Democratic politicians, or city and state “clean energy” projects. What is needed is to confront capitalism’s suicidal path both in immediate battles, such as the Indigenous-led resistance to the Dakota Access Pipeline and the many other struggles inspired by it (see “Standing Rock: the struggle continues,” March-April N&L), and in raising the banner of a new society of freely associated labor, where humanity and nature are not just the means to capital’s growth but where human power is its own end.

← The struggle for immigrants’ rights challenges humanity
Voices from the inside out: “I Am Not Your Negro” →
This work is licensed under a Creative Commons Attribution-ShareAlike 4.0 International License