The resistance to the Dakota Access Pipeline (DAPL) has become a beacon for all Indigenous peoples and all the forces trying to resist the ruling system—and has been assaulted with ferocious repression.

Members of hundreds of tribes from all over the U.S. have joined the Standing Rock Sioux Tribe at the Sacred Stone Camp in an unprecedented gathering of peoples, which has become the focal point for rising decolonization, environmental and other struggles by Indigenous peoples worldwide. Over 10,000 people have participated in the Camp and nearby direct actions. (Visit http://sacredstonecamp.org for information about how to join or support the camp.)

UNPRECEDENTED GATHERING, YOUTH AT THE FORE

The camp in a remote and often freezing part of North Dakota began on April 1, near where the pipeline, which is to carry up to 570,000 barrels of fracked Bakken shale oil daily to Illinois, is supposed to dive underneath the Missouri River. Its route was shifted from Bismarck to the Standing Rock area because of concerns that white people’s water could be polluted by oil spills.

Youth have been at the forefront from the start. Now they have formed the International Indigenous Youth Council, whose spokeswoman, Eryn Wise, says, “We as youth will not be deterred from our ultimate goal: killing the black snake and protecting the water….Our very existence is an act of resistance and we will resist the Dakota Access Pipeline every single day until justice is restored to our Mother.”

Hundreds of solidarity actions have taken place across the globe. (See reports on this page.) Where DAPL is to cross the Mississippi River in Iowa, a resistance camp began in August. Women there have blocked construction several times.

This struggle is about Native American sovereignty (see also “Demand Indigenous Peoples Day“), action on climate change, and environmental defense. It has become the front line in the clash between the existing capitalist system built on oil, coal, natural gas and nuclear power, and the reach for a new kind of society where human power is its own end.

That is manifested in the battle to stop the civilization-destroying momentum of always extracting more and more fossil fuels and uranium from the ground. Years of the climate movement finally drove President Obama to put his foot ever so lightly on the brake. But Donald Trump, who has investments in the company building DAPL, has promised to push the throttle to the floor, including restarting the Keystone XL pipeline halted by Obama. 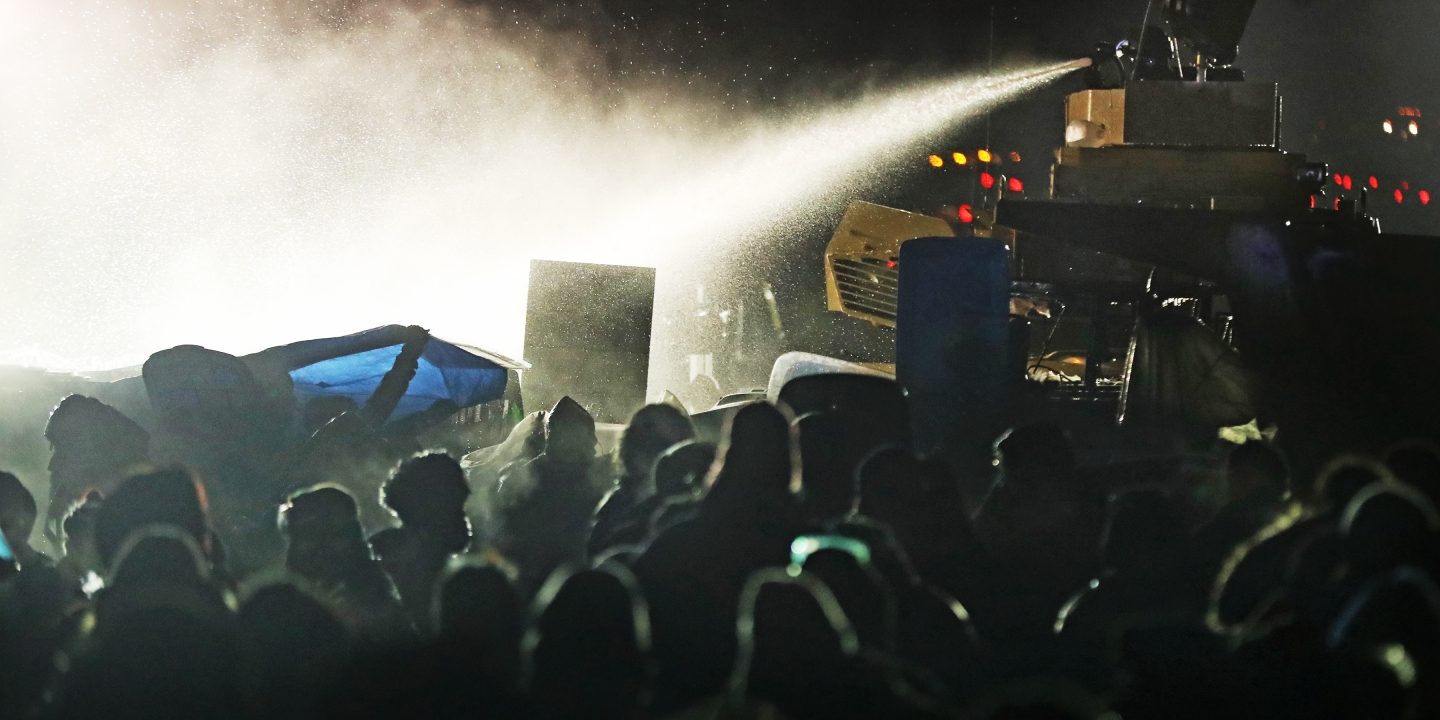 So it is that a band of nonviolent water protectors in a remote rural area found themselves under attack by hundreds of heavily armed police from seven states plus private security.

Over 400 people have been arrested. Another camp, the 1851 Treaty Camp, was set up in the DAPL path, reclaiming unceded Dakota territory included as part of the Standing Rock Reservation in the Ft. Laramie Treaty of 1851. Police violently cleared it. They used tear gas and pepper spray, concussion grenades, shotguns firing bags full of lead shot (“bean bag rounds”), rubber bullets, tasers and a sound cannon.

Cops hit two medics with batons and pulled another medic out of a car he was driving. Another water protector jumped into the car to stop it from running people over.

Linda Black Elk, a medic, reported, “Rows upon rows of white armored militarized police were firing indiscriminately into the water at brown people who were swimming, risking hypothermia, and rowing kayaks and canoes to protect the water and stop a pipeline.”

The world recoiled at images of vicious dogs, snouts red with their victims’ blood, and of wounded protectors confronted by ranks of fully militarized police in riot gear, deploying military-grade Humvees, armored vehicles and assault rifles. 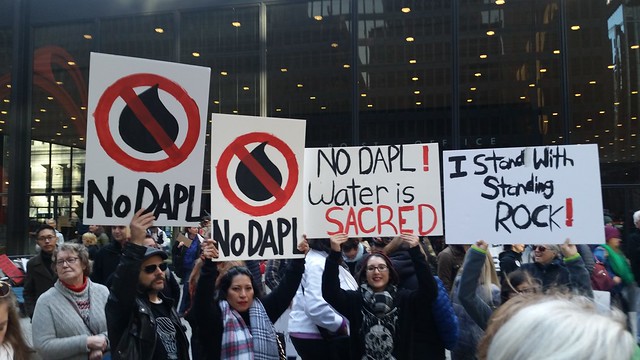 Once again the freedom movements have exposed the hollowness of so-called American democracy. Where Presidents Eisenhower and Johnson were finally forced to send in the National Guard, no such move has yet been made by the current administration.

The federal government has not even followed its own laws. Not only did the Army Corps of Engineers fail to consult the recognized tribal government, it issued permits without a full Environmental Impact Statement and in violation of several statutes. When DAPL construction intentionally destroyed numerous sacred and cultural sites in order to preempt their protection, the Corps failed to invoke the law that would, based on this violation, prohibit issuing any more permits.

Instead, President Obama tried to defuse the movement by calling for the Corps to consider rerouting the pipeline. “Don’t reroute it! Shut it down!” was the deafening response.

The repression got so outrageous that two police officers reportedly quit, saying this is not what they signed up for. And Sheriff Dave Mahoney of Wisconsin’s Dane County pulled his deputies out of North Dakota, explaining that “a wide cross-section of the community…share the opinion that our deputies should not be involved in this situation.”

The struggle in North Dakota is a powerful manifestation of the vast forces stirring to put all of American civilization on trial. The time is now to support this struggle in practice and in thought.

One thought on “Editorial: Stop the Dakota Access Pipeline now!”