During September and October the four-month protests by the teachers against the “educational reform” came to an end. The National Indigenous Congress (CNI) and the Zapatista Army for National Liberation (EZLN) made a proposal for having an Indigenous Governing Council, represented by an Indigenous woman, participate in the 2018 presidential elections.

NEW PHASE OF TEACHERS’ MOVEMENT
In the middle of September the dissident teachers decided to end their strikes and sit-ins against the “educational reform.” They had failed to force the government to call the “reform” off. However, as a spokesperson from Chiapas posed it: “The fact that we aren’t right now in the streets doesn’t mean that the movement is over. We have retreated to our communities, [for] we’ve understood that our task is to be in constant dialogue with them.”

It is time to go back to the communities, with whom the teachers have been working for years, and whose residents supported them fully in their protests. It is from there where the idea and practice of a non-capitalist, non-elitist education can keep developing which would be in tune with the desires of the masses. 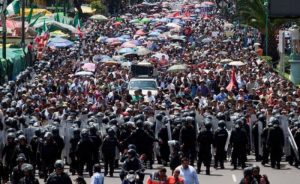 After four months of facing the government’s refusal to listen to the teachers, as well as its repression, has the time come for the movement to make a leap forward and work harder on the creation of its autonomy? In that case, what would be the responsibility of revolutionary activist-thinkers?

From Oct. 9-14 the Indigenous communities—including the Zapatistas—held their fifth congress in San Cristóbal de las Casas, Chiapas. At the end they declared “to name an Indigenous Governing Council whose will would be manifest by an indigenous woman, a CNI delegate, as an independent candidate to the presidency of the country under the name of the CNI and the EZLN in the electoral process of 2018.”

After this announcement, a large number of “critics from the Left” accused the EZLN and the CNI of being naïve and “idealistic,” and denounced them for colluding with the government to divide the votes of the “Left.” The truth is, however, that the proposal opened a new way forward for the masses, especially for the Indigenous peoples. As the EZLN-CNI communication states: “Our struggle is not for power, which we do not seek. Rather, we call on all of the ordinary peoples and civil society to organize to put a stop to this destruction and strengthen our resistances and rebellions, that is, the defense of the life of every person, family, collective, community, or barrio.”

This new proposal is an extension of EZLN-CNI’s decades-long effort of building autonomy from below—its “revolutionary methodology.” As a CNI representative said: “It is about using the electoral period to build what is ours.” It aims to elicit the voices and actions of those from below, nationwide, in order to know how they are resisting capitalism and, at the same time, trying to build something new. Indeed, at the forums organized since then by Zapatista supporters, we have been able to hear the Indigenous people themselves, especially Indigenous women.

It is this way of working which constitutes the greatest strength and gives revolutionary meaning to the EZLN-CNI experience. In Mexico we now have the opportunity to take part in this new moment opened by the fifth CNI: Helping to develop the actions and thoughts of the oppressed in the cities and countryside, to the point where a new society could be born. This future society, as the Zapatistas say, “is only possible upon the ruins of capitalism.” Are we up to the task?

← Editorial: Stop the Dakota Access Pipeline now!
Voices From The Inside Out: Wisconsin prison destroys books →
This work is licensed under a Creative Commons Attribution-ShareAlike 4.0 International License