The Oct. 27 massacre of 11 Jewish congregants at Pittsburgh’s Tree of Life synagogue is the single deadliest anti-Semitic attack in U.S. history. The motive, as stated by the terrorist himself, was a hatred of Jewish support for Middle Eastern and Latin American immigrants through the organization HIAS. That this vile act echoes what has become so mainstreamed in political rhetoric worldwide—the hatred of immigrants, and the promotion of ethnic chauvinism—is a measure of the inhumanity of that politics, and of this moment of capitalist degradation.

“BECAUSE…THEY WERE JEWS!” is the title David Friedmann called his series created to fight anti-Semitism and race hatred.

This terrorist attack raises the specter of the massacres at Srebrenica, Utoya Island, East Ghouta, and so many other racist, counter-revolutionary crimes, just as those crimes can only be fully understood in relation to the Holocaust.

Trump himself condemned this act. But he can’t distance himself from his share of responsibility. His courting of the “alt right” during the 2016 presidential campaign mobilized the racist dregs of society and fired their imagination with visions of state power reminiscent of 1930s fascism.

Trump’s ideologue Stephen Bannon was key to this. It first led to the murder of Heather Heyer in Charlottesville by another neo-Nazi. Since then, Trump has distanced himself from Bannon formally, though Bannon’s promotion of Trumpism continues to dredge up such hatred through the promotion of anti-immigrant forces in Europe, as well as through his online propaganda film for the U.S. midterm elections, Trump at War.

Some neo-Nazis, like the terrorist murderer in Pittsburgh, have become disillusioned as Bannon’s activity shifted from the center of U.S. power to the margins—and it is notable that Bannon’s own recent rallies in New York State have only drawn a few dozen. The massacre in Pittsburgh reflects the terrorist’s fading dream of a new Holocaust. 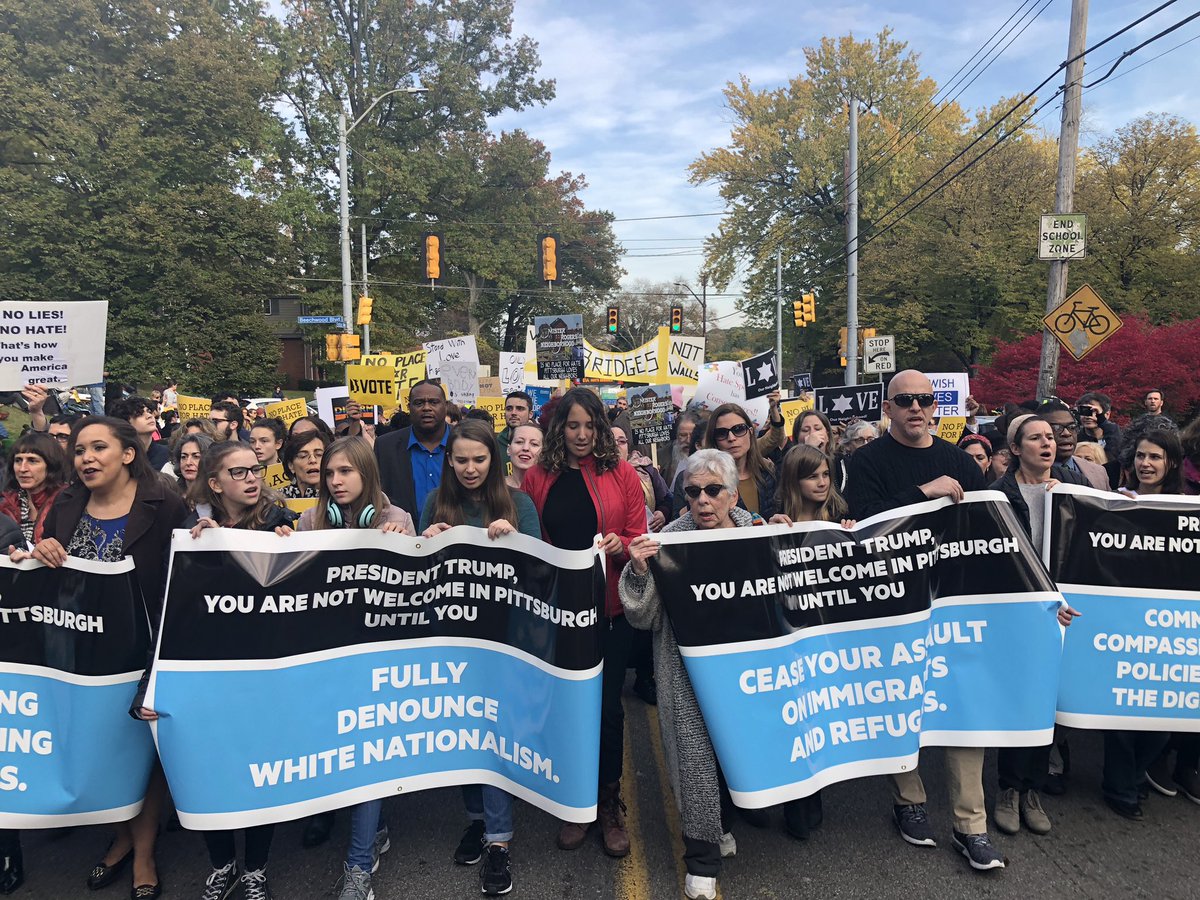 Several thousand protestors gathered at The Tree of Life synagogue on Oct. 30, 2018, to protest Donald Trump’s visit. So thick was the crowd that his motorcade was forced to go in a different direction. Photo: twitter.com/miguelmarquez/status/1057371618262089733

Trump’s belated condemnation of anti-Semitism will, at best, serve only to drive these demons back partly underground. As Woody Guthrie, in the 1950s, wrote of Trump’s own father, “I suppose Old Man Trump knows just how much racial hate he stirred up in the bloodpot of human hearts when he drawed that color line here at his eighteen hundred family [housing] project.”

The capitalist ruling class remains unable to solve any fundamental social problem, either in peace or in war, and so keeps its bloodpots simmering in the racist underworld of history. Every hint of this, every whisper, every pointed silence of Trump and any other ruling class politician or ideologue must be utterly condemned.

This question is bigger than Trump and his personal responsibility, however. Karl Marx’s critique of bourgeois society, and his vision of social revolution, first took form in a grappling with the question of European anti-Semitism. It is inseparable from his vision of humanism as the “solution to the riddle of history.”

Concretely, the issue of anti-Semitism in Europe, with its culmination in Nazism and genocide, was as significant a test for “Marxists,” for the revolutionary movement, as was the Black Dimension in the U.S. through Abolitionism, the Civil War, and until today. As Raya Dunayevskaya, founder of Marxist-Humanism in the U.S., wrote in “The Roots of Anti-Semitism“:

Under the open sore of the persecution of a minority is hidden the greater truth of exploitation—that the exploiters, not the exploited, are the minority. Within this greater truth will be found the answer as to why a specific scapegoat is chosen at a particular time at each separate stage of capitalism’s development.

Too often nominal revolutionaries have failed this test, from the Second International in the 1890s declaring that anti-Semitism and “philo-Semitism” were equal problems (as though Europe suffered from “philo-Semitism”) to the counter-revolutionary Stalinist whispering campaigns against Trotsky in the 1920s, the Hitler-Stalin Pact in 1939 that gave Hitler the green light for the invasion of Poland, the post-World War II fabrication of the “doctors’ plot” and the night of the murdered poets in Russia, and the Rudolf Slansky trial in occupied Czechoslovakia.

Anti-Semitism was a measure of the transformation of social revolution into the worst form of counter-revolution. Any “Marxism” that decenters the issue of anti-Semitism declares itself theoretically and practically dead and without a future.

The massacre at the Tree of Life synagogue was a modern pogrom, with assault weapons, social media presence, and poisoned roots in the current stage of world counter-revolution represented by Trump, Putin, and their like. History has shown that only an absolute opposition, a revolution in permanence, can hope to uproot this inhuman horror.

2 thoughts on “Massacre of Jews measures the inhumanity of capitalism”

← Solidarity with Trans people under attack by Trumpism
Review: The Feeling of Being Watched →
This work is licensed under a Creative Commons Attribution-ShareAlike 4.0 International License