“The whole question of the relationship of any ongoing event with the past, with the very concept of Archives, depends on the two opposite words—continuity and discontinuity. Whereas only great divides in epochs, in cognition, in personality, are crucial, and may relate to turning points in history, no discontinuity can really achieve that type of new epochal ‘moment’ unless it has established continuity with the historic course of human development.”

When Dunayevskaya donated her Archives to Wayne State University, she made two stipulations: first, that she would organize the Archives herself, and, second, that they would be open to anyone who wanted to study them. 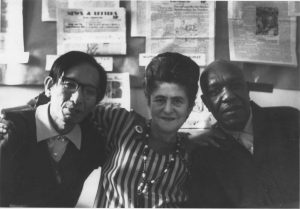 Yoshimasa Yukiyama, translator of the Japanese edition of Marxism
and Freedom; Raya Dunayevskaya; and Charles Denby (1969)

The new website of the Raya Dunayevskaya Memorial Fund presents the Raya Dunayevskaya Collection as she organized it herself, together with the posthumous Supplement. Importantly, it makes the Archives available to anyone who can access the website: theoretically over three billion people. This is in addition to the entire 60 years of News & Letters newspaper available on the News and Letters Committees website. The first 55 years are also hosted on the Marxists Internet Archive.

This is an incredible resource for revolutionaries and scholars, seeking not only to understand the history of freedom struggles and the conditions in which they occur but to advance them today so as to transform the world. The Collection encompasses the body of ideas of Marxist-Humanism developed by Dunayevskaya during a lifetime in the revolutionary movement. Its over 17,000 pages are a resource for students, researchers and activists in fields as diverse as philosophy, women’s studies, social theory, intellectual history and Black studies. Her writings spanned the world: her contributions to Soviet and East European studies, as well as to African and Middle Eastern regional studies, have been widely praised. 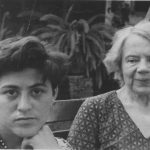 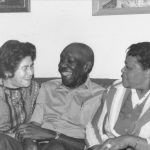 Raya Dunayevskaya; Charles Denby, editor of News & Letters and author of Indignant Heart;
and Ethel Dunbar, “Way of the World” columnist and contributor to Indignant Heart

Stay tuned as new additions to both websites go online in coming months.

Marxist-Humanism: A Half-Century of Its World Development

PART ONE: Birth and Development of State-Capitalist Theory

PART TWO: Creation of Marxist-Humanism as Organization — News and Letters Committees — and as Theory for Our Age

SUPPLEMENT TO THE RAYA DUNAYEVSKAYA COLLECTION

Donations to keep making additions to the RDMF website can be sent to:
The Raya Dunayevskaya Memorial Fund, 228 S. Wabash, Room 230, Chicago, IL 60604.

Announcement from the July-August 2015 issue of News & Letters

← From the Writings of Raya Dunayevskaya: The meaning of revolutionary archives
In-person report from Yemen: Houthis gun down homeless man in Taiz →
This work is licensed under a Creative Commons Attribution-ShareAlike 4.0 International License