Mexico City—The horrendous oil pipeline explosion in Tlahuelilpan, Mexico, which killed over 100 campesinos and injured many more, has shaken all of Mexico. This was a tragedy long in the making. 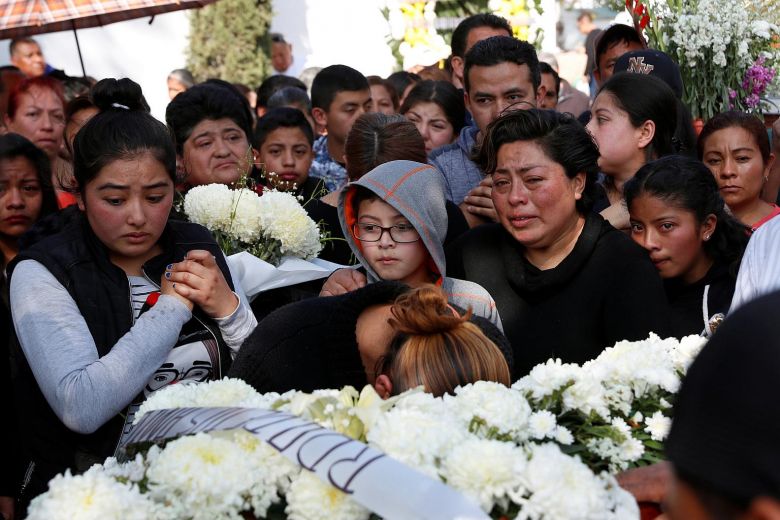 Family and friends mourning one of those killed in the pipeline explosion in Tlahuelilpan.

In 1938 President Lázaro Cárdenas nationalized the oil industry. But oil has never been under the control of Mexico’s masses. El huachicoleo (the robbing of oil from pipelines) has occurred for decades. One Tlahuelilpan resident said, “They do it out of necessity, because of hunger. There’s no work here, and people earn very little farming.”

Recently the oil taps, now under the control of organized criminal gangs, have risen exponentially to over 10,000 a year. The tapped oil is worth some 65 billion pesos. This could not happen without the complicity of workers and administrators in the state oil company PEMEX, elements in the army charged with guarding the pipelines, and government administrators who ignore the robbery of Mexico’s natural resources.

El huachicoleo is almost an identical twin to the narco-trafficking that has deeply wounded our country. They each expose the nature of Mexico’s ruling elites and their enforcers over decades.

The citizens of Tlahuelilpan and other rural communities in Hidalgo and Puebla see the oil pipelines cross their territory with “black gold” while they struggle to exist. The six municipalities of Puebla are part of the Red Triangle of huachicol where 70-80% of the population live in poverty.

For decades federal and state governments ignored these communities. This created space for criminal gangs to “milk” the oil from pipelines, coercing people to go along with it, providing illegal jobs where no legal ones exist. These jobs have the ever-present danger of fires, explosions and death. They also promise gasoline at a bargain even as the price of gasoline skyrockets.

Where previous governments had at best ignored el huachicoleo, President López Obrador, with his pledge to fight corruption, decided to confront it. The gangs retaliated by increasing the tapping of oil pipes. Then came the tragedy at Tlahuelilpan.

To his credit Obrador immediately went to Tlahuelilpan. He didn’t blame the victims, noting that they acted out of necessity. He implemented a government aid program, but only for some.

But where are the funds to make a difference in these communities? Some have been promised money and services, but not those in the Red Triangle. Can aid, instituted top-down from the government, make a difference? Self-determination for these communities—as the Zapatistas have practiced—is not discussed. Autonomy cannot be instituted from above by the government, but needs to come from the self-organizing of the communities. For that, social movements are needed.

Obrador’s project is an acceptance of capitalism. He is opposed to vulgar neoliberal excesses, and is willing to have more state regulation and private-state joint projects. But central to his program is his acceptance of extractive capitalism. He has never challenged capitalism’s premise of production and more production, of the exploitation of human labor power as the basis of society’s development. His program leaves no room for human liberation.

Tlahuelilpan is not only a human tragedy, but an indication of our social reality. The only way to overcome that reality, the contradictions we live under—corruption, despoliation of the land, displacement of original peoples, lack of meaningful work for millions, sexism and racism—is through social transformation: a dual movement of destroying the old social order and constructing a new one.

It is a revolution in action and in thought that does not come from above, but from social movements in unity with working out a philosophy of human emancipation. Anything less will be unable to uproot corruption, overthrow class society with its sexism and racism (that is, capitalism), and open the door to genuine freedom.