TRUMPISM AND THE MANY FACETS OF RESISTANCE

One of the 250,000 demonstrating against Trump in the Chicago Women’s March. News & Letters photo by Terry Moon

I marched in the Women’s March in Chicago Jan. 21 with several altos from my choral group. We all got separated from one another but it didn’t matter because everyone was so kind and friendly! People warned each other to watch for puddles, curbs, grates in the street and potholes; city workers trapped in trucks that couldn’t go anywhere because of the huge crowds stuck their heads out of their windows with big smiles, giving us an assessment of the latest numbers for the size of our outpouring. It was an incredible experience that I will never forget. There were 250,000 people protesting in fear of the unknown horror that could be unleashed upon us and not one violent incident.

I’m waiting to hear all the outraged comments about the latest fascist in a fascist cabinet: Jeff Sessions. As a veteran of the 1960s who remembers FBI infiltration, murders and harassment, I think it is worthy of comment that this creepy racist Nazi is now in charge of the FBI, among hundreds of other government agencies.

On the same day when the Conservative Political Action Committee had Trump’s advisor Steve Bannon speak on their stage, they expelled neo-Nazi Richard Spencer, calling the “alt-right” a “left-wing fascist group.” How delusional! The Right embraces its fascist progeny with one hand while waving them away with the other.

I enjoyed Franklin Dmitryev’s article (“Inauguration of neo-fascism faces widespread revolt,” Jan.-Feb. N&L). However, he makes a common mistake that reflects the constantly repeated big lie of all history, social studies and political science classes in the U.S.: that the 13th Amendment ended slavery. The Amendment makes an exception for “punishment for crime whereof the party shall have been duly convicted.” Slavery is legal! Just convict ‘em of any of the thousands of “crimes” across the U.S., and they are now property of the state—a slave. The 13th Amendment is used anytime a prisoner files a court claim for wages to be paid for his forced labor in the prison. “No pay for you, slave,” the judge always rules. The fact that slavery is legal in the U$, and that millions are slaves (not just prisoners, but persons forced to do “volunteer work”) and are working for The Man/The System every day, has now been recognized by the American Correctional Association—the folks that “certify” prisons as being “acceptable.”

President Donald Trump wants to tear families apart through his immigration policies. This would cause parents and children to be uprooted and torn apart, as if they were trash, not human beings. That is extremely mean. He is targeting specific races. How does he get the right to do this? Are we going to stand by and allow this to happen? I believe in treating all people as human beings. But instead of mutual support and growth, we are led to believe others are only a danger and an enemy; are only stepping stones to “success.” Unfortunately, success is not developing our humanity to the best we can be. I am glad to see protests concerning this. Everyone’s voice needs to be heard. All human beings should be treated with dignity and respect. Each person is a valuable life. “Love thy neighbor as thyself.”

In every case, when government turns citizens into informers, abuses proliferate. The narrative is that undocumented immigrants (or all immigrants from south of the border) are criminals and not exploited victims. Don’t think about all the people whose employers stole their wages, made them work in terrible conditions, confiscated their passports, at times treated them like slaves. How many of them make it into court to sue the employers? And now it will be fewer because in the time of Trump, may it be brief, the fear of being deported for speaking up for your rights is much greater.

The unchallenged executive order that authorized the internment of West Coast Japanese Americans in 1942 is the reason you hear that rounding up people into concentration camps is legal in the U.S. Yet there were labor strikes and draft resistance in the camps. Wartime dissidence within the “quiet minority” should give today’s White House totalitarians pause for concern in their plans to contain millions of Muslims and Latinos. Today’s mass outpourings in defense of anyone and everyone under attack from the most hate-filled regime in U.S. history show a growing movement in search of a thoroughgoing humanism that will signal the dawn of a post-Trump future.

As a Transgender woman and member of the LGBT community, I fear for the future of myself and those I consider family. I can already see all of the progress that has been painstakingly made toward LGBT equality becoming unraveled. It’s only a matter of time before the lance of fascist hate becomes directed towards us.

Donald Trump and his fascist regime have declared war on Queer people. Trump and Mike Pence vow to make so-called religious liberty the law of the land and Trump ordered the lifting of President Obama’s guidance to schools to let Transgender and gender nonconforming students use the restrooms and locker rooms in accordance with their gender identities (let’s leave it to the states…ughhhhh!). Fortunately, there are inspiring and hope-giving actions for freedom, from the rally in D.C. before Trump signed his anti-Trans order to similar rallies in Chicago and New York City after the signing to the sleepouts for homeless youth, including LGBT youth, in New York and Chicago. We will keep fighting for Queer liberation!

Not-legitimate Pres. Trump is surrounded by a bunch of white men as he resurrects the so-called “Mexico City” abortion gag rule, banning U.S. funding to any foreign NGOs that state abortion as an option and/or perform abortions. It’s a blatant illustration of the misogyny with which this presidency is fraught. Also, and importantly, many, many women and children will suffer because of this policy. There will be more women and children living in poverty, more children dying of hunger; the rate of maternal and infant mortality will rise. These are only a few examples of the kinds of suffering that will result from this harmful gag rule ordered by every Republican president since Ronald Reagan. All women deserve the full range of healthcare; all people deserve every chance to thrive.

“Syrian Women as Force and Revolutionary Reason” (Jan.-Feb. N&L) is a powerful tribute to Syrian women and clearly describes their revolutionary ideas and brave actions that inspire all of us. Although the mainstream media lumps ISIS terrorists with the true revolution of Syrians creating new human relations in the face of extreme brutality, we have a responsibility to ensure that articles like this get the widest possible audience. Visit the underground newspaper, Enab Baladi (http://english.enabbaladi.net). I’m sharing this article on my Facebook page—what about you?

We in Mexico City decided to initiate a study circle about Women’s Liberation and the National Indigenous Congress proposal to create an Indigenous Governing Council from which a woman will be selected to participate in the 2018 presidential elections. By being part of the Zapatista Army for National Liberation (EZLN), women didn’t just learn military tactics but “showed us another way to fight,” as the spokesman of the EZLN said: without bullets, but working with the Indigenous communities to create new human relationships, especially those between men and women. Without the participation of women, the Zapatista liberation movement wouldn’t be what it is right now.

The article by Terry Moon (“Syrian women as force and revolutionary Reason,” Jan.-Feb. N&L) shows us how the participation of women in the Syrian revolution has been crucial, deepening it and giving us insight about where to go next. Ordinary women, acting spontaneously, challenged ISIS, created radio stations, published clandestine papers and broadcast from their homes when public protests were no longer an option. Women, as force and reason of revolution, showed us with their actions a way forward on the road to revolution. We’d like to discuss this article as part of our study circle.

After three years behind bars and two years of house detention, Marissa Alexander was finally released from state confinement. Marissa Alexander has been punished for over five years for defending her life from a domestic violence attack that threatened her life nine days after she gave birth. The Free Marissa Now Mobilization Campaign is thrilled that we have finally made it to the day that we can say Marissa Alexander has her freedom. We are honored to share this statement from Marissa and her family: “We are grateful to God that this chapter of Marissa’s life will come to a close on Jan. 27, 2017. We are sincerely thankful and appreciative to all who rallied, supported and prayed for Marissa’s release. As she enters a new chapter, with endless possibilities, we ask that you will continue to support Marissa through her non-profit organization that was established to end domestic violence and injustice in the criminal justice system, The Marissa Alexander Justice Project. Without you, today would not be possible. Thank you again and again.”

I was dismayed to see that some of those who want to take credit for calling for the Women’s Strike in the U.S. were people from ISO, other Trotskyists and vanguardists. The statement too—although touching all the right intersectional spots—was preachy, what we ought to be doing.

Pedantically they hated “Lean-in feminism” so much that they had to trash it three times in a page and a half statement. I hate it too, but it has already been rejected thoroughly by any feminist in touch with working or poor women. They do mention—but barely—the Women’s March on Washington in the first sentence, and the next one is: “But what exactly will be the focus (of a new wave of militant feminist struggle)?” Well, god forbid they should talk about what actually came from the March or let women work it out in the grassroots. No, they will tell us what we should all be doing.

Anti-abortionists cannot claim to be feminists! We have to be clear that they are not just anti-choicers, they are a political movement that exists for the purpose of creating laws to degrade our dignity and oppress us. Feminism isn’t about choice, such as “My choice to try to control your life and body.” It’s about liberation. That’s what our movement is for. The anti-choicers are organizing to take away our freedom, period. Legislating women’s lives and bodies is the opposite of feminism! The press makes me sick in buying into this “prolife feminist” crap. No. We need to reclaim that title. 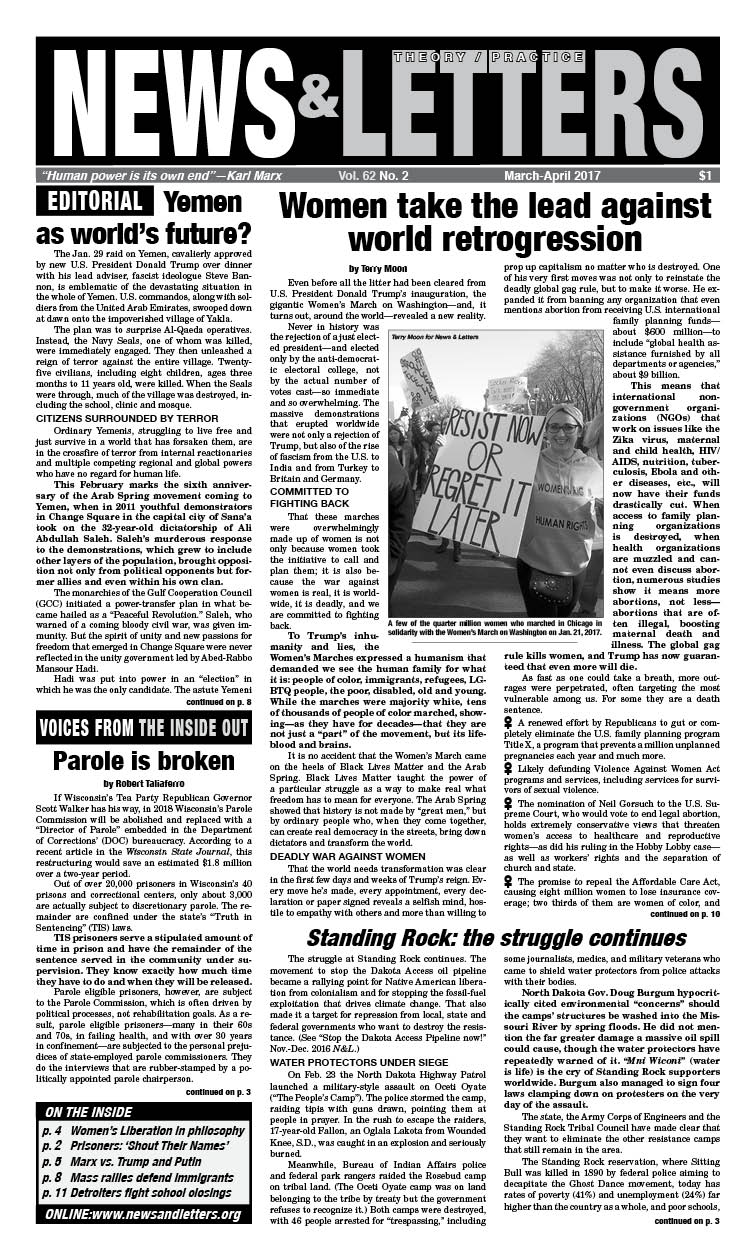 Would you like to sell News & Letters at your newsstand, bookstore, demonstrations or other venues? We will send you bulk orders of five or more copies for 25 cents each. Help change the world and spread the word by distributing the only Marxist-Humanist newspaper in the world.