Tunisia’s President Kais Saied has now completed a counter-revolution that is aimed at ending the Arab Spring that the Tunisian masses launched in December 2010. Since coming to power in 2019, he has gotten rid of Parliament and ended judicial oversight, and now has maneuvered a new constitution for the country. This gives him almost total power. 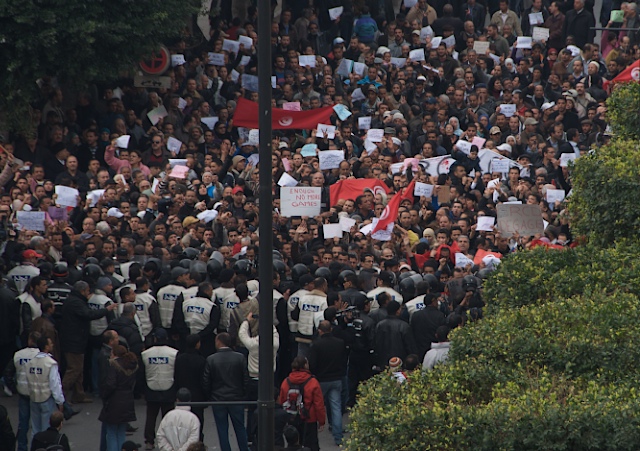 His one-man rule has not stopped the social-political-economic contradictions at the heart of Tunisia’s difficulties, but rather has only exacerbated them. Along with massive unemployment, particularly among the youth, and a staggering debt, Tunisia is now faced with the fact that basic food commodities—sugar, tea and flour—are in short supply.

Saied has no solution to any of these problems, only authoritarian rule to try and keep everyone in line, including punishing journalists and anyone else who criticizes the government. He has also cracked down on the moderate Islamist party Ennahda. Ennahda was closely involved in the post-2011 Revolutionary governments that tried to rule, but often diverted and even subverted the gains and hopes of those who made the revolution for almost a decade.

One cannot understand how Saied could come to power, disrupting and manipulating the government, without looking briefly at some of the limitations and tensions post the 2011 Revolution. Four difficulties stand out:

2) The limitations of seeking a political transformation of society without fully tackling the needed social/economic framework that was strangling Tunisian and other Middle East societies involved in the great Arab Spring uprisings.

3) The failure to overcome the economic problems of mass unemployment and debt that characterized Tunisian society and which only became worse after 2011. To solve unemployment, government employment was expanded by the tens of thousands, but with no means to pay salaries except through borrowing and more borrowing. Debt mounted.

No real solution to the vast problem of unemployment could be found within the capitalist framework in an underdeveloped country. This was part of the limitation of all the Arab Spring Revolutions.

4) A 2015 amnesty was granted to all the leaders involved in the repressive, corrupt regime in power prior to 2011. Without even a trial, the government freely gave pardons to those who robbed the country and murdered revolutionaries, leaving the Tunisian population stunned and disgusted.

By 2019 the door was open to the false alternative of Kais Saied.